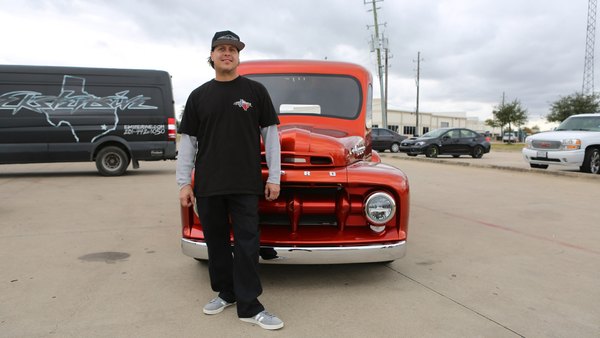 Texas Metal is a reality TV program first debuted on 7th November 2018 on Velocity. The series chronicles around Bill Carlton and his crew who have dozens of fans won thousands of awards and always fulfil customer’s demands. The most challenging part of their job is that they have to rebuild the cars in scheduled timelines. Monthly, they build between 25 to 30 monster trucks to muscle cars. Bill Carlton is always ready for challenges. He is the creator behind Houston’s Ekstensive Metal Works. With the help of his crew, he creates one of the greatest works in the country. Till date, they have worked on cars and trucks like a 2014 Porsche 911, a 1961 Cadillac DeVille, a 1966 Chevrolet C10, a 1955 Chevy Truck, a 1967 Lincoln Continental and many more. The audience can get to witness everything bigger and badder only in this series. Bill really knows how to turn ordinary into extraordinary by adding outrageous materials. The series also shows extra details of the work done by Bill and his crew.

“We’ve learned from our hit series IRON RESURRECTION that Texas isn’t just rich with oil – it’s full of innovative, skilled experts who know how to build trucks and build them big,” said Robert S. Scanlon, president of Velocity and TEN video content. “TEXAS METAL has all of those ingredients and delivers process, which is something that is extremely important to our audience. We’re excited to welcome Bill and the Ekstensive team to Velocity and can’t wait for viewers to see the incredible, detailed full-service work they do.”

Bill Carlton is the main cast and host of this series. In 1976, his father had bought the property from Sunny Drive, and he used it to sell various supplies including steel and welding materials. After completing his high school, Carlton stepped into his family business. Later on, he decided to turn the fun and passion of rebuilding vehicles into business. Today, he himself has become an expert at transforming old cars and trucks into powerful and beautiful vehicles. He is living a happily married life with his wife Jennifer. He also has three children named Corbin, Presley, and Keegan.

Eliud Reyes- He is an employee at Ekstensive Metal Works.

Tim Donelson- Tim lives in Friendswood, Texas, but originally belongs from Alvin Texas. His passion for cars has brother him to the show. Even his Facebook account and page is filled with promotions of the show Texas Metal and cars.

Jamie Marshall- He is a welder-fabricator at Ekstensive Metal Works. He also works at Auto Body Solutions as a painter, welder, and fabricator.

Rudy Mora- He has been working at Ekstensive Metal Works since May 2007.

Valerie Nicole- Nicole has been part of this show since the beginning Texas Metal. She is the only woman working at Ekstensive Metal Works.

Texas Metal Season 3 Plot: What is it about?

In this series, the skills and the techniques of Bill and his gang gets tested as they reconstruct, remodels, add more custom features to convert a car or a truck. The series also shows behind the scene details of the work done by Bill and his crew. The crew recreates some outrageous and amazing trucks and cars in Texas Metal. In one of the episodes, Bill and his metal geniuses recreated a ’48 Mercury from inside out, giving it a bolder look.

Bill returns in the second season with a bang to excite his car fans with new models. In the first episode, a customer wants Bill to fix the standards for custom SUVs a new white Yukon Denali. The crew starts working on the car and update body mods, handmade chassis, twin turbos and interior of the car. The guys also recreate a ’48 Mercury from inside out, giving it a bolder look. In the next episode, an owner wants Bill and his crew to create a gangster look for his 2018 Camaro ZL1. The crew start working on this sports car and change its interior as well as handmade chassis. A new client approaches them wants the frame to be dropped in his luxurious Sierra Denali. After completing the other clients work, they get back to complete 2018 Camaro ZL1. To add more power to the car, the gang needs to remake the engine before it is sent to a dynamometer. The crew also tries to add more features to convert patinaed ’49 GMC pickup sleeper truck into a keeper truck as per the client’s wish.

In the next episode, the skills and the techniques of Bill and his gang are about to get tested. They are widely popular for reconstructing custom metal work. Their work gets judged when they transform a 1940 International Harvester water truck into a mobile barbecue pit. Later on, Bill and his guys rebuild a classic 1986 C-10 which belongs to their most precious car family. It gets remodelled and reconstructed for future generations.

In the next episode, the gang adds custom touches to the car including a bed, adding interior and reconstructing it from inside to outside. The crew lays their hands on a 2018 Dodge Demon which needs some modifications to run smoothly on the track. The crew has to rebuild various truck and car models, but never a Ford Bronco. This time they have to transform a rusted ’68 Bronco roadster without any mistake. They have to remake waterproof interior, handmade dash as well as the supercharged engine. A neighbour of Bill’s gives his ’52 Ford F4 Milk Truck which has been corroded and gored with bullet holes. The crew will have to bring out their inner expert and change the sixty-year-old milk truck into a unique as well as a modern hot rod. Bill and his crew have to transform a damaged shell of a 1970 Suburban car hauler into a high-end diesel car. In the next episode, the metal geniuses also lay their hands on F150 and convert into a new model for charity in the military as well as troops. Bill’s own innovation of a 2018 Yukon Denali XL gets highly praised by all. In the next episode, Bill and his crew rebuild a wrecked 1970 Suburban hauler by changing four doors, long bed, suspension as well as a crew cab with a diesel engine.

Texas Metal Season 3 Release Date: When will it premiere?

Automobile lovers have given positive feedback to this series so far and all the credit goes to the hard-working crew of Ekstensive Metal Works who are developing flashiest, biggest as well as one of the most creative builds in Texas. Fans are hopeful that the third season will be renewed soon. We can’t tell anything unless and until the makers announce the air date for the season 3. Stay tuned for more information.

Velocity had not released a trailer for Texas Metal season 3 because it is  not yet renewed. For now, you can watch a sneak peek video from season 1 below: