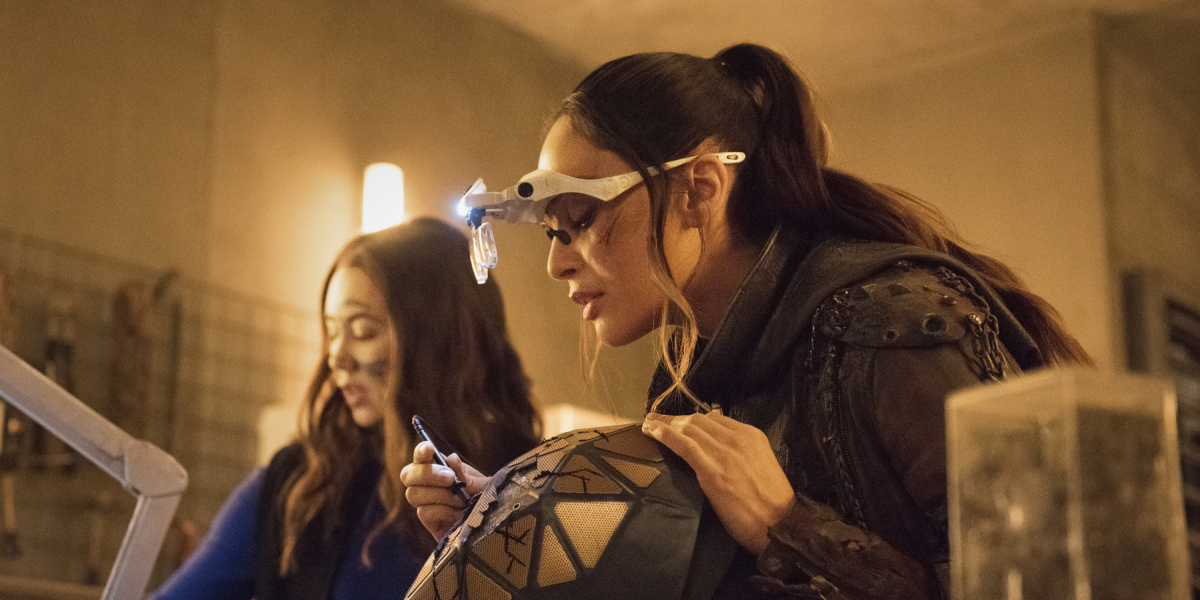 Season 7 of ‘The 100’ has thrown so many nail-biting moments and life or death situations at fans. Clarke and her friends have been forced to say more than a few heart-wrenching goodbyes. Well, the seventh and final season of the sci-fi series is nearing the finish line. In the latest installment titled ‘A Sort of Homecoming,’ Clarke, Octavia, Emori, Murphy, Echo, Raven, and others reunite on Earth, precisely in the Second Dawn bunker. When everyone inquires about Bellamy, Clarke confesses that she had to kill him for everyone’s good.

Back at Bardo, Shepherd and Sheidheda strike a deal in which the one-eyed Dark Commander has to bring Madi to Shepherd in exchange for Sanctum. Well, Sheidheda lands in the bunker and kills Gabriel while looking for Madi. Ultimately, Indra, Gaia, and Octavia fight him, and he goes back to Bardo. To ensure that no else dies because of her, Madi thrusts Sheidheda’s knife in her gut in front of Clarke and gets sucked straight to Bardo. While the portal is still open, Shepherd sends a bomb that destroys parts of the bunker that traps Emori and Murphy.

Previous seasons of ‘The 100’ are currently streaming on Netflix US. In several countries, fans can watch new, weekly episodes on the streamer. However, US viewers will be able to binge season 7 after it finishes airing on The CW, i.e., sometime around September 2020. You can also live-stream The CW with an active subscription to Hulu + Live TV, Fubo TV, and AT&T TV NOW. Finally, you can rent already released episodes on Amazon as well.

The upcoming episode is titled ‘The Dying of the Light.’

In the penultimate episode, we can expect Clarke and Octavia to pull out all stops to liberate Madi from the evil clutches of Sheidheda and Shepherd. While Clarke might leave for Bardo to bring back her daughter, the Disciples might try to use the moment to their advantage and proceed to fight for whatever they want. The gang might have to keep their guards up at all times, as the last war looms in the background. Meanwhile, at Bardo, Madi might cave in to Shepherd’s demands and agree to get her memories scanned. Although Shepherd might assure her that doing so would save her friends, we all know how good Bill Cadogan is at keeping his promise.

On the other hand, there is also a chance that we might come across another death. At this point, is it even surprising that we can lose some of the major characters, whom we have all come to love? Episode 14 ends with Murphy and Emori getting trapped in the rubble of the collapsed ceiling. While Emori might wail with pain upon being gravely wounded, we can be sure that Murphy might do everything in his capacity to save her. After all this time, it would be a shame if the creators decide to kill off Murphy, one of the most well-written and executed characters in the show. However, after Bellamy’s death, we can’t be sure of anything. It’s best to keep our fingers crossed as we slide into the finale.