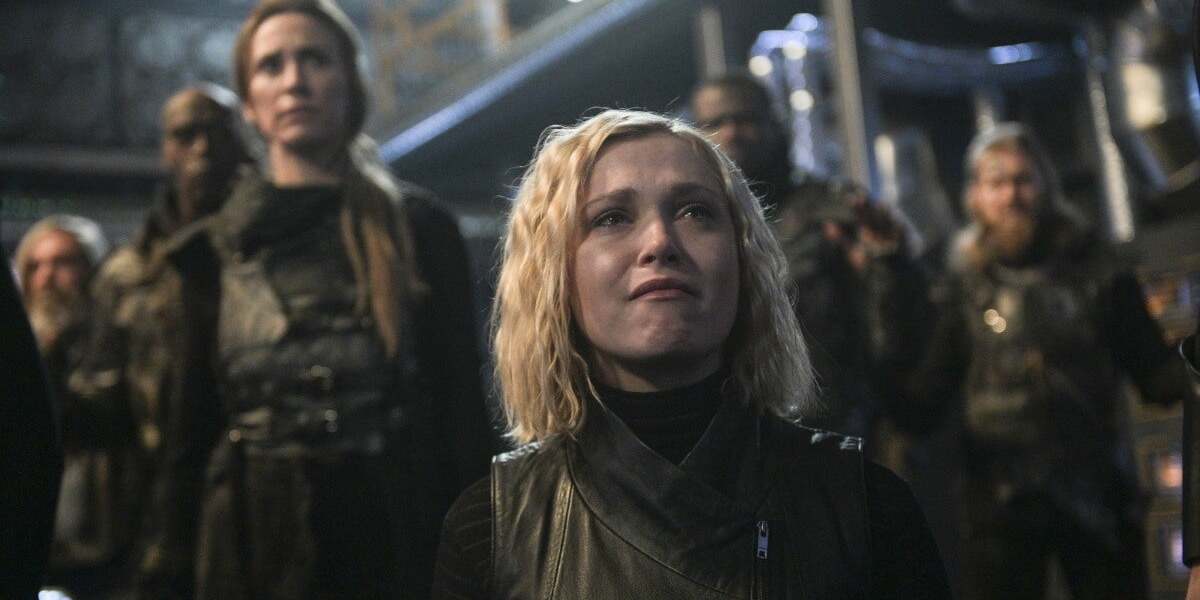 And just like that, we have reached the finale of ‘The 100.’ The post-apocalyptic science fiction drama has been entertaining the audiences since its inception on March 19, 2014. But the creators believe that like all good things, this too must end. In the penultimate episode, Murphy comes out fine from the rubble, but he finds out that Emori has been impaled by a metal rod and requires urgent medical assistance. Raven and Jackson come to Emori’s rescue only to realize that her condition is fragile because of a deadly thigh wound. Jackson tries to cauterize the wound, while Raven distracts Emori from the pain by reminding her of the good times they’ve spent together.

When they find the Anomaly stone, Emori becomes unconscious, and Jackson, Murphy, and Raven rush to Bardo to save her. Elsewhere, Clarke and Octavia reach Bardo with help from Levitt, who undergoes a change of heart after witnessing Cadogan’s torture of Madi’s consciousness in the M-Cap room. Clarke is devastated upon seeing her daughter in a vegetative state. Realizing that she may never regain control over her bodily functions, Clarke reluctantly decides to put her daughter to sleep forever. Octavia requests Clarke to let her do it. Just before Octavia could pull the trigger, Levitt informs them that Cadogan has successfully retrieved the code from Madi. Curious to know what can happen in the series finale? We have got you covered!

Where to Watch The 100 Season 7 Finale Online?

You can watch ‘The 100’ season 7 episode 16 by tuning in to your TV screens on Wednesday at the above-mentioned time slot. Needless to say, you will require a cable subscription. Shortly after its TV premiere, the finale episode will also be available on The CW website and The CW app.

Previous seasons of ‘The 100’ are currently streaming on Netflix US. In several countries, fans can watch new, weekly episodes on the streamer. However, US viewers will be able to binge season 7 after it finishes airing on The CW. You can also live-stream The CW with an active subscription to Hulu + Live TV, Fubo TV, and AT&T TV NOW. Finally, you can rent already released episodes on Amazon as well.

The series finale might tie up all the loose ends and answer all the burning questions. In the previous episode, Levitt stops Octavia just when she is about to pull the trigger to put Madi out of her misery. This means Madi’s fate hasn’t been sealed yet. However, considering Madi’s condition, it will take a miracle for her to get back on her feet. In case you remember, Jackson is a neurosurgeon. If he manages to reach there on time, Jackson might be able to save Madi. Since it is the beginning of the end, Clarke and the team might have to pull out all stops to prevent Cadogan from fulfilling his evil goal.

Honestly speaking, if the creators decide to kill Clarke’s little girl off, it will prove disrespectful to the deaths of Bellamy and Gabriel. Clarke and all her friends might gear up for the last war, and along the way, we can expect them to make tough decisions for the sake of humanity. Along with betrayals, the episode might also feature several deaths and emotional interactions between the beloved characters. Also, the finale promo gives us a glimpse of the Ark. Does that mean this has all been a dream? Or does transcendence has something to do with the Ark? Well, we will have to wait for a week to find out. So, get ready with a box of tissues and a glass of wine, for this will be a wild ride. Check out the promo!