Where To Stream The Addams Family? 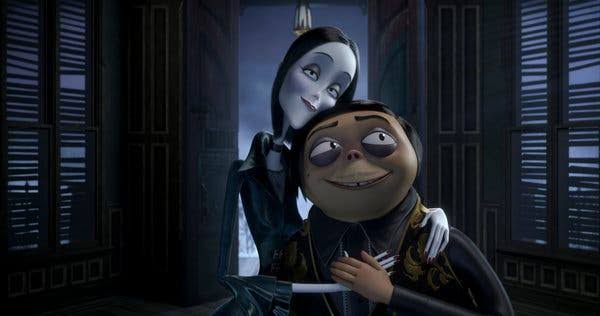 The kookiest, spookiest and most adorable family is back in ‘The Addams Family’, the 2019 animated horror comedy that is based on Charles Addams’ comics of the same name. The Addams family has appeared in shows and movies over the years, and people have come to love this macabre family that seems to eschew all things colorful, instead, embracing a wilfully gloomy and Gothic lifestyle.

Although different from any family that we have ever met in real life, the Addams family has taught us a lot about love, and how to live with each other under one roof. The members of the family always champion being unique in one’s own way and how to embrace and live with being different. Moreover, the Addams family always teaches us the best of family values as they embark on various adventures that are delightfully different from normal family adventures. The new movie offers more of the same about the family that we have come to love.

However, ‘The Addams Family’ has faced some criticisms in the most recent iteration for the lighter tone that goes against the darker source material. That being said, it is the perfect inclusion for the Halloween season and you must be wondering about where you can stream ‘The Addams Family’. We are here to tell you that but first, let us walk you through the plot of the movie.

What is The Addams Family About?

‘The Addams Family’ starts with the titular family being chased out of their old home by an angry mob who do not approve of the family’s weird ways. Morticia and Gomez Addams decide to move to New Jersey and set up a life there since not many people want to live there. Along with Thing, they find the perfect home in an abandoned haunted asylum on top of a hill. They meet Lurch there, an escaped mental patient. Obviously, the strange family immediately recruits him as a butler.

The plot moves forward by 13 years and we see the Addams family living out a life of isolation in their gloomy surroundings. Gomez tries to prepare his son Pugsley for Mazurka, the upcoming rite of passage that he must undertake just like every other member of the Addams clan. Morticia, meanwhile, struggles to keep Wednesday from wanting to explore and experience the outside world after a balloon and confetti appear on the Addams’ property.

Meanwhile, we see Margaux Needler, a reality television host planning to build the perfect community that she calls the ‘Assimilation’. When she encounters the Addams family, she realizes that they will not change their ways and fit in with her vision. Thus, the course of action is to kick them out of the town. However, Wednesday meets and becomes friends with Parker, Needler’s neglected daughter. Wednesday thus convinces Morticia to let her attend junior high school. At the same time, we see that Pugsley is trying really hard to deal with the tough expectations and complex traditions of the rite to passage. Despite Gomez and Uncle Fester helping, the boy seems to be out of his depth.

At school, Wednesday and Parker become closer friends when the former defends the latter against a bully. The two begin to rub off on each other and while Parker begins to make more Gothic choices, Wednesday becomes more colorful, much to the horror of their respective mothers. Wednesday falls out with Morticia and runs away to live with Parker, which Pugsley inadvertently tells his mother.

At Parker’s the two discover a room where Needler monitors the people of the town through hidden cameras she installed in every house she designed. When the woman finds out her secret has been discovered, she locks the kids in the attic. Spreading false information through social media, Needler is successful in rallying a mob who decides to attack the Addams household during Pugsley’s ceremony. Pugsley fails the ceremony miserably but his father assures him that he is still part of the Addams family.

This is when the mob arrives, attacking with boulders, and trapping the family inside the mansion. Using his love for fireworks and explosives, Pugsley valiantly defends his family, destroying the mob’s catapult. Wednesday and Parker also manage to escape and join in, getting the rest of the family to safety. Needler tries to take control of the situation again but Wednesday reveals her secret about spying on others. However, she says that everyone is weird in their own way and should be allowed to live. The townspeople realize their mistake and help the Addams family to rebuild their mansion. Needler is also reformed and we see her teaming up with Fester to sell homes to other relatives of the Addams family, who now live in peace alongside the other people of the town.

Is The Addams Family on Netflix?

Netflix is one of the most preferred streaming platforms that usually has something for everyone. While ‘The Addams Family’ is not on the platform, you can check out dysfunctional family dynamics in ‘The Umbrella Academy‘, which is about a family of superheroes who try to navigate through their personal lives.

Is The Addams Family on Hulu?

Hulu is always trying to stay ahead of the curve with smart additions to their library. The platform tries to ensure that various tastes are catered to. While ‘The Addams Family’ is not on the platform, you can check out ‘Boo 2! A Madea Halloween‘ which introduces us to another delightful family but also includes spooky elements.

Is The Addams Family on Amazon Prime?

Amazon Prime has firmly set itself as the closest competitor to Netflix with its expansive library meant to cater to a large and diverse audience. While ‘The Addams Family’ movie is not on the platform, you can check out the 1964 show titled ‘The Addams Family‘, which brings back the titular family in the spotlight and accompanies them on their many adventures.

Where Can I Stream The Addams Family Online?

Unfortunately, ‘The Addams Family’ is not available elsewhere on the internet for streaming right now, and you have to wait for sometime before it arrives.

Is The Addams Family Out on DVD and BluRay?

‘The Addams Family’ is not out on DVD and BluRay yet, but will be out by December 2019 as the schedule indicates.

Can I Stream The Addams Family Online For Free?

Sorry freeloaders, but you cannot stream ‘The Addams Family’ online for free at this moment. The movie is still running in theaters, however, so you can check it out there. We would like to urge our readers to pay for the art they consume.