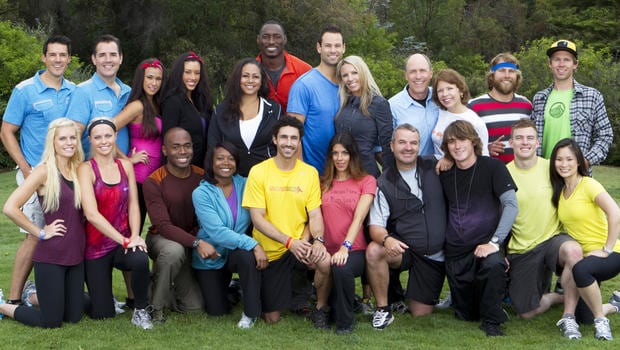 ‘The Amazing Race’ is an American reality competition television show that revolves around racing. The series is created by Elise Doganieri and Bertram van Munster. It is presented by Phil Keoghan. Jerry Bruckheimer, who is involved in projects like ‘CSI: Miami‘ and ‘Cold Case’ and has produced films like ‘Top Gun‘, ‘Black Hawk Down‘, and the ‘Pirates of the Caribbean‘ franchise, is one of the co-executive producers of this show. With so many talented people involved, it is unsurprising that since the Primetime Emmy Award for Outstanding Reality-Competition Program was conceived in 2003, this show has managed to win it 10 out of 15 times. The show airs on CBS and first premiered on September 5, 2001.

The Amazing Race Cast: Who is in it?

There are 11 teams of two people each, it can be siblings, friends, relatives, neighbors, colleagues and even divorced couples. It brings out the teamwork and the spirit in them, putting together their brawns and brains to emerge as the winners, completing the race as they compete with the other couples. The contestants for ‘The Amazing Race’ keeps changing each season. Since fan sites keep a vigilant note of the activities of this show, the likely list of participants for the upcoming season include DeAngelo Williams and Gary Barnidge, who are friends and former NFL players; Cody Buell and Nathan Worthington who are noodlers and friends; Maddison and Riley McKibbin, who are brothers as well as professional beach volleyball players.

There are two teams of sisters this time, including Victoria and Michelle Newland, and Haley and Kaylynn Williams. James Wallington and Will Jardell, ‘The Backpacking Boyfriends’ who have their own YouTube channel, are also going to be participating. Other likely contestants are LaVonne Idlette & Kellie Wells, Olympic hurdlers, and friends, siblings Aparna and Eswar Dhinakaran, a father-son duo, that is, Frank and Jerry Eaves, and Leo Brown and Alana Folsom, a couple who are dating. There is supposed to be another team, but there has been no word on it yet. Watch the upcoming season to find out for sure if these are the contestants who are going to appear.

The Amazing Race Plot: What is it about?

To familiarize you with the show’s structure, it involves racing around the world. However, the race is divided into 12 legs and each leg has the teams deducing clues, or navigating themselves in foreign areas, and interacting with the locals. The contestants also have to perform both mental and physical challenges while they vie for various transportation options, be it via airplane, boat, taxi, or other options. They have to do all this on a limited budget that is provided for the show. At the end of each leg, teams get progressively eliminated and the first team to reach the end of the final leg is given a grand prize of a million dollars for the grueling challenges that they have to go through.

The teams have to travel to the most fantastic places in the world, in a format that resembles a race. The victorious team can walk away with a million dollars. With so much money at stake, every contestant brings their best game and there are a series of clues that have to be followed. Failing to follow them results in penalties that are imposed at certain times of the competition. The clues are kept in Route Marker boxes and are varied in nature, but you can mostly expect them to be cryptic. Obviously, the show edits down the time it takes for contestants to figure out and act upon the clues, and the version we see is a shortened one presented in chronological order.

In the upcoming season too, the show will stick to its long tried and tested formula that has resulted in success over the years. Notably, this time, the locations that we will get to see are Trinidad and Tobago, Brazil, Columbia, Paraguay, Germany, France, Kazakhstan, India, The Philippines, and Cambodia. We will also get to see USA since the race is supposed to start in Los Angeles and end in New Orleans. This marks the first time the franchise shows Trinidad and Tobago to the viewers. Get ready for some more adventure in this upcoming season which promises to be a nail biter.

The Amazing Race Season 32 Release Date: When will it premiere?

‘The Amazing Race’ season 31 premiered on April 17, 2019. As far as the next season is concerned, we have good news for the fans. The show has already been renewed for another season by CBS. Even though no release date was announced, our best guess is that ‘The Amazing Race’ season 32 will release sometime in April 2020. However, do stay tuned for an official update on the release date.

While we wait for season 32, you can check out this clip below to refresh your memories about the show. If you have not seen the series and happen to enjoy a competitive element that is physically and mentally challenging, then this is the show for you.