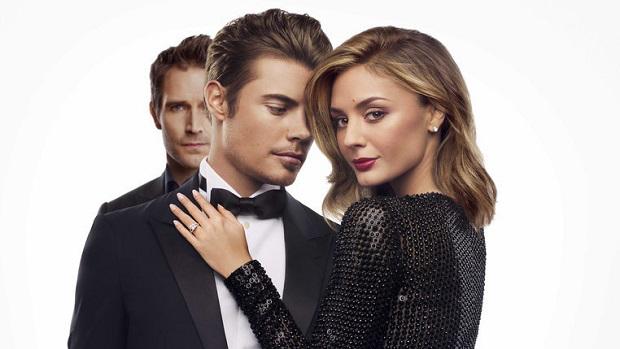 ‘The Arrangement’ is an American drama series produced by Peter Lhotka and created by Jonathan Abrahams. The series airs on E!, and first premiered on March 5, 2017.

The show centers around a young actress named Megan Morrison who gives an audition in a Hollywood film to play the lead role. In this process, she meets the leader of the Institute of the Higher Mind named Terence Anderson. He places an offer in front of her that he will give her the title of ‘arrangement’ if she gets into a contract to marry Kyle West. He also makes an offer of 10 million dollars to her. Megan enters into a relationship with Kyle West. They deeply fall for each other and things get messier when their past tries to threaten them.

Being forced into a relationship is never nice, things should happen naturally. Unfortunately for the people in this show, things are arranged for them. Anyhow, things get even messier when the two actually fall for each other. There is nothing worse for a perfectly logical contract than the inclusion of emotions into the deal and read on to find out how the show portrays this.

The Arrangement Cast: Who is in it?

The main cast of the series includes Christine Evangelista as Megan Morrison West, an unknown actress who is plucked after an audition and offered a contract to marry one of the biggest stars in Hollywood. Josh Henderson appears as Kyle West, the said star and also one of the hottest actors in Hollywood supposedly. He is also the face of IHM or the Institute of the Higher Mind. Notably, Henderson is known for his roles in ‘Dallas’ and ‘Desperate Housewives‘. Lexa Doig appears as DeAnn Anderson, a successful Hollywood producer, a high ranking member of the IHM and Terence’s wife. Michael Vartan plays Terence Anderson, Kyle’s producing partner and more importantly the leader of the IHM. Carra Patterson appears as Shaun, Megan’s best friend who is a lawyer who later gets involved with the IHM.

The Arrangement Plot: What is it about?

While the plot of ‘The Arrangement’ is simply a negotiation among some rich and powerful people in Hollywood, regarding the love life of a big star, it has an element of understated horror to it. The doe-eyed aspiring actress who is caught in a powerful web of romance, deceit, and struggle, finds herself in situations that are akin to popular horror tropes, be it a dark street or the woods at night. It is almost as though the show tries to put across the message that this is a fractured fairytale with our female protagonist playing the part of the helpless victim.

We are next introduced to Kyle, the pretty boy of Hollywood who hangs around with a lot of weird friends. It appears as though his spiritual guides are trying to set him up with this doe-eyed protagonist after he goes through a breakup. While marriage might be transactional in a lot of cultural and subcultural settings, the main plot of the series itself is structured on the basis of what-ifs, that is, what would Kyle and Megan say to each other, whether Megan would agree to marry Kyle after just spending one day with him, and how would the marriage work, since it is essentially a fiscal contract with a lot of interested parties involved.

However, things get complicated when Megan and Kyle genuinely begin to like each other, and Terence of the IHM, who controls Kyle’s personal and professional life, feels threatened. This is where the fairytale starts to disintegrate, but all the while, the viewers are treated to tasteful silhouettes of Megan making love, and Kyle making romantic gestures.

There is something to be said for the fairytale format where each time Megan tries to assert any dominance, like about the hemline of her clothes, she is simply dazzled into compliance with, perhaps, a diamond necklace. The show does not critique this as it really asks us which one of us would not take all this money, glamour, and fairytale life, even if we did have to sacrifice a bit of independence in the process. The Hollywood Reporter has gone so far as to suggest that this relationship is actually a chronicling of sorts of the relationship between Katie Holmes and Tom Cruise and might be influenced by Scientology, although the show does not name names.

Overall, the show produces a fairytale-like scenario of an arrangement between a star and an unknown girl, and some parts of it might even come across as titillating. However, it is quick to attack this fairy tale and rip it to shreds, showing the darkness lying beyond this apparent multi-layered love story where the powers and influences of Hollywood begin to converge. Hopefully, if there is an upcoming season, we will get to see more of Megan and Kyle’s story and whether they can make it out of the shadow of IHM once and for all.

The Arrangement Season 3 Release Date: When will it premiere?

‘The Arrangement’ Season 2 premiered on March 11, 2018. However, on May 29, 2018, E! decided to cancel the show. A spokesperson for the network said, “Over two seasons, E!’s scripted series ‘The Arrangement’ has taken viewers inside the world of an A-list movie star filled with secrets, scandal, and romance. While we have decided not to move forward with the series, we are incredibly grateful to the cast and our production partners.”

Though, fans should not lose all their hopes. There’s still a possibility that some other network picks up the show. If that happens, we will update you about the Arrangement’ Season 3.

You can check out the trailer for ‘The Arrangement’ Season 2 below. If you have not seen the series, then be sure to see it in order to understand how a lot of romance among stars of Hollywood takes place.