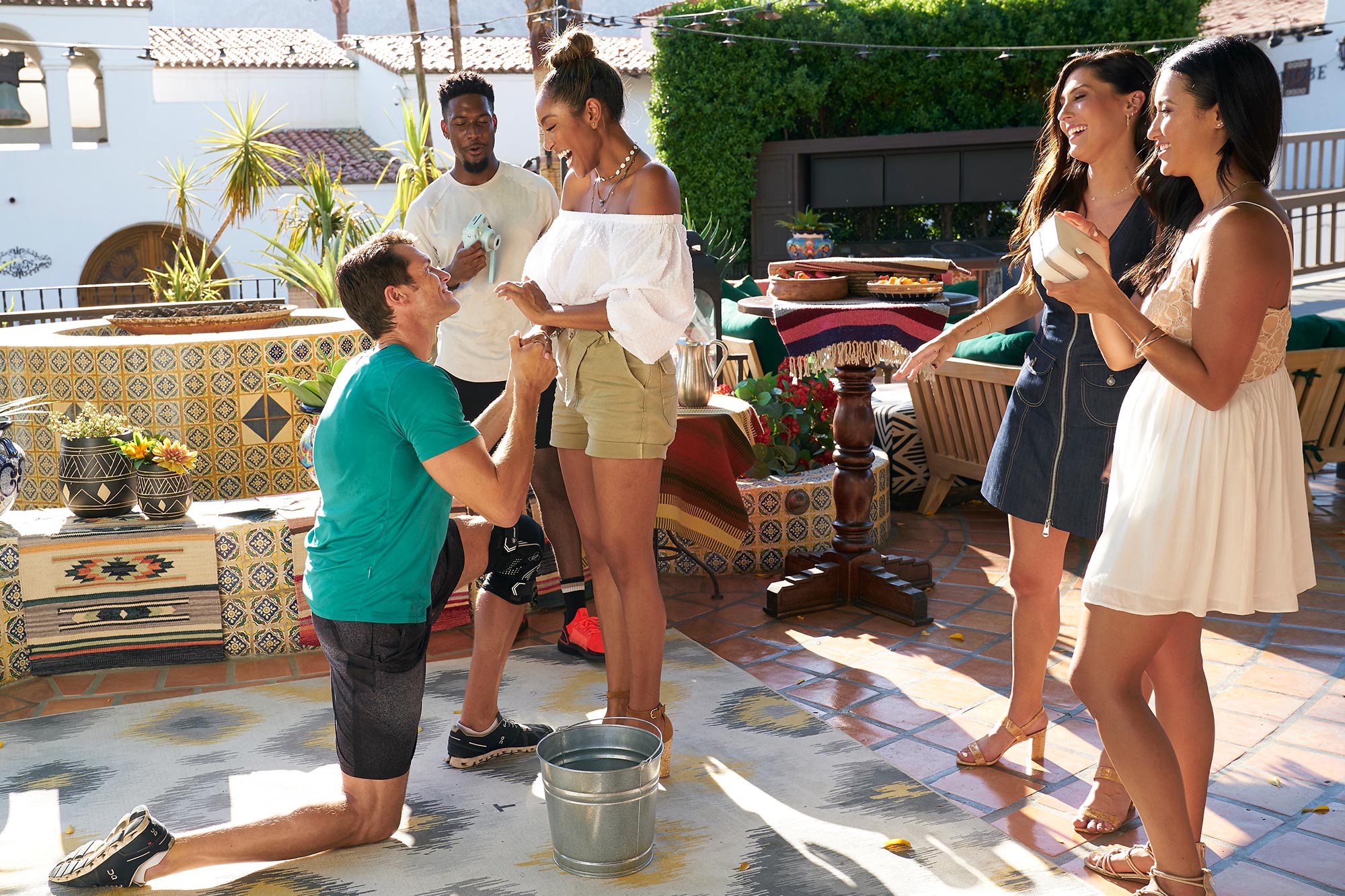 THE BACHELORETTE - “1607” – Seven men compete for the only one-on-one date by writing and performing a love song for Tayshia. Who will hit the right notes that speak to the Bachelorette’s heart? The winner of the musical competition opens up during an emotional conversation with Tayshia, and they may have more in common than they both realize. Former Bachelorette Becca Kufrin and Sydney Lotuaco from season 23 of “The Bachelor” visit Tayshia, helping her plan an outrageous game of Truth or Dare for six of the men. Ben and Ed separately decide to steal some extra time with the Bachelorette before the cocktail party to assess where they stand with her, leading to a hilarious outcome. But all hell breaks loose as Tayshia discovers what some men have been saying about her right before the rose ceremony on “The Bachelorette,” TUESDAY, NOV. 24 (8:00-10:01 p.m. EST), on ABC. (ABC/Craig Sjodin) BENNETT, DEMAR, TAYSHIA ADAMS, BECCA KUFRIN, SYDNEY LOTUACO

The 16th iteration of ‘The Bachelorette’ aired its 10th episode this Monday. Yes, the show has shifted from its original weekly schedule of dropping one episode on Tuesdays. However, episode 10 happens to be a special episode called ‘The Men Tell All’. Nine of the guys meet up to converse about some of the major incidents within ‘The Bachelorette’ villa. Of course, as expected, we also have a fair amount of drama when one of the guys is put on the hot seat! Want some more highlights? Check out our recap section at the end. But before that, here’s a quick rundown of the next episode.

Where to Watch The Bachelorette Season 16 Episode 11 Online?

You can watch ‘The Bachelorette’ season 16 episode 11 by tuning to ABC at the above-mentioned time. You can also catch the show on ABC’s official website and the ABC app. If you don’t have a cable subscription, you can watch the show on Hulu (the next day), DirecTV, YouTube TV, Philo TV, and Sling TV. You can also purchase the episodes on Amazon Prime. Previous seasons of ‘The Bachelorette’ is available to watch on HBO Max.

Before heading to the spoilers, let us outline the major highlights of ‘The Men Tell All’ that happens to be the 10th episode, which landed this Monday on December 14, 2020. Filmed at the Nemacolin Resort, the Tell All has nine guys:: Bennett, Noah, Riley, Demar, Ed, Yosef, Blake, Kenny, and Jason. Yosef is placed in the hot seat and confronted about the way he had behaved with Clare. However, he refuses to apologize.

Now, in the 11th episode, Tayshia’s first one-on-one date is with Blake Moynes. They head out to meet a crystal guru to have their crystals and chakras read. However, their connection does not even continue to the night. Tayshia sends him home after not giving him a rose at the ceremony. After Blake is eliminated, Tayshia meets up with the rest of the men. She is in tears and is upset. She wants to talk to Riley and she sends him home as well.

The guys remaining for the rose ceremony are Bennett, Zac, Brendan, Noah, Ivan, and Ben. While Ben is already safe with a rose from the previous one-on-one date, Tayshia gives roses to Ivan, Brendan, and Zac at the rose ceremony. Noah and Bennett are eliminated. Following this, we have the hometown dates. Since Brendan’s parents do not show up, he self-eliminates himself. Another guy who is sent back home is Ben. The final three men competing for Tayshia’s heart are Ivan, Zac, and Brendan.