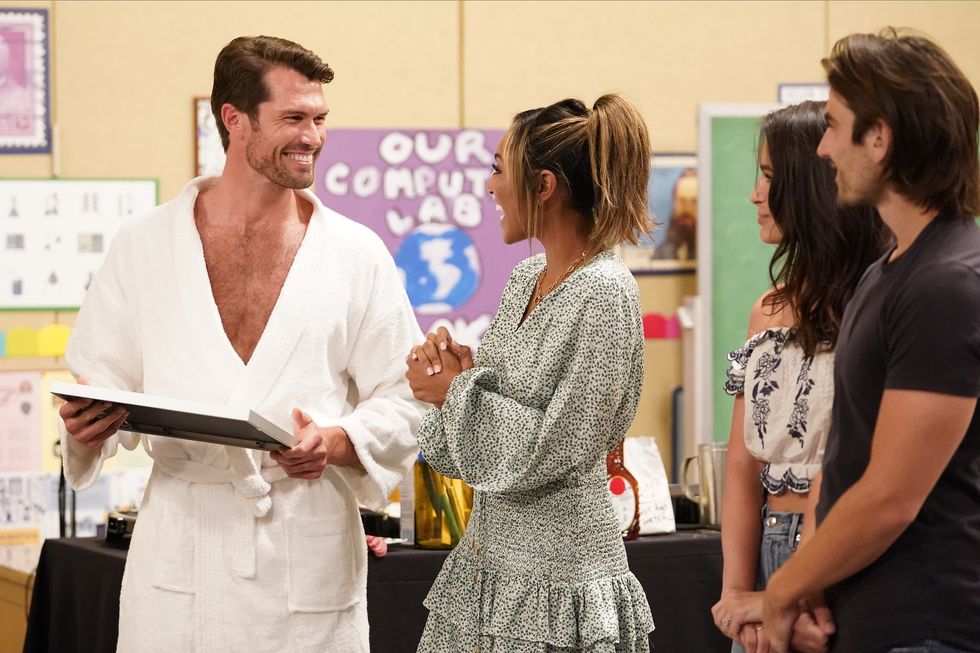 In the sixth episode of ‘The Bachelorette’, Ashley Iaconetti and Jared Haibon plan some fun competitions to test the prowess of Tayshia’s potential suitors. And eight of the guys prepare to partake in a wrestling match under the guidance of WWE and UFC fighters Amy Dumas and Tatiana Suarez. Want some more highlights? Check out our recap section at the end. But before that, here’s a quick rundown of the next episode.

Where to Watch The Bachelorette Season 16 Episode 7 Online?

You can watch ‘The Bachelorette’ season 16 episode 7 by tuning to ABC at the above-mentioned time. You can also catch the show on ABC’s official website and the ABC app. If you don’t have a cable subscription, you can watch the show on Hulu (the next day), DirecTV, YouTube TV, Philo TV, and Sling TV. You can also purchase the episodes on Amazon Prime. Previous seasons of ‘The Bachelorette’ is available to watch on HBO Max.

In the upcoming episode, we see some of the guys ganging up and talking shit about Noah while not bringing up his mustache. We meet a couple of more Bachelor alums and Ben gets another chance to have a real conversation with Tayshia.

The episode kicks off with Ashley Iaconetti and Jared Haibon hosting a series of contests. First, there is a math test, followed by a tug of war that has two guys being attached to the end of a bungee cord. The third task is all about Tayshia. She is on her bed and the men need to get her breakfast while adding in their signature twist. When Bennett enters donning a robe and getting under the covers, Tayshia remarks: “Bennett’s bougie and I’m bougie, so I appreciate it.” The winner? Undoubtedly, Bennett. Ed loses and he is branded as the ‘man child’.

During the night, the guys divide into two groups — the drama dudes (Chasen, Bennett, and Ed) and the potential suitors (Ivan and Bennett). Ed claims before Tayshia that Chasen is here only to gain more Insta followers. When Tayshis confronts Chasen, he defends himself. Chasen asks Ed to stop interfering. The group date rose goes to Ivan. In the rose ceremony, Chasen tells that he does not wish to create any drama and refers to himself as Wolverine.

Tayshia has some heart-to-heart chats with Ben and Zac and after the ceremony, the guys saying goodbye are Jay, Peter, and Montel. The following day, we have another group date, which has a wrestling match. The game is hosted by Chris Harrison and ‘Bachelorette’ alum Wells Adams. Chasen wins and becomes the champion while his opponent Noah is given an invitation to the cocktail party. That same night, Tayshia suggests that Noah should shave his mustache. She also has a great time with Brendan. Noah allows Tayshia to shave his mustache. Noah gets the group date rose.