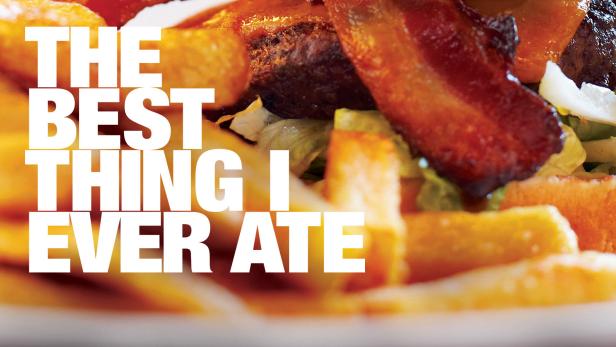 Culinary shows have been all the jazz since time immemorial (by which we really just mean the late 50’s). It has been the single most reliable staple modes of localized variety channels to engage its audience in its budding days. This is hardly a surprise, given how intrinsically men are drawn to the pleasures of the taste bud – i.e. food is a large anchor of cultural memory and tradition, and the universal application of palatable food has made it one of the earliest bastion of multiculturalism (and consequently today’s globalism).

But when we bang the drums and give three cheers to the genre, the usual image that comes to mind is that of the time-tested formula — a simulation of a chef’s kitchen on TV. Needless to say, the advent of reality TV changed the logistics of how TV works forever, and cooking shows were affected to. Enter culinary reality TV and a sleuth of game shows that dominated the last two decades.

‘The Best Thing I Ever Ate’ is a television series for people who are passionate about food and discovering places that serve them just right. It originally aired as a one time special back in late 2008. It was then turned into a recurring program by Food Network from June 22, 2009, after a preview on June 20. It spanned six seasons on the network after which it was canceled. This was, however, not the ultimatum for the show: it made a comeback with a rebooted version, after six years of absence, on the Cooking Channel. The tenth season of the show was well-received on the network. That’s why it was renewed for another season. Here’s everything we know about ‘The Best Thing I Ever Ate’ season 11.

The Best Thing I Ever Ate Cast: Who’s in it?

‘The Best Thing I Ever Ate’ has a star-studded cast in the literal sense. As we mentioned, every episode of the show features one famous chef or cooking-show host who will share their experiences about their favourite dishes related to the episode’s theme. Throughout the years, the show has been hosted by numerous star chefs and TV personalities, including but not limited to: Ted Allen (Chopped); Sunny Anderson (Cooking For Real); Mario Batali (Iron Chef); Brian Boitano (What Would Brian Boitano Make?); Alton Brown from Good Eats; Frank Bruni, a restaurant critic who formerly worked for The New York Times; Anne Burrell (Sous chef on Iron Chef America, host of Secrets of a Restaurant Chef); Scott Conant (24 Hour Restaurant Battle), and Melissa d’Arabian, among others.

The Best Thing I Ever Ate Plot: What is it about?

In today’s TV, fortunately, there have been a number of spins of the formula and enough genre-blending to bring new spice to cooking as seen on TV. ‘The Best Thing I Ever Ate’ is a show that banks on something that has existed regardless of reality TV: celebrity culture. We have had a number of Gordon Ramsays in recent decades, and the show attempts to bring in celebrity chefs and cooking show hosts with Twitter following in the five-digit thousands to a show about their favourite dishes.

The show continues with a similar format of different central themes for every episode with a panel of various celebrity chefs for each. We have all wondered at some point where the famous celebrity chefs shell out their money to eat; which restaurant lives up to their expectations of a perfect meal? The chefs dish out the hottest names in their favourite genre of food and explain just why they love it as much as they do.

For season 11, a lot seems to be on the plate. The chefs and foodies are made to strand on a desert island with nothing but an appetite; there they’re share the one dish they simply can’t live without. In the next episode, the focus is on food trucks, where Jeff Mauro gets happy about an angry lobster sandwich from the Happy Lobster Truck. In a special thanksgiving episode, chefs and food experts share their picks for a Thanksgiving to remember.

The Best Thing I Ever Ate Season 11 Release Date: When will it premiere?

‘The Best Thing I Ever Ate’ Season 10 premiered on February 25, 2019, where chefs Geoffrey Zakarian, Jonathon Sawyer, and Duff Goldman take you right through the gates of heaven towards dishes that will leave you weak in the knees. The season is another saucy, savoury, succulent journey towards food nirvana.

Cooking Channel was quick to renew the show for another season. After all, it seems the audiences still love to know what’s the best thing they can eat. ‘The Best Thing I Ever Ate’ Season 11 is all set to release on October 28, 2019.

The Best Thing I Ever Ate Trailer:

We do not have an official trailer for ‘The Best Thing I Ever Ate’ Season 11. However, you can enjoy this clip here to know more about this foodie ride.