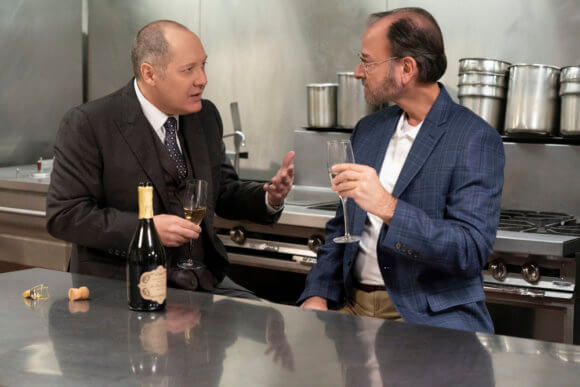 ‘The Blacklist’ Season 7 is heading to an end, albeit earlier than the show makers had imagined. Accordingly, an alternate finale awaits us, which will bring the current season to a conclusion. For now, we have an episode that is crammed with action. We see Katarina Rostova’s return, the ramifications of Red’s illness, Dembe’s near betrayal of Red, and a Blacklister, in the most recent episode. Naturally, you might be curious to know what goes down. We have got you covered and will also give you spoilers about the upcoming finale besides telling you when and where to watch it.

The upcoming episode’s title brings to mind the men who were responsible for assisting in Katarina’s ‘death.’ The Task Force investigates an accountant, working for lucrative criminals, to get to the brutish thugs who are tasked with protecting him. Meanwhile, Liz makes an enormous decision. Does this involve choosing sides between Red and Katarina? Or, is Liz merely going to pass along critical information to Red? The season finale could go in any direction, but the promo promises that we won’t see the curveball coming. Check it out below.

Dembe’s imam is kidnapped, which spurs everyone into action. Red tells the team that a prisoner named Arturo Ruel is behind the deed since his fingerprints were found there. When Keen and Ressler go to talk to Ruel, he understands he’s being set up and wants to open up to the Feds. However, before a second meeting is arranged, the warden orchestrates Ruel’s assassination within the prison.

Meanwhile, Katarina ensures that Dembe goes to meet her alone, where he has to choose between his loyalties to Red and the imam. It is a tough call for Red’s right-hand man, but he seems ready to crack. Luckily, Red carries out his investigations and finds out that the warden is involved in shady dealings. He monetizes the cruelty of the prisoners, and takes care of their families, in exchange.

Since the warden had a hand in the kidnapping of Dembe’s imam, he assists Red in the nick of time. As Red shows up, Katarina gets away, and the concierge of crime has to face the truth that Dembe was about to sell him out. With his mysterious ailment looming, Red convinces Liz to inherit all his assets but is concerned that her path is undeniably dark, hereon. Will Red and Katarina have an epic-off in the finale? Who will Liz remain loyal to? Stay tuned to find out in the nailbiting conclusion to Season 7.