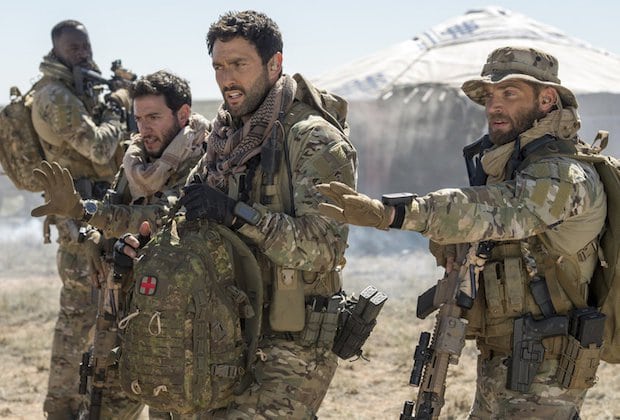 ‘The Brave’ is an American military drama series that airs on NBC. The show first premiered on September 25, 2017. Never short on action, always high on drama, ‘The Brave’ strikes the right chord by giving the viewers an insight on what the heroes of America, the men in uniform, goes through when they work for Defense Intelligence Agency, which is like the CIA’s Special Operations Group. The show has been created by Dean Georgaris.

Shows of this format has its set of pros and cons. The advantage is that military drama series are never short on action or drama, and these two are enough to draw fans to them. Thus the show has a pretty solid fan base. However, the downside is that there are several other shows like this including ‘Six‘, ‘SEAL Team‘, and many more. With the market saturated, the content has to be really outstanding to be viewed favorably by critics. Unfortunately, the critics were not too pleased with the content of this series and expressed as much.

The Brave Cast: Who is in it?

The main cast of ‘The Brave’ includes Anne Heche, who leads the pack as Deputy Director of the Defense Intelligence Agency, Patricia Campbell. In an interview, she admitted that when she first read the script for the series The Brave, she was taken aback. “I read the first couple of pages and went, ‘Wait, what?’ We can have an agency on the ground in Washington, DC communicating 5000 miles away from our troops, telling them who to shoot and what the scope of danger is?” she recalls. “That’s when I knew I was in.”

If there is an upcoming season, one would expect most of the main cast members to return. After all, they are instrumental to the smooth running of the team, and every member is valuable in this regard. However, we could also see some new characters entering the mix as new team members, which would definitely make the missions more interesting, or we could see some new villains popping up that would require the immediate attention of this team.

Read More in TV Preview: The American | The Last Post

The Brave Plot: What is it about?

‘The Brave’ has nothing out of the ordinary regarding the plot, which revolves around the endless sacrifices that military professionals have to make both personally and for the sake of serving the country. With the most sophisticated surveillance technology, the deputy director of the Defense Intelligence Agency, Patricia Campbell, played by Anne Heche and her valiant team, along with Captain Adam Dalton, played by Mike Vogel, who is a former Delta Force operator has to find an American doctor who was kidnapped. They also have to keep undertaking missions at great personal risks, in order to save the lives of numerous innocent people all over the world. Moreover, most of these missions are behind enemy lines, so there is always the risk of causing an international incident if things are not executed to a degree of exacting perfection.

The story is usually told from two perspectives, first, we get to know the importance of the mission and what is at stake at the time the assignment is given. The next part of the show is more intense if not as informative, as we follow this team of elite operatives as they try and save the world, all in a day’s work.

Hopefully, in the upcoming season, if there is one, the show will decide to head in a different direction. Personally, I feel, the series could be more interesting, if it had an overarching connection across the episodes, and decided to make the arc clearer to the audience by gradually revealing information. Not only would this make the show more gripping, but would make the narrative full of twists, instead of the formulaic mission oriented narration that we have been seeing. That aside, we must give credit where it is due, and the action sequences are well executed, and it is evident that a lot of hard work and effort has gone into the production of the show. The cast members have also done a stellar job portraying their roles and the dangers of the kind of jobs that they have to do.

The Brave Season 2 Release Date: When will it premiere?

‘The Brave’ Season 1 premiered on September 25, 2017. Due to declining viewership, on May 11, 2018, NBC decided to cancel the show. Notably, the network also pulled the plug on ‘Taken‘ around the same time, so perhaps, it was a step in the right direction to cancel shows that the market was already saturated with. Of course, there were plenty of campaigns from fans asking for renewal. There’s still a possibility that some other network picks up the show. If that happens, we will update you about ‘The Brave’ Season 2 release date.

While we wait for any positive news on ‘The Brave’ Season 2, check out the season 1 trailer to refresh your memories. If you haven’t seen the show yet, head over to NBC to catch all the episodes of the previous season.