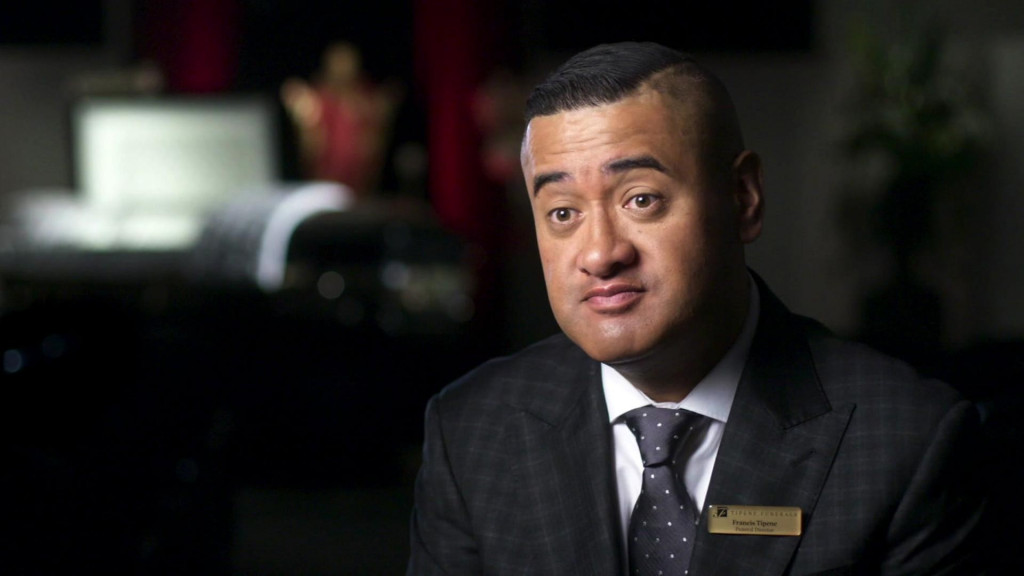 There are quite a few reality shows out there that are profession-based. Shows like ‘Pawn Stars‘ have enjoyed mainstream fame and have become more prominent, because if which they have collectively formed their own niche in the reality TV industry today. There is much more to it now than car-flipping and real estate showdown – it has expanded to cover all walks of life and many professions that fly under the radar otherwise.

Take, for example, the task of the undertakers. They are the exact topic of ‘The Casketeers’. However, instead of a patronizing quasi-documentary that caters to stereotypes, the series that airs on Netflix is rather a celebration of an area of life that is rarely ever glossed upon in the entirety of reality TV: death. The six-part show, which first aired on December 21, 2018, covers the professional life and enterprise of a Maori couple who are funeral directors. The show is a brainchild of Annabelle Lee-Harris, the very same creator behind shows about the way of the Maori – such as ‘The Hui’ (2016) and ‘Native Affairs’ (2007). Notably, the show is from New Zealand, obviously, since it explores Maori culture as well, and airs on TVNZ. The show first premiered there on January 13, 2018.

The Casketeers Cast: Who is in it?

Although there are many prominent figures among the cast in particular episodes, the show mostly highlights and centers around Francis Tipene and Kaiora Tipene, spouses who together direct the Tipene Funeral Home in Auckland, NZ. In the true spirit of reality TV, neither Francis nor Kaiora are actors or TV personalities by any stretch, although they are people persons, owing to their line of business. Having no mainstream TV personality ties does not bog the show down either, as Francis and Kaiora are charismatic as hosts. The show also dispenses with any third-party narrator for the most part, so it can be said that the main cast consists of Mr. and Mrs. Tipene, and since they are the heart of the show itself, we can be certain that they would be front and center stage again if there is going to be another season.

The Casketeers Plot: What is it about?

On a surface level, the show explores the day-to-day dealings and ordeals of Tipene Funerals, an elaborate funeral home, and service based in the suburban Onehunga in Auckland. But this itself sets the bar high for it because rather than product-shilling and/or formulaic, generic reality TV, it actually takes a look into the undertaker’s vocation – a topic quite overlooked not only on TV but also on other forms of media at large.

That said, the show does this in a very non-prosaic and personal way – rather than just handing out a slideshow of pieces of information and confession cuts, the show actually tells a story. It was a surprise hit when it turned up on the Australian Netflix, perhaps owing much to the tale of the Tipenes themselves, who were but a young couple who went into the funeral service industry with only a rudimentary sense and clutching on to Francis’ hunch about the stability of the business. ‘A business that is always busy’, says Francis in the show, ‘Why? Because people die.’ Other than some brief insight into the funeral industry itself, the show also captures well the whole procedure that is a funeral – everything from the preparations and the cremations to the burial.

While Francis’ passion had led him to become a part of this industry, Kaiora did not join until much later, after receiving a call from her husband to help dress the cadavers. While this would definitely be a morbid proposition to some, and Kaiora was no different, couples work because they support each other most when the other needs help. This is how Kaiora touched her first dead body. Soon after, she was helping her husband out in the business, and with New Zealand’s small population, the two have become celebrities ever since Netflix picked up the show.

Anyhow, Kaiora spoke to The Guardian about how she got rid of the sense of morbidness while dressing the cadavers before the funeral. She said, “I started talking to the bodies while I was working with them, having little chats. That’s how I was able to overcome the whole morbid feeling … it passed and like Francis, this became my passion.” If you have seen ‘The Haunting of Hill House‘ and can recall Shirley Crain’s scene as she dresses a corpse in the mortuary before the funeral, you might get a better sense of how morbid it can actually be.

Anyhow, the focus of the show is not just to show the morbidness of death and how it is overcome, but rather to educate the people about modern-day death in New Zealand, with a focus on Maori grief practices like “open-caskets, sleeping with the body, and fiery send-offs on marae (tribal meeting grounds).” The producers decided to balance the darkness of death with some light matter, and thus the series also focuses on the personal lives of the Tipene family, from their pregnancies to weight loss programs and biscuit thefts. The motive of the show is to break down lingering taboos and introduce viewers to a slightly warmer and funnier side to the only certainty of life, vis a vis, death.

The Casketeers Season 3 Release Date: When will it premiere?

‘The Casketeers’ Season 2 premiered in New Zealand on January 14, 2019. The second season is going to be available for streaming on Netflix on June 21, 2019. Phil Smith, an executive with Great Southern Pictures, the production company backing the project, expressed some assurance that the show would return for another season though they happen to be in the process of securing funding for it. He said, “if you can do death and comedy together and it works, then globally you’re onto a winner. Just look at the success of shows like ‘Six Feet Under‘.”

While no precise release date was announced, we believe ‘The Casketeers’ Season 3 will premiere in Dec 2019 in NZ and sometime in the spring or summer of 2020 in the US. We will update this section as soon as we learn more.

While we wait for season 3, check out this clip below. If you have not seen the show, you should watch it for the unique combination of personal humor and dignified respect for the death that this series brings.