The Coroner: I Speak for the Dead Season 4: Premiere Date, Cast, Recap, Update 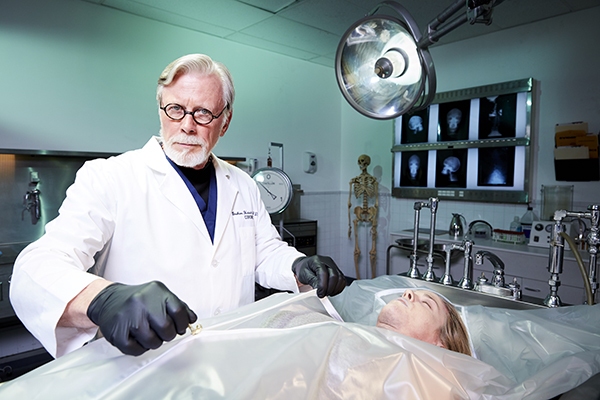 It needs no stressing that true crime is one of the largest if not the most prominent vein of the docu-reality to date – and such has been the general notion producers have harboured for decades. In any case, true crime itself is a broad term that may address a diverse array of shows. It covers, for example, the legendary and long-running as Cops (which has been running for longer than Simpsons) which ran for almost four decades on Fox, which only recently dropped the show. Cops is considered legendary because it actually came the closest to simulating the ‘reality TV’ spirit, incorporating the grit and sense of immediacy vital to give the impression that everything on the camera are events unfolding naturally. The other tried-and-tested formula often resorted to is a close approximation of elements found in detective fiction and buddy-cop flicks. The latter may only add some superficial pivot of reeling in the audience’s emotional investment in characters, but the former works for our innate desire to see puzzles get solved.

While the large swathe of crime-related documentary shows will take the general approach of a detective’s perspective on his feet, ‘The Coroner’ finds a different way to approach macabre homicides – by finding clues on the victim’s body itself, a basic forensic exercise: the most important thing about a homicide investigation that very few people will point out to you before the subject is directly evoked.

It is a crime mystery based American reality television series, filmed in Los Angeles and California that is available to stream on Amazon Prime Video. Brandin Stennis from the series has won the Young Artist Award (2018) in the category of Best Performance in a TV Series – Supporting Young Actor. The series features a coroner’s journey conducting body investigations for providing justice as well as answers to the families concerned.

The Coroner: I Speak for the Dead Cast: Who’s in it?

Jonathan Thomson as Graham Hetrick, the coroner is otherwise known for Wrigley and King (2011), Serena and the Ratts (2012), and Independents’ Day (2016). Jason Vande Brake serves as the narrator of the series. Michelle Haro from Criminal Minds (2005), Shameless (2011), and Into the Dark (2018) appears as Michelle.

The Coroner: I Speak for the Dead Plot: What is it about?

We cannot deny the fact that crime is a part of our society and it happens very often all over the world. Some crimes get solved, and some go unresolved, in which, half of them are related to death. In the investigation of every crime against the human body, along with the police investigators, coroners also play a major role in providing clues for resolving the crime, by examining just the dead bodies of the victims. ‘The Coroner: I Speak for the Dead’ is one such story of a coroner by the name Graham Hetrick, who has an experience of 25 years in the field, and handles nearly 700 cases of suspicious deaths every year. While detectives are busy searching for clues among the living, Graham is utilizing his expertise in uncovering the secrets of the dead.

Each hourlong episode of ‘The Coroner: I Speak for the Dead’ covers a stylized re-enactment of a compelling homicide case taken from Graham Hetrick’s file. As viewers are taken through a series of twists and turns, Graham peels off the layers of the investigation one by one, to let us understand how the murder had occurred and who is to blame for it. Hetrick has been described as a natural story-teller and a bonafide solver of the mystery, whose aim is to bring peace to grieving families who are in search of answers for the death of their loved ones and to ensure that justice is served to each of those families.

“Graham is not only among the most respected experts and gifted investigators in his field but one whose distinctive voice and storytelling flair provide a needed emotional warmth in the cold world of forensics,” said Henry Schleiff, Group President of Investigation Discovery

Graham Hetrick grew up in a funeral home. So for him, being around the dead bodies was very common and a normal part of his life. He became a coroner in Dauphin County, Pennsylvania. According to Graham Hetrick, the dead bodies can also speak. Where everyone else sees a body on the autopsy table, he sees a collection of decisions. The body speaks about the struggle it went through while fighting the killer. Graham is very dedicated to his work. While we hear ‘Everybody has a story to tell’, Hetrick says, ‘Every-Body has a story to tell’, and he just has to listen to it.

Graham said in an interview, “I want the show to portray the role of a coroner and medical-legal investigator. I also want to look deeper into the causes of homicide and the tragic results for those left behind. We, as a society, must start having a real, thoughtful and open conversation about violence.”

After getting positive reviews, the series got renewed for season two which premiered exactly one year. The second season consisted of ten episodes.

The Coroner: I Speak for the Dead Season 4 Release Date: When will it premiere?

Since there has been no concrete news so far to confirm whether a new season is filming or even whether it has been positively renewed, naturally, the news is sparse about the prospective release dates if there is to be the fourth season. If we were to make a wild guess, we have to rely on the release schedule pattern in the previous seasons. All three seasons in the past were slated to release on the July-September panels, and so in accordance with this, we might see a new season by Q3 2019.

It would also not be unrealistic to expect another season by September even after accounting for no renewal at the present, because the show has taken somewhere along four months to film in the past, and a shorter season might take even less. As of now, season four of ‘The Coroner: I Speak for the Dead’ has not been renewed yet. Any updates regarding the air date will be posted here.

The Coroner: I Speak for the Dead Trailer

Watch the official trailer of the show available below.