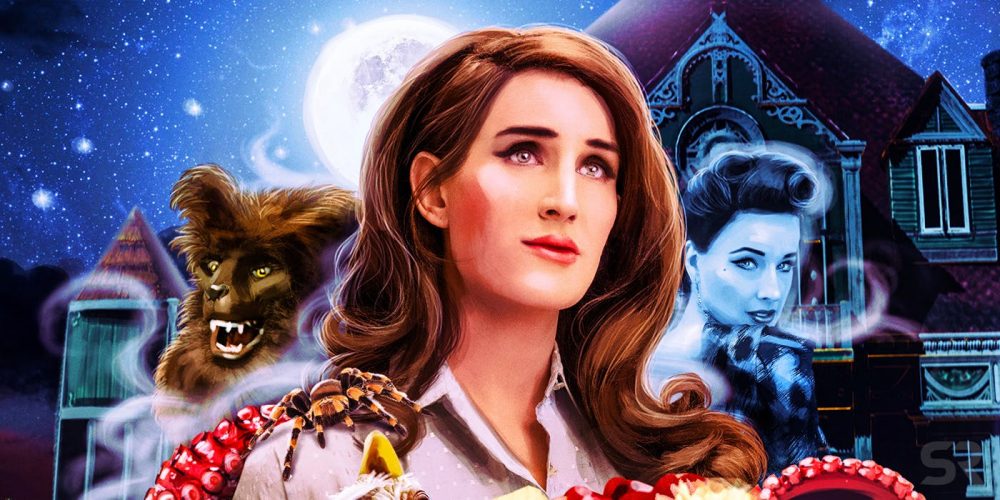 The Curious Creations of Christine McConnell is an American sitcom which is created and directed by Christine McConnell, who is also the star of the show. It first premiered on Netflix on October 12, 2018. There are six, half-hour episodes in the first season which were produced by Netflix, Wilshire studios and The Henson Alternative, a part of The Jim Henson Company. The show is an unusual combination of a DIY show and scripted reality and centres around Christine McConnell who lives in a monster mansion, by which we mean a mansion full of monsters and ghosts. She loves to make and bake morbid looking confections.

The Curious Creations of Christine McConnell Cast: Who’s in it?

The star of the show is Christine McConnell who is a quirky baker and a spectacular artist. She feeds and cares for the peculiar creatures that she lives with. She is a kind and warm person who has always stood out from the others but lets the creatures plot against the troubling neighbours and each other sometimes.

Another important character in the show is Rose, played by Colleen Smith. Rose is a racoon who was formerly roadkill but was then reanimated by Christine.

Rankle is played Michael Oosterom. He is a mummy of an ancient Egyptian cat. Christine stumbled upon him in an antique store, and read the spell on his burial plate which brought him back to life.

Edgar, body-performed by Mick Ignis and face-performed and voiced by Drew Massey, is a werewolf that was left on Christine’s doorstep for her to find, who she took in and now lives with her.

Bernard, played by Tim Lagasse, is a monster that lives in the basement. Rose has confided in him from time to time for advice and guidance. The character of Milly, a creature that lives in the refrigerator. The only visible part of Milly is her tentacles that are seen when assisting Christine by passing her items.

Vivienne, played by Dita Von Teese, is the ghost of a woman who has been shot by her supposed lover. She lives in the mirror and is Christine’s fashion advisor.

Cousin Evie is played by Colleen Smith. She is Christine’s insane cousin who is a widow. She discovers in her parents’ will that everything was left to Christine and eventually plots a murderous plan to kill her so that she can inherit everything.

Norman, played by Adam Mayfield, is Christine’s lover who she met at the graveyard while visiting her grandmother. He is a serial killer and visits Christine for dinner dates regularly.

Mr Ketcham, played by Steven Porter, is Christine’s grumpy neighbour. He does not like Christine and often complains about the creatures she adores and lives with.

The Curious Creations of Christine McConnell Plot: What is it about?

The show is about Christine McConnell who has always been a unique child. She has always stood out for being different than the others and having different taste. Christine lives in a mansion filled with puppet monsters who are her friends, and she takes care of them. She enjoys making mouthwatering and frightening creations. She also has a lover who is a serial killer, and the sitcom revolves around an unusual lifestyle of living in a haunted mansion and caring for the monsters, being in love with a serial killer, annoying neighbours and a cousin who wants to kill you so they can inherit the family money. Some of Christine’s famous creations are gingerbread haunted houses, caramel spiders and bones made of pretzel sticks, peanut butter, and white chocolate.

When asked Christine about her take on food she said, “I think the fascination with food and art is sort of cyclical, I think in the ’70s people got really fun with food, and then it waned, and [now] I think we’re in the middle of a big movement back to that and I sort of latched onto it because I’m a huge fanatic of deserts and things like that and I turned it into this really fun medium.” When speaking about her curious creations on the show she explains, “The projects in Curious Creations are playful for people to do at home. If there’s a disaster, it’s usually funny, as opposed to more intense art where you’re sculpting something out of stone, and it’s not quite as attainable for everybody.” The show is an unlikely combination of a food program and a goth show, but somehow they manage to make it work.

The Curious Creations of Christine McConnell Season 2 Release Date: When will it premiere?

The Curious Creations of Christine McConnell Season 1 premiered on October 12, 2018. Since then, there hasn’t been any word on the next season of the show. However the star of the show, McConnell, has expressed the desire to make another season and that there are a lot of ideas she wants to try out.  So, for now, we can only wait for any kind of confirmation from Netflix. If show does get renewed, The Curious Creations of Christine McConnell Season 2 can release sometime in October, 2019.

Here’s the trailer of first Season of the show to refresh your memories.