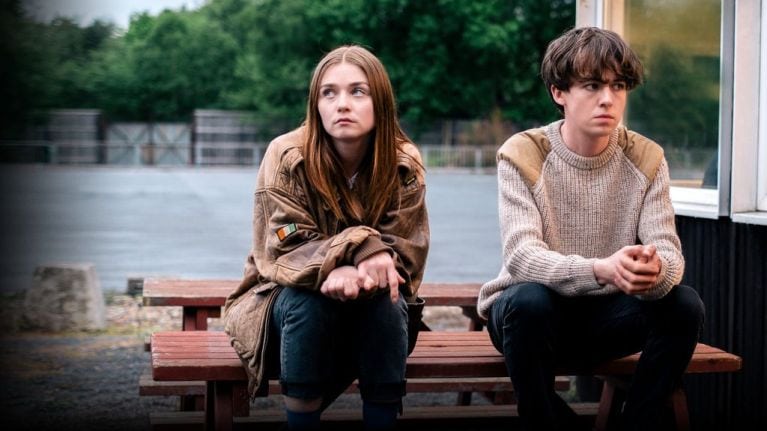 ‘The End of the F***ing World’ is a British dark comedy-drama television show, which initially aired on Channel 4 in the UK, before airing the rest on All 4. However, in the US, and internationally, the show is available for streaming on Netflix. It first premiered in the UK on October 24, 2017, and premiered internationally on January 5, 2018. The series is based on the graphic novels by Charles Forsman. This story is based on two 17-year-old teenagers, James and Alyssa, who embark on a journey across England to find Alyssa’s long-lost father. The novels were first set to be made into a movie but were later commissioned for a television series. This show is for teenagers as well as adults alike as is said by showrunner Jonathan Entwistle, “It’s an angsty teen story, but with an adult execution”.

Charlie Covell has written the series for television, and it has been directed by Jonathan Entwistle and Lucy Tcherniak. Clerkenwell Films and Dominic Buchanan Productions are the companies backing the project, while Kate Ogborn is the producer. Ed Macdonald, Murray Ferguson, Andy Baker, Petra Fried, Dominic Buchanan, and Jonathan Entwistle are on board as the executive producers. The series has been true to its word and attracted fans across age groups. Critics too have lauded the nihilistic tones of the show, and how misanthropy mingles with humor effortlessly. Notably, the strong performance from the young protagonists has also earned well-deserved praise.

The End of the F***ing World Plot: What is it about?

The plot of ‘The End of the F***ing World’ revolves around James, who believes he is a psychopath. Although he kills animals as a hobby, he soon gets bored with it and wants to kill a human being. He settles on Alyssa, a mouthy and rebellious, who has her own issues. Alyssa hates her mundane life and sets out to find her father. She asks James to come along, and he agrees, in order to find the right opportunity to kill her. However, in the course of their adventures, they come across several mishaps, and as they face them together, the two begin to develop a relationship. Starting with a heavy dosage of topics including murder, psychopathy, and self-mutilation, the show firmly sets down the tone. The characters are going to be unlikable.

James and Alyssa also go out of their ways to enforce this view, but to the more discerning viewer, psychopathy does not require validation from another, which is not the case of James eventually getting accustomed to having Alyssa around. The show, much like the characters, uses bold-faced nihilism to hide a tender core, which might even be called romantic. The characters are well fleshed out, however, and we see James and Alyssa both deal with their issues of abandonment and finding comfort in each other. Speaking from the narrative perspective of things, the episodes are short, and the action feels like whirlwind. The show moves seamlessly forward, going from cliffhanger to cliffhanger, knowing that it has the audience right where it wants.

In a show dealing with a psychopath and rebel, one must talk about the emotional side. Unlike Bonnie and Clyde, Alyssa and James are understated, perhaps because they are kids, but also because the writing intends them to be so. Emotions are handled with meticulous care on the show so that it never becomes mawkish. Perpetually cool, the series keeps bringing up some sentimental moments, only to undercut them with a gag. A word must be spared for James’ voiceover, where, having an adolescent voice allows for a lot of naive but satisfying observations. James keeps his voice laconic as he delivers one understatement after another when the show moves between being entertainingly caustic and having moments of moving bathos. It is unsurprising that the show has cutting intensity.

The characters reflect their personalities, not just in how they talk to each other, but how they talk to the audience. James is always clinical and detached, while Alyssa is introspective, rebellious, and taut. They resent the world, which is typical of teenagers and can be extremely violent when the situation demands. However, the truth is that the world has been uncaring towards them and has heaped a more insidious form of violence in the form of neglect, trauma, and even attempted rape.

The show revels in paradoxes as the leads are reprehensible but sympathetic, and although it is highly unlikely for a self-proclaimed psychopath and a rebel refusing all roots, to fall in love, they do exactly that. Their love story is a sweet one, but one marked by occasional violence. Cinema lovers might find some similarities between this couple and two couples in different Tarantino movies. Pumpkin and Honey Bunny from ‘Pulp Fiction‘ springs to mind, as James and Alyssa hit American styled diners on their way, and since violence is always bubbling under the surface for the two, one wonders if a scene like Quentin’s film could transpire. However, what is even more striking is the reference to Tarantino’s ‘True Romance’. I mention this, not just in terms of committing acts of violence for the one you love, or the eventual face-off with the police, but because of the very direct sartorial reference in James’ red floral shirt that we see during the series.

While the show might be referential, it would be wrong to call it glib. It takes some stylistic ideas, but it has plenty of ideas of its own, and as a show that has come out in a postmodern and uncaring world, it focuses on what is most important, that is interpersonal relationships.

Without giving anything away, let us say that the show ends on an extremely ambiguous note, but one of tenderness and defiance all at once. In the upcoming season, we expect the show to pick up from where the previous season left off. On that note, the show makers will have greater freedom this season, having exhausted the story of the original source material. Hopefully, they will take this new season to greater heights.

The End of the F***ing World Season 2 Release Date: When will it premiere?

The End of the F***ing World Trailer:

Check out ‘The End of the F***ing World’ Season 2 trailer below.