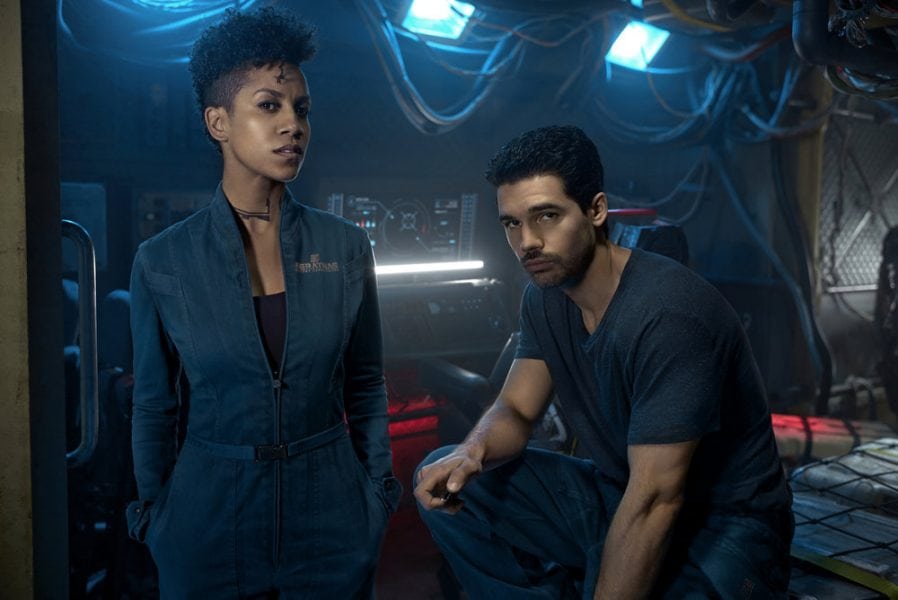 ‘The Expanse’ is an American science fiction series based on the New York Times bestselling eight-part book series of the same name by James S.A. Corey, which is actually the pen name for co-writers Daniel Abraham and Ty Franck. The show first premiered on December 14, 2015, on Syfy, where it ran for three seasons before being canceled in May 2018. It was then picked up by Amazon Prime Video later that month.

‘The Expanse’ is set in a fully colonized solar system which is on the brink of war. The three main parties that make up this narrative are Earth, Mars, and the asteroid belt. Their biggest mission is universal peace and they try everything to complete it. This peace is almost threatened when three antiheroes unwittingly find themselves at the center of a  conspiracy.

‘The Expanse’ was an instant hit and was also loved by the critics when it first premiered. The show has developed into a beautiful masterpiece over the three seasons and has been praised for character development, political narrative, and stunning visuals. Here’s everything we know about The Expanse season 4.

The Expanse Season 4 Release Date: When will it premiere?

‘The Expanse’ season 3 premiered on April 11, 2018. While the show was canceled by Syfy, Amazon Prime Video immediately picked it up, which means that Season 4 was always a part of plan. On July 20, 2019, it was announced that The Expanse season 4 will release on Dec 13, 2019. Perhaps the streaming platform is following the successful formula of ‘The Man in the High Castle‘.

The good news for the fans of the show is that ‘The Expanse’ season 4 is all set to premiere on December 13, 2019. Time to get excited.

The Expanse Cast: Who is in it?

While most of these cast members return for the upcoming season, a few new faces have also been added to the mix to make things interesting. Rosa Gilmore of ‘The Handmaid’s Tale‘, Keon Alexander of ‘Tyrant’, Jesse Salgueiro of ‘Mouthpiece’ also join the cast. Lyndi Greenwood of ‘Sleepy Hollow’ plays board as Dr. Elvi Okoye, and Burn Gorman of ‘Torchwood’ plays the role of Adolphus Murtry, the security chief.

Gilmore, who stars as Lucia Mazur, is one of the Belter refugees who has staked her claim to a new Earth-like planet on the other side of the Ring Gates. Trained as a medic, Lucia doesn’t hesitate to help friend and foe alike when disaster strikes. Alexander plays Tyant, a wily and charismatic Belter faction leader. Salgueiro portrays a cynical corporate security officer.

The Expanse Plot: What is it about?

‘The Expanse’ is set hundreds of years in the future when humanity has colonized the entire solar system. A police detective is sent to find a missing girl, and in the course of his investigation, he becomes entangled in a conspiracy that could trigger a war and disrupt the very fragile peace that exists between the planets. On earth, a UN representative tries hard to prevent a battle between Mars and Earth before stumbling on to this conspiracy and realizing that the entire situation is bigger than what they could even have imagined. The series has been praised for its overall dense storytelling and the nuanced political narratives that are especially evident in the rebellious colony of earth on the asteroid belt.

Shankar, an executive producer told EW, that the incidents in season 4 would look at what happened beyond ‘The ring’ which opened up at the end of the last season. It would be based on the source material of the fourth novel of the series, that is, ‘Cibola Burn’. He said, “Ty and Daniel often refer to the story of Ilus and Cibola Burn as kind of a classic Western in many ways. The book Cibola takes place entirely on Ilus. We are there for one complete novel. We are going to tell that story in season 4, sure, but we’re not leaving Earth and Mars and the Belt behind. They’re part of the story, and both of fans of the books and fans of the show are going to see something really interesting and new in season 4.”

What we can expect, in this case, is akin to the competition that was seen during the gold rush. Up until this point, the settlers believed that there was nothing beyond the Solar System and their resources were finite. However, the opening up of this new world means there are more land and more resources to be captured and claimed. Whatever semblance of peace remained will be thrown to the wind and it is bound to be a blood-soaked race to see who colonizes the newer territories first. Greed such as this is what destabilizes existing societies and viewers might be in for exactly that when the upcoming season airs.

Check out the trailer of ‘The Expanse’ season 4 below to get excited. While you wait for the upcoming season, catch the previous seasons here.