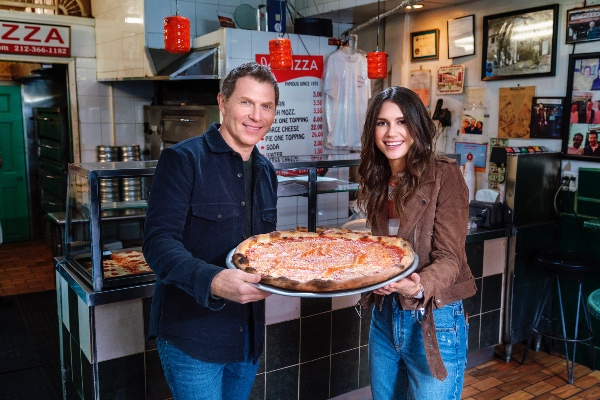 There are very few types of TV shows that can be considered evergreen. Food shows is surely one among them. They were popular in the 90s; they are popular even today. While streaming giants like Netflix have heavily invested in culinary shows (like Chef’s Table), Food Network, a channel that deals only in variety of food shows, is also constantly trying to reinvent itself and the stuff it produces. Its new show, The Flay List, is also an effort in that direction.

The Flay List is a reality TV series that first premiered on the Food Network on Thursday, April 11, 2019. It takes viewers on a culinary journey across various street food joints in New York City. Bobby Flay owned Rock Shrimp Productions are the producers of the show.

The Flay List features celebrity chef Bobby Flay as the host and his 22-year-old daughter Sophie Flay as the co-host. Bobby already runs another show on the Food Network channel, namely ‘Beat Bobby Flay’. He is one of the longest-featured personalities on the cable network and has appeared in several other popular shows as well, such as ‘Grillin’ & Chillin’’, ‘Food Network Star’, ‘Iron Chef America‘ and ‘Worst Cooks in America‘. Flay also operates a number of restaurants around the country and is the author of multiple cook books.

The father daughter duo of Bobby Flay and Sophie Flay pair up to explore the streets of New York City and discover unique, delicious, and native dishes. In fact, checking out unique foods on NYC streets has been long-time hobby of Bobby. When not in the mood to cook, Bobby loves to visit famous go-to spots in his hometown and taste their famous delicacies. Now, he is also accompanied by his daughter Sophie, who shares the same love for food but has different taste buds than her dad’s and holds her own list of must-visit food corners. In the episodes, they team up to show each other their favorite restaurants which serve six iconic dishes: fried chicken, pizza, tacos, steak, lobster rolls and burgers.

Some of the known spots featured in this show are the ever buzzing Chelsea Market (known for its tacos at Los Tacos No.1 and creamy Italian gelatos at L’Arte del Gelato.), Sweet Chick in the Lower East Side, Morgenstern’s ice cream parlor (famous for its gourmet ice creams), and Oxomoco at Greenpoint, Brooklyn. The pair also pay a visit to the Blue Ribbon, which is a restaurant that Bobby had worked in during his earlier days. Other spots shown are J.G. Melon ( a fave of Bobby for burgers), Emily (Sophie’s pick for Detroit-style pizza), Grace Street Cafe in Korea Town, and Wolfgang’s Steakhouse.

The show surely takes its viewers on a virtual, finger-licking culinary ride. Courtney White, President of Food Network, had this to say about the show “Bobby’s background as an elite chef and restaurateur, having worked in New York City restaurants since he was a teenager, coupled with Sophie’s experiences growing up around the best chefs and food in the world, offers the audience a unique, up close and personal view into Bobby and Sophie’s favorite culinary destinations that are perfect for all generations”.

The Flay List Season 2 Release Date: When will it premiere?

The Flay List season 1 premiered on Food Network on Thursday, April 11, 2019. All the six episodes are of 30 minutes each, during which Bobby and Sophie visit their favorite culinary spots in New York. While Sophie introduces her dad to her latest discoveries, Bobby brings forth his choicest, all-time picks. Combining old school flavors with new age taste, this series surely brings a unique twist into the realm of food reality shows.

As far as the next season goes, we don’t have an official announcement yet. Though considering the uniqueness of the show, we would be surprised if it doesn’t get renewed. If the show does get renewed, The Flay List season 2 can release sometime in April 2020. We will update this section as we hear more.

Food Network has not released any official trailer for the show. Head over to the official page of the network to check out the latest clips.