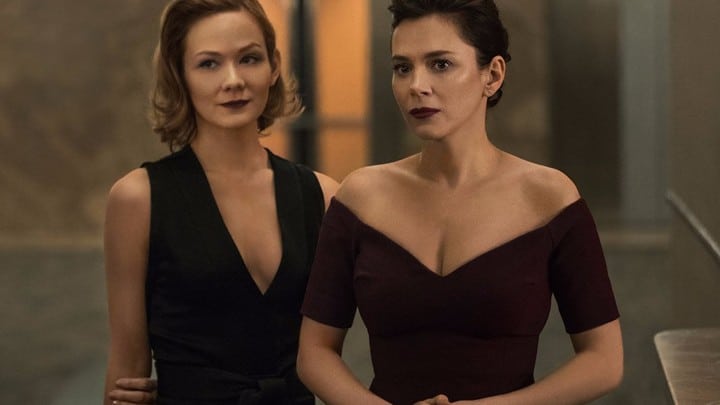 ‘The Girlfriend Experience’ is an American anthology drama television series that airs on Starz. The show first debuted on April 10, 2016. It has been written, created and directed by the talented duo, Lodge Kerrigan and Amy Seimetz. With Transactional Pictures backing the project, the series has Steven Soderbergh, Philip Fleishman, Lodge Kerrigan, Amy Seimetz, Gary Marcus, Jeff Cuban, Andrew Fierberg, and Adele Romanski as the executive producers.

Having someone of Soderbergh’s stature and talent as an executive producer not only draws more viewers but also makes sense since ‘The Girlfriend Experience’ is based on Soderbergh’s 2009 film of the same name. In the film, pornographic actress Sasha Grey played the role of the protagonist Christie, alias Chelsea. The film explored the life of this high-end Manhattan-based escort, whose business is hampered ahead of the 2008 presidential election, as she finds her clients less willing to spend time with her as they are all troubled by the financial crisis.

The series, on the other hand, is unlike most series and the seasons differ in characters, leads, and storylines. They do not share a common agenda either. Although ‘The Girlfriend Experience’ takes almost nothing from the movie except for the name, it has made its mark and earned high praise from critics. Vulture was specifically very generous in speaking about the opening season of the show, saying, “I think it’s easily one of the best shows of the year, and a major work by everyone involved…because The Girlfriend Experience is actually four or five shows rolled into one, and a big part of its specialness resides in those moments where it morphs from one thing into another.”

The sophomore season was praised by The Guardian highly, who wrote, “It’s rare to see a show filled with such mysterious complexity, stridently defying the conventions that would traditionally make a show seem initially binge-worthy.”

The Girlfriend Experience Cast: Who is in it?

What one must understand about ‘The Girlfriend Experience’ is that the seasons have nothing in common between them. The cast and stories are all different. Perhaps the only link between the two are some thematic similarities and that too, they are not overtly evident and must be unraveled by a discerning viewer.

In Season 1, the cast of the show is led by Riley Keough as Christine Reade, the protagonist, who works at a law firm and is an escort. She is joined by Paul Sparks as David Tellis and Mary Lynn  Rajskub as Erin Roberts. Their presence is also bolstered by a strong supporting cast of recurring characters.

In Season 2, the show has two parallel storylines of ‘Erica & Anna’ and ‘Bria’. The cast for the former includes Anna Friel as Erica Myles, Louisa Krause as Anna Garner, and Nargesh Rashidi as Darya Esford. The ‘Bria’ storyline has Carmen Ejogo as Bria Jones or Sarah Day, Tunde Adebimpe as Ian Olsen, Harmony Korine as Paul, and Morgana Davies as Kayla Fairchild.

In the upcoming season, the show is expected to continue in a similar fashion and have an entirely new cast of actors coming on board. It will be interesting to see how their dynamics work out and where they take the plot of ‘The Girlfriend Experience’.

The Girlfriend Experience Plot: What is it about?

The plot of ‘The Girlfriend Experience’ is completely different across the seasons and thus must be recounted separately, since there is no overt link tying the two together. While the first season majorly revolves around the girlfriend experience as its basis and covering other aspects of the show as well. The second season sidelines that and focuses more on political aspects, as well as the life of a former escort in protective custody.

In season 1, one sees a young, ambitious law student struggling with her financial state when a close friend working as an escort introduces her to her client’s friend. From here starts the protagonist, Christine Reade’s new secret life as Chelsea Rayne,  that allows her to bridge the financial gap she has for so long been struggling with, but there might be more involved than finance for her to have chosen this line of work. As season 1 ended, it left viewers at the edge waiting for season two. The writing for the show has been very tastefully done and is worth watching.

Season 2 of ‘The Girlfriend Experience’ is split into two storylines that happen simultaneously but are never meant to collide. The season’s 14 episodes covering the two tales were broadcasted as two at a time, back to back, giving insights of both the stories. The first one, titled “Erica & Anna”, focuses on politics, and the part money plays in it very intensely and takes place in Washington DC. The second, titled “Bria”, focuses on a former mistress in New Mexico, who has managed to flee from her rich, abusive, criminal client and has gained protective custody under a US Marshall. The former mistress with her thirteen-year-old stepdaughter is doing everything she can to maintain her new identity and life, but everything doesn’t always go as planned. On the other hand, Erica Myles, a financial director, along with Anna Garner, a girlfriend experience provider is plotting on blackmailing a fundraiser. The two stories can be a little tricky to keep up with as they simultaneously go on but the writing and cinematography make up for that lag.

Some of the obvious points that will be apparent to viewers of the show are how sex plays an important part. While there is admittedly a ton of it, it is never distasteful and the series avoids being labeled as pornographic. Apart from that, it does not shy away from political issues either and often shows how women have to assert themselves in a complex role of gender politics, both in their workplace, and social lives. However, what is most striking is the evident effect of capitalism on the characters of the show that is something the series borrows from the original film and handles beautifully.

Hopefully, when the upcoming season arrives it will continue its daring exploration of sexual and political issues and use the compelling character arcs to remain one of the most powerful and well-handled shows to have come out in recent times.

The Girlfriend Experience Season 3 Release Date: When will it premiere?

‘The Girlfriend Experience’ Season 2 released on November 5, 2017. The good news for the fans of the show is that on July 26, 2019, Starz announced that it has renewed the show for a third season. While no release date was announced, we expect ‘The Girlfriend Experience’ Season 3 to premiere in November, 2019. We will update this section as soon as we have the official confirmation.

While we wait for ‘The Girlfriend Experience’ Season 3, check out the season 2 trailer below.