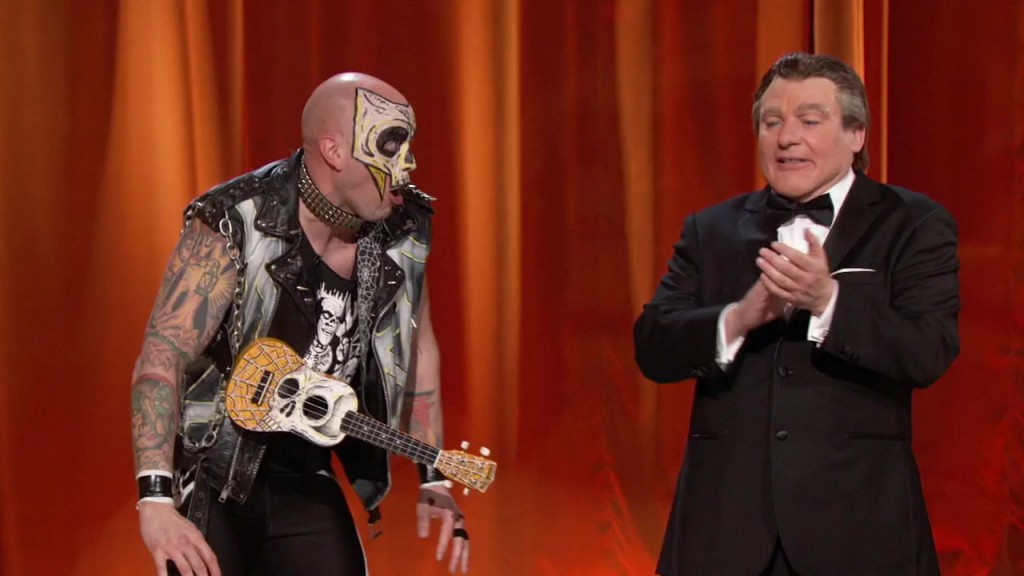 The show was originally created and produced by Chuck Barris, who also served as the host. ‘The Gong Show’ is currently executive produced by Will Arnett and hosted by Mike Myers under the guise of Tommy Maitland, a fictional character. The format of the show is well known for its absurdist humor and style, and the competition often takes a backseat compared to the outlandish nature of some of the acts that have to be performed. Each season, the winner of the show is typically handed a small cash prize.

Talent contests and guest shows are always a rave among audiences. Shows like ‘America’s Got Talent‘ or ‘The Wall‘ targets a wide range of audience and since anyone can take part in these, they feel a lot more inclusive. Moreover, there is always the issue of the prize at hand, which keeps the competitive spirit and thus interest in the show, alive. This series is no different and over the years it has become one of the beloved shows of America with an immense fan base, and it is well-liked by critics too. Read on about it.

The Gong Show Cast: Who is in it?

The cast of ‘The Gong Show’ includes the narrator and the presenter, who remain constant, while the judges might keep changing as some celebrity judges come onto the show, drawing more viewers due to their star power. Obviously, the contestants keep changing over the seasons. In the revival, Mike Myers of ‘Austin Powers‘ fame plays the role of the presenter in the form of a fictional character, Tommy Maitland. It is expected that he will return to host the upcoming season as well. Will Arnett of ‘Arrested Development’ and ‘BoJack Horseman‘ fame plays the part of the narrator in the show, and for an actor who is well known for his robust and distinct baritone, this is the perfect fit. He also appears as a judge in some of the episodes. It is likely that he too will be reprising his role in the upcoming season.

Some of the celebrity judges in the past seasons have included the likes of Megan Fox and Courteney Cox, and we have to wait and see which celebrities will be making their appearance in the upcoming season.

The Gong Show Plot: What is it about?

‘The Gong Show’ is a popular talent show ruled by a panel of celebrity judges. Unworthy performers, of which an endless stream (dis)graced the stage, were unceremoniously and gleefully `gonged’ from the competition. The show is taped in front of a live audience.

The format of the current revival remains the same. People with various types of ‘talents’ are allowed to perform in front of a panel of judges, some of whom are celebrities. The panel of three judges these amateur performers. If any performance that is put up is considered to be so bad as to be unbearable, the judge can stop it by striking a large gong. This means that the participant has to go off stage. While most have the sense of accepting the judge’s decision with sheepish good grace, there are always some firebrands, who do not take it well and leads to some good drama in the show. Of course, once the gong is struck, the hosts ask the judge in question as to what made the performance particularly bad.

There is, of course, a minimum time that the performance must go on before the gong can be struck. This leads to multiple interesting scenarios. Sometimes the performers end the act early if they sense that the gong will be struck. In this case, the host has the freedom to eliminate them. On some occasions, the judges strike the gong before the minimum stipulated time. This is then overruled by the host and the performer is allowed to continue. Of course, this is the most terrible situation because the performer now knows that their fate is sealed.

In some cases, there is ensuing drama on part of the judges, as they deliberately lift the mallet, mimicking the striking of the gong. The moments before this is built up by the live audience via laughter and handclaps, as everyone waits in delightful anticipation for someone to be ‘gonged’ out. Things are never as simple on television shows because sometimes, there will be tussles between judges as they are of varying opinions whether the gong should be struck or not. Sometimes, a judge even obstructs another from striking the fatal gong. It is all very fun, and highly entertaining to watch.

In the event that the gong is not struck, then the judges all rate the performance on a scale of 0 to 10, and the highest scorer wins obviously. In the event of a tie, the tiebreaker is usually decided by the celebrity judge. Hopefully, in the upcoming season, the format of the show is going to remain the same.

The Gong Show Season 3 Release Date: When will it premiere?

‘The Gong Show’ season 2 premiered on June 21, 2018. Although there is no news from ABC yet about the renewal of the show for another season, there is a good reason to believe that it will be greenlit. After all, the show has received positive ratings and game shows are always popular. If the show does get renewed, ‘The Gong Show’ season 3 will release sometime later in 2019 or early in 2020. However, we will keep you updated about the official release date.

While we wait for’ The Gong Show’ season 3 , you can check out the trailer for Season 2 below.