The Good Lord Bird: Everything We Know 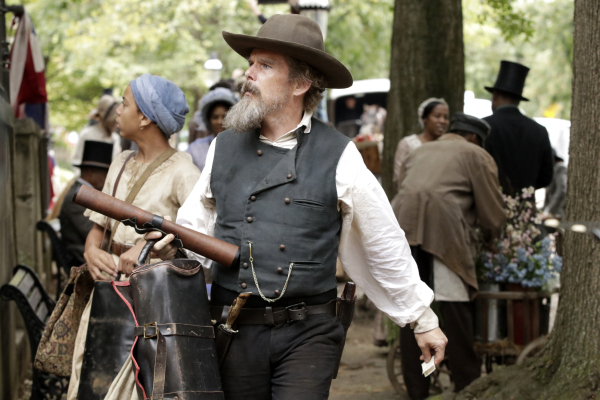 ‘The Good Lord Bird’ is an award-winning novel, penned by James McBride. Narrated in the form of a memoir by a fictional slaveboy called Henry Shackleford, it retells the story of John Brown’s abolitionist mission. Based on this very book is Showtime’s eponymous period piece that lends a dramatic and humorous insight into America’s past. Part adventure, part absurdity, and part tragedy, ‘The Good Lord Bird’ narrates how faith and ambition can entwine to transform a nation’s history. Backed by a star-studded cast and creative team, this tv masterpiece reflects American oddity at its best! For more details, you can check out our detailed preview.

‘The Good Lord Bird’ season 1 releases on October 4, 2020, on Showtime at 9 pm ET/PT. The series is created as a seven-part limited event.

The lead character of John Brown is played by Ethan Hawke. In history, Brown was a legendary figure who wanted to abolish slavery, a goal that was purely driven by his faith in God. He led the crusade with a vision, ruled by his blind fanaticism and irreverence. Brown and his soldiers executed a raid on the US Armory at Harpers Ferry, which eventually led to the American Civil War. Hawke also serves as the creator of the series alongside Mark Richard. Joining Hawke is Joshua Caleb Johnson as Henry Shackleford, a free slave, commonly known as Onion.

Onion is a fictional character, who is shown to be living in Kansas City in 1856. He has an encounter with John Brown, who mistakes him to be a girl, gives him a gown, and nicknames him Onion. Onion continues to hide his identity in the hopes of getting a better life. Daveed Diggs plays Frederick Douglass — an excellent writer, brilliant orator, popular public figure, and shrewd political strategist. When Brown and Onion take shelter in Rochester, the husband of two wives declines Brown’s offer to join the raid. Rounding up the lead cast is Wyatt Russell as First Lieutenant J. E. B. Stuart, McKinley Belcher III as Broadnax, and Rafael Casal as Cook.

‘The Good Lord Bird’ is narrated from the perspective of Onion, a slave in Kansas during the Bleeding Kansas era. The series chronicles the various adventures of Onion, with special emphasis on his fated encounter with John Brown, the 19th-century abolitionist. Onion becomes a trusted aide to Brown and a member of the visionary’s motley crew of soldiers. He eventually accompanies Brown in the 1859 raid on the Army depot at Harpers Ferry.

Historically, Brown did not achieve his goals after the raid but he did end up instigating the Civil War. Showtime gives us more insights into want can be expected from the drama. Its website says: ‘The Good Lord Bird’ is a “humorous, dramatic, and historical tapestry of Antebellum America based on the award-winning novel by author James McBride. Told from the point of view of Onion, a newly freed teenager who joins abolitionist John Brown on a holy crusade to end slavery and finds himself part of the famous 1859 raid at Harpers Ferry, the Limited Event Series is an adventure equal parts absurd and tragic, spotlighting the ever-changing racial, religious and gender roles that make up the American identity.”