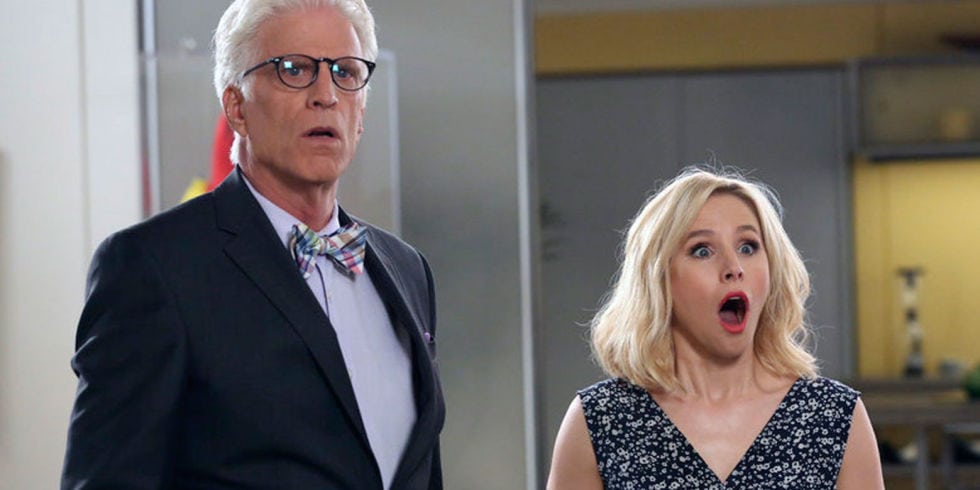 Did you ever think ethics and philosophy could be funny? No, right? Well, ‘The Good Place’ by NBC will make you re-evaluate that opinion. An American fantasy comedy television series created by Michael Schur, ‘The Good Place’ follows four people navigating (after)life in a utopia where not everything is as it seems. The show first made its way to viewers’ screens in 2016, and since then, has seen a good run.

The show has had three successful seasons so far and is in the middle of its fourth season. Over the last few seasons, the show has garnered a loyal fan base.

As far as the future of the show goes, fans should know that the show enjoys a brilliant rating and has a large viewership. Given this fact, NBC is unlikely to pull the plug on the show, and it would not be wrong to expect more seasons in future.

The Good Place Cast: Who is in it?

The show has six main characters and a host of supporting characters.

Leading the pack is Kristen Bell who stars as salesperson Eleanor Shellstrop. Ethics professor Chidi Anagonye is played by William Jackson Harper, while Jameela Jamil plays Tahani Al-Jamil, a Pakistani philanthropist, and Manny Jacinto plays Jason Mendonza, an amateur DJ.  Further, Ted Danson stars as Michael, the architect of “The Good Place”, and D’Arcy Carden plays the role of Janet, a programmed guide who is there to answer every question and fulfill every desire of the humans inhabiting “The Good Place”. These six characters have appeared on all seasons of the show that has aired thus far, and we expect all six of them to make a comeback in the next season as well.

The Good Place Plot: What is it about?

For the uninitiated, ‘The Good Place’ is a comedy that makes interesting observations about life, death, the afterlife, and everything in between.

The show starts off when Eleanor passes away and finds herself in a utopia called The Good Place (as opposed to The Bad Place), which is a highly-selective Heaven-like paradise that rewards righteous people in their afterlives. The Good Place, in turn, is created by an immortal architect called Michael, who seeks to shape this afterlife community in a way in which it can accommodate every the tastes and preferences of every inhabitant.

However, things get complicated for Eleanor when she quickly realizes that she had not led a righteous life, but had been mistakenly selected to live in this afterlife utopia. Here, she befriends deceased amateur DJ Jason, who too, has been picked mistakenly. Together, the two take lessons in ethics from Professor Chidi, while Jason’s soulmate Tahani tries to find a way in which both Jason and Eleanor can continue to keep living in The Good Place.

However, when these efforts fail, an eternal judge named Shawn rules that Eleanor and Jason must spent their afterlives in The Bad Place. Later, in the shocking finale of Season 1, we come to known that Eleanor and co. had been living in The Bad Place all along. At this point, Michael reveals to Eleanor, Jason, Chidi, and Tahani his sinister plot to keep them together for eternity, so that they end up torturing each other emotionally and psychologically. Michael also periodically erases their memories so that they cannot know the whole truth about their afterlife existence.

Season 2 picks up from this twist, and finds Michael in a fix – after repeated attempts to get Eleanor and co. to torture each other, Michael fails, thereby incurring the wrath of other demons. He then decides to team up with the humans and helps them escape. When Michael tries to lead the humans to The Good Place, the judge who allows entry deems them unfit and sends them back to Earth without any memory of the afterlife to given them a second chance to live life in a righteous manner.

Season 3 follows this arc wherein Eleanor, Jason, Chidi, and Tahani live their second lives on Earth. However, instead of picking a righteous path in life, all four start slipping back into their older, sinful patterns of behavior and ways of living, and this leads to much drama. Meanwhile, Michael realizes that no one has entered The Good Place in 521 years, and makes it his task to fix the system.

In terms of reception, the show has managed to make an extraordinary impression on critics, with Seasons 1, 2, and 3 having mind-blowing scores of 91%, 100%, and 100%, respectively, on Rotten Tomatoes. Overall, the show has an average score of 97%. Among audiences too, the show has done exceptionally well for itself, and enjoys a solid rating of 8.2/10 on IMDb, after over 52,000 votes.

Here’s the trailer of Season 4 to get you excited.