When Will The Good Place Season 4 Episode 11 Premiere? 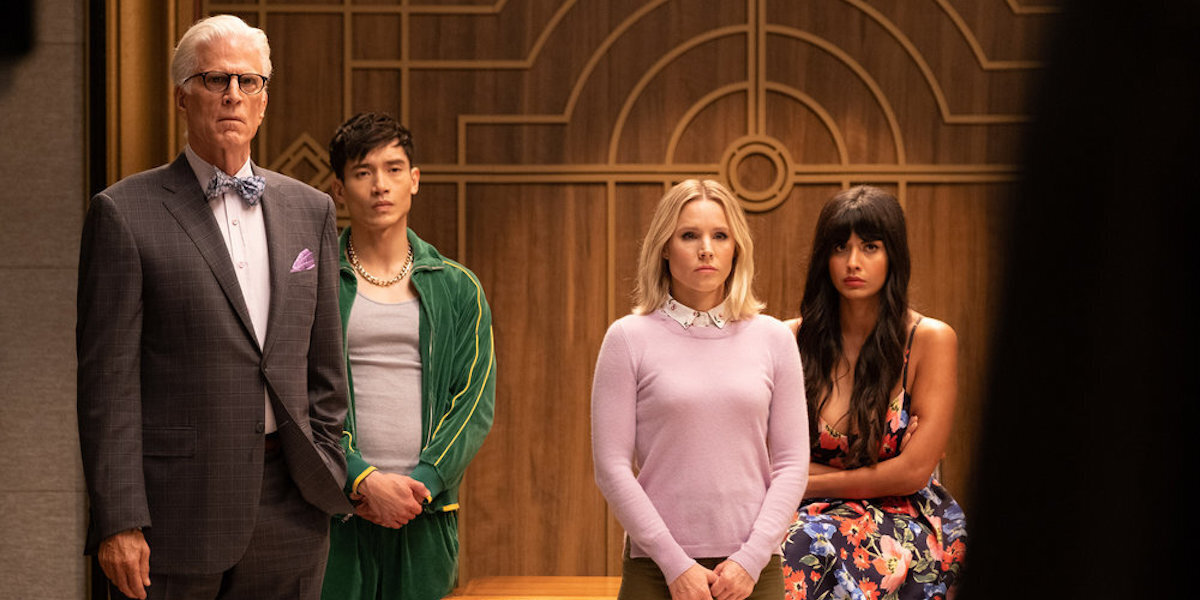 All good things come to an end. This time, it is the end of the line for Michael Schur’s fantasy comedy, ‘The Good Place.’ The fourth and final season aired on September 26, 2019, and follows Team Cockroach: Eleanor, Chidi, Tahani, Jason, Janet, and Michael, as they go ahead with their experiment in a new neighborhood, struggling to prove that there is good in everyone and therefore, each person deserves a shot at redemption.

The show went for its last mid-season break on November 21, 2019, after airing nine episodes. The mid-season finale is filled with punches so hard, you bounce to The Bad Place and come back. In ‘The Answer,’ we see Chidi reliving his past memories, right before Michael wipes them all and resets him. From his parents’ reconciliation to his girlfriend Alexandra dumping him for his indecisiveness, Chidi experiences them all only to come to the conclusion that there is no definitive answer to any problem. Interestingly, as he wakes up, Janet hands him a note that reads: “Eleanor is the answer.” Well!

No wonder, after witnessing their favorite character go through a roller coaster of emotions, fans waited with bated breath for the season’s winter comeback. Episode 10 landed on January 9, 2020, much to fans’ relief. So, want to know more about how the story will take off from the last episode’s jaw dropping ending? Read on to know the details of the upcoming episode, i.e ‘The Good Place’ season 4 episode 11.

The Good Place Season 4 Episode 11 Release Date: When Will It Premiere?

The upcoming episode has been titled ‘Mondays, Am I Right?’

In ‘The Good Place’ season 4 episode 11, we can expect Chidi and Eleanor in the Bad Place headquarters. As they figure out a way to save the world from collapsing, they have to first learn how the Bad Place grades the humans and hence they decide to visit for getting a better clarity on devising a new point system as a basis to judge humanity. Michael helps them by running some tests and Chidi, as always has Jason by his side for “expert” advice.

Where to Watch The Good Place Season 4 Episode 11 Online?

You can watch ‘The Good Place’ season 4 episode 11 on NBC at 8:30 p.m. ET. Three seasons of ‘The Good Place’ are available for streaming on Netflix, with the final season premiering on January 31, 2020.

The next option is to stream all the aired episodes on Hulu, if you don’t have a subscription, you can go for a one-month free trial. You can also purchase the latest season from Amazon, or stream them on  Fubo TV, DirectTV or watch via VOD on YouTube TV.

The gates are closing on The Good Place as Judge Gen is hellbent on erasing all of the human race and reseting the world.

As Judge Gen is constantly marbleizing Janets to find the Earth Eraser clicker, Janet tries her absolute best to stop her, even pointing out that erasing the earth would also erase Gen’s favorite character from ‘Justified’ – Timothy Olyphant. Although Gen takes a pause to think, she does snap back on and says she will erase it no matter what.

Meanwhile, Chidi tells Eleanor he loves her and together they, along with Michael stir up a plan to save humanity. Through something Judge Gen says, Michael gets an idea of transferring the people in the afterlife to The Medium Place. Shawn’s not convinced at first, but Michael comes up with something just in time to save our last original Janet from becoming a marble. But, RIP Disco Janet.

What is the plan? Well, you will have to wait to find out. Also, watch out for an amazing cameo!