The Good Place S4 E12: Everything We Know 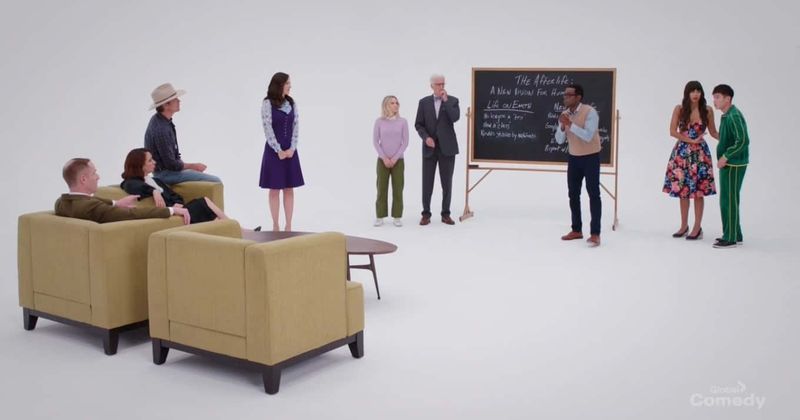 Michael Schur’s fantasy comedy, ‘The Good Place,’ is coming to an end soon and we are so not ready. The fourth season released on September 26, 2019, and revolves around The Soul Squad that comprises Michael, Eleanor, Chidi, Tahani, Jason, and Janet, as they conduct behavioral experiments in an altogether new neighborhood, striving to bring to surface, the goodness in everyone and making sure each person gets a chance at redemption.

The show returned from its mid-season break on January 9, 2020, with the 10th episode. The mid-season premiere is packed with lots of drama, action and typical light-hearted fun that we have grown to love. In ‘You’ve Changed, Man,’ we see Michael and team devising a masterplan to stop Judge Gen from erasing the earth. Shawn rejects the plan at first but passes it out of satisfaction after Michael accepts his defeat. Timothy Olyphant makes an appearance and Disco Janet is marbleized and gone forever.
After watching the over dramatic drama unfold, it is natural that fans waited with bated breath for the next episode. Episode 11 landed on January 16, 2020, allowing fans to heave a sigh of relief. So, want to know more about how the story will take off from the last episode’s jaw dropping ending? Read on to know the details of the upcoming episode, i.e. ‘The Good Place’ season 4 episode 12.

The Good Place Season 4 Episode 12 Release Date: When Will It Premiere?

In the next episode of ‘The Good Place’, we expect Eleanor Shellstrop to have another spiritual awakening, which sheds light on the fact that she can still turn things over and be a good person with a newfound positive outlook towards life.

Where to Watch The Good Place Season 4 Episode 12 Online?

You can watch ‘The Good Place’ season 4 episode 12 on NBC at 8:30 p.m. ET. Three seasons of ‘The Good Place’ are available for streaming on Netflix, with the final season premiering on January 31, 2020.

The next option is to stream all the aired episodes on Hulu, if you don’t have a subscription, you can go for a one-month free trial. You can also purchase the latest season from Amazon, or stream them on Fubo TV, DirectTV or watch via VOD on YouTube TV.

After the announcement that a new afterlife plan is going to be introduced, chaos ensues at the Bad Place headquarters and the members fume with rage, refusing to adapt because they like to torture people according to the old plan.

By calling a meeting, Shawn and Michael try to explain the whole deal, by showing them the video of Janet singing “Simply the Test” them but their decision to stand by their old system is firm, except Vicky volunteers to help. After initial reluctance, Michael agrees to have her on-board and “1.28 Jeremy Bearimy Later” we spot Vicky, successfully running a training center for both Good and Bad Place architects.

Meanwhile, Chidi and Eleanor’s relationship bumps into a roadblock as Chidi reads Eleanor’s file and feels that she way too good for him and will eventually get bored of his mundane lifestyle. Enter, Jason -the savior. An innately charming Jason puts some sense into him by pulling the same card Chidi once pulled on him. Jason assures Chidi that Eleanor loves him and that’s not going to change, come what may. Love is all that matters. Chidi then apologizes to Eleanor and everything’s fine.