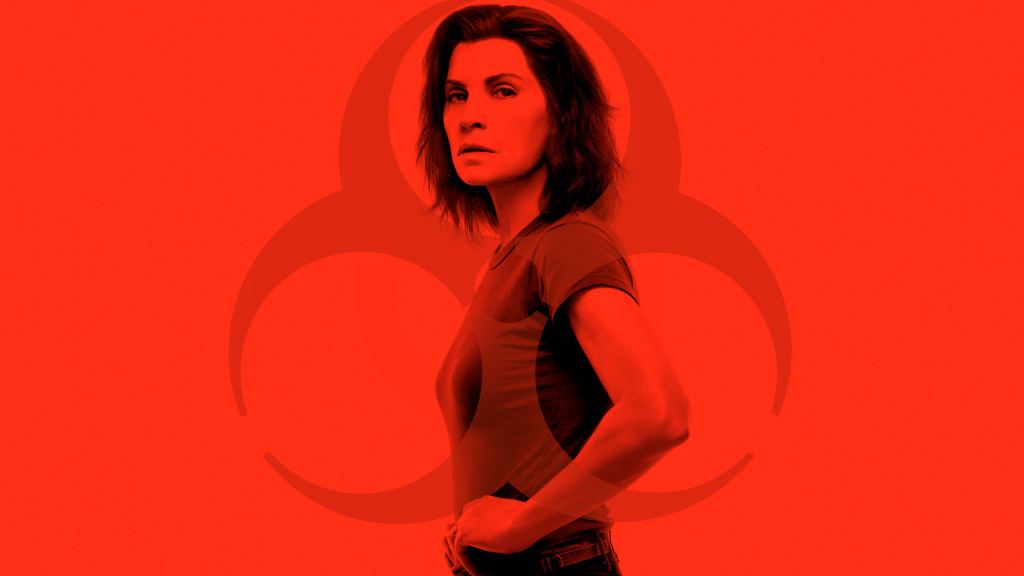 Nat Geo’s limited series, ‘The Hot Zone’ is about the gruesome reveal of genesis of the deadly Ebola virus. It’s a fictional adaptation of the true origins of this fatal microbe; but still, it is scary as hell. If you did not know already, the first strains of Ebola had originated in the dense African rain forests. It was responsible for several human deaths from Ebola Viral Disease (EVD), and caused the 2013–2015 Ebola virus epidemic in West Africa, resulting in more than 11,000 confirmed deaths.

The series takes us to 1989 when this mass killer suddenly appears out of nowhere and begins infecting primates in a scientific lab in Washington, D.C. With no known cure available, one heroic U.S. Army veterinarian, Nancy Jaax, employed with a secret military SWAT team, battles all odds and attempts to stop this threat before it engulfs the whole of humanity. ‘The Hot Zone’ is an adaptation of Richard Preston’s eponymous best-seller, released in 1994. It is directed by Michael Uppendahl and Nick Murphyand first premiered on Nat Geo on May 27, 2019.

The Hot Zone Cast: Who is in it?

‘The Hot Zone’ stars Julianna Margulies as the protagonist, Dr. Nancy Jaax. This American actress and producer is best known for her portrayal of Carol Hathaway on NBC’s ‘ER’. Her other notable performances include ‘The Mists of Avalon’, ‘The Good Wife’, and ‘Dietland‘. She is a winner of several accolades, including Primetime Emmy, Golden Globe, and Television Critics Association Awards. Accompanying Margulies in other prominent roles are Noah Emmerich as Lt. Col. Jerry Jaax, Liam Cunningham as Wade Carter, Topher Grace as Dr. Peter Jahrling, Paul James as Ben Gellis, Nick Searcy as Frank Mays, Robert Wisdom as Col. Vernon Tucker, and Robert Sean Leonard as Walter Humboldt.

The Hot Zone Plot: What is it about?

The story of ‘The Hot Zone’ begins with a terribly sick man who walks out of his house with great difficulty and books a cab for the airport. Covered with red boils and coupled with a nagging, hoarse cough, he barely makes it to his destination — Nairobi. It’s apparent from this scene that the man has exposed a lot of travelers on the flight to this deadly disease. The next shot takes us to North America, where the infection has spread to infect primates in a lab and the administration needs to trace its outbreak while also finding a solution for it to stop.

Next comes Jaax, who, with the help of a young sergeant, enters the Level 4 Biosafety containment area, in order to examine a sample. Her sole aim is to diagnose the cause of this rapidly spreading, fatal disease, and uncover a cure, something which is not within reach yet. Throughout the series, we also get glimpses of Jaax’s personal life, such as her dull marriage, made weirder with the presence of her husband in the same team. Jaax is the true embodiment of a human superhero, as she gets into conflicts with others and puts herself at risk, only for the greater good.

‘The Hot Zone’, as far as its plot is concerned, sticks true to its core theme. As viewers, we are definitely unnerved with the gruesome virus-infected patients shown on screen. Still, we admire those scientists who work tirelessly to keep us safe. Overall, it is a combination of an educative series and a scary, absorbing thriller, that shall stay with you for a long time after you finish watching it. And of course, the show also benefits from a stellar cast. As reported by The Hollywood Reporter, “Margulies’ natural chilly calm is a tremendous asset”. The article further adds, “Cunningham has a great enigmatic intensity, Grace some necessary snark, D’Arcy a nuanced weaselly pragmatism and Emmerich is always able to make the most of minimal characterization”.

The Hot Zone Season 2 Release Date: When will it premiere?

‘The Hot Zone’ season 1 premiered on Nat Geo on May 27, 2019, at 9 p.m. ET. Before its release, it had already premiered with its first two episodes at the 2019 Tribeca Film Festival. The six-part limited series airs on three consecutive nights on the channel.

Now, as far as the next season is concerned, we do not have any official update on it yet. The show’s renewal depends a lot on whether there’s a need to continue Julianna’s story. If ‘The Hot Zone’ season 2 does happen, it might premiere sometime in May, 2020. However, we shall come back with more concrete news as soon as we get more official information regarding the same.

While we wait on the season 2 news, here’s the official trailer for ‘The Hot Zone’ season 1.