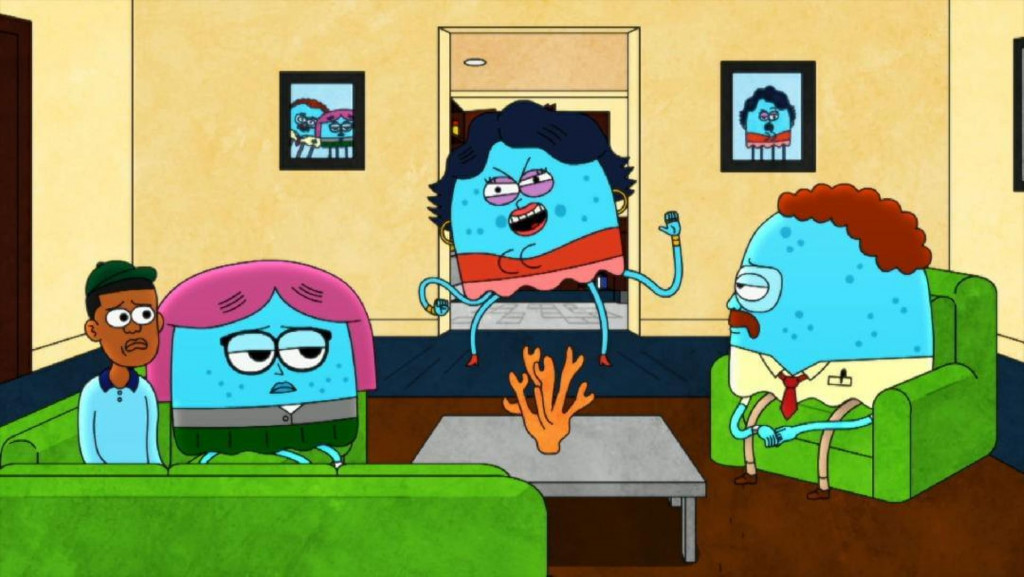 ‘The Jellies!’ is an American adult animation sitcom that airs on Adult Swim, the network best known for shows like ‘Rick and Morty‘ and ‘Samurai Jack‘. ‘The Jellies!’ first premiered on October 22, 2017. The show has been conceived and conceptualized by Tyler Okonma and Lionel Boyce. The idea of the show was taken from a series that featured the same name and was shown exclusively on Tyler’s Golf Media app only. The animation for the show is produced by the Augenblick Studios, and each episode has 11 minutes running time.

Revolving around a family of jellyfishes, the show has surreal storytelling and has been widely applauded by the critics. It has gathered a steady fan following and has been lauded for packing a strong punch and message in very little time. On being questioned in almost all interviews as to why the main character was black instead of white, Tyler replies “We were like, ‘Oh yeah, let’s make him black.’ Then we started to notice that he wasn’t going to be like any other black cartoon character, where every five seconds you have to point out the fact that they’re black.”

The Jellies Cast: Who is in it?

The cast of ‘The Jellies!’ is led by Phil LaMarr who is known for his voice acting in ‘Justice League‘. He lends his voice to the character of Cornell Jelly, the 16-year-old human boy. Co-starring with him is AJ Johnson of ‘The Beast’ (1996) who is the voice behind the role of Debbie Jelly. With her is Earl Skakel who featured in ‘The Barry and Ro Show’ (2015), lending his voice to the character of Barry Jelly. Blake Anderson of ‘Workaholics’ series lends his voice RG.

Kevin Michael Richardson, who was nominated for two Day Time Emmy Awards for voicing Joker in ‘The Batman‘ (2004 to 2008), is seen voicing the character of Reggie. Lakisha Kimberly Robinson, also known as Kilo Kish who is famous for her studio album ‘Reflections in Real Time’ gives the voice of KY Jelly. Joining the main cast is Tyler who is also the creator of the show; he does various voices of different characters. Lionel Boyce, who is also the co-creator, is seen voicing multiple characters in the show. Jasper Dolphin and Taco Bennett also lend their voices, and together, they manage to bring all the characters to life.

The Jellies Plot: What is it about?

The main plot of ‘The Jellies!’ revolves around a world where anthropomorphic animals and humans live together. Living in this world is a family of jellies who adopt a human boy named Cornell. When the sixteen-year-old teenager finds out that he is adopted, he is shocked and loses his mind, spiraling out of control and going on a task to “find himself”. This lands his friends and family into various situations, most of which are uncannily funny.

What is most remarkable about the series is how unconventional it is right at the offset. It is a black kid adopted by a jellyfish family. LaMarr, who plays the protagonist, spoke about the series, saying, “Well, it’s your typical “black kid adopted by a jellyfish” sitcom. Like you do. The thing I love most about it is — like you said — it’s this incredibly strange world, but in and of itself, everything is normal. You know, that’s how it would work if you had a whale next door. . . . That’s the thing about it. I remember reading the script, and like, there wasn’t anything you could compare Jellies to. ‘It’s kinda like…’ No, not like that. It’s unique, which, these days, that’s hard to do.”

In the world of The Jellies, humans and anthropomorphic animals seem to co-exist in harmony, and one is obviously reminded of ‘BoJack Horseman‘. There are definitely some weird moments of silliness, but the overall theme of a teenager trying to figure out who they are is something that everyone can relate to. Truth be told, the series might not be embraced by everyone, but the fact of the matter is, the series is honest about its humor. It puts the quirks forth, showing that we can all be different and still manage to live together.

Furthermore, the show hints at an archetypal behavior that is relatable to everyone, vis-a-vis, a search for one’s own identity. One might not have heard of having a whale as a next-door neighbor unless you’re watching ‘Spongebob Squarepants’, but one has to admit that the story at the crux of the show is a universal one. Perhaps, it would be wise to return to LaMarr’s take on the show, when he surmised it, saying, “Nope, no, it’s not like any other family cartoon. It’s not like any other crazy-world cartoon. I love it. And it’s funny. That’s the other thing. A lot of times you get strange or funny, but in this one, you get both.”

Hopefully, the series continues being this combination of funny and strange in the next season as well, since it is the quirk of being a little left to the center that sets this show apart, and makes it such an enjoyable watch.

The Jellies Season 3 Release Date: When will it Premiere?

‘The Jellies!’ Season 2 premiered on May 19, 2019. As far as the next season goes, we don’t have an official announcement yet. Though considering how popular the show has been for Adult Swim, we are quite sure that the show will get to see another season. If the show does get renewed, our best guess is that ‘The Jellies!’ Season 3 can release sometime in May, 2020. We will update this section as soon as we learn more.

While we wait for the next season, you can check out the trailer for Season 2 of ‘The Jellies!’. If you have not seen the series yet, there is time to catch up on it, since the episodes are rather short. You do not want to miss out on this quirky series and we recommend you give the show a watch and be right in time to catch the new season when it airs.