When Will The Jim Jefferies Show Season 4 Premiere on Comedy Central? 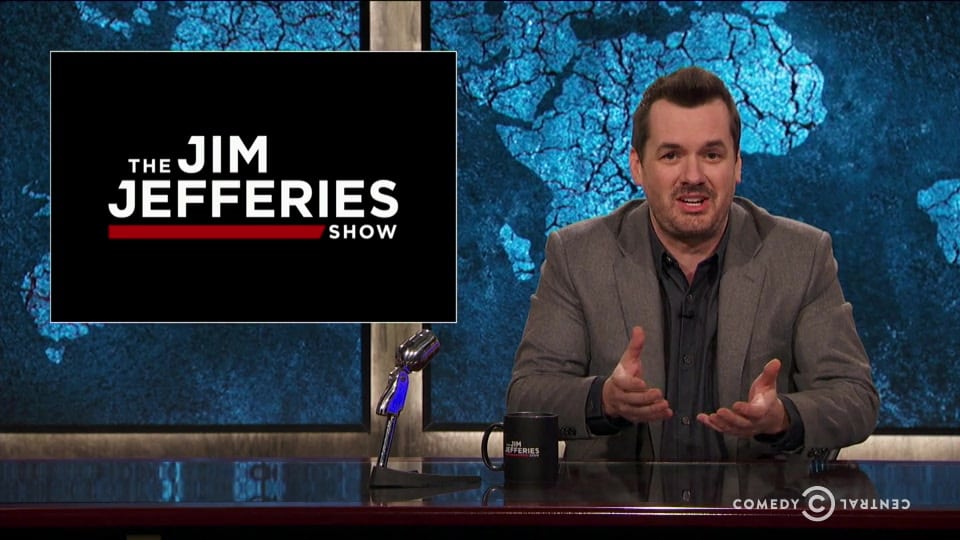 ‘The Jim Jefferies Show’ is a late night talk show and news satire that airs on Comedy Central. The series first premiered on June 6, 2017, and is hosted by the comedian Jim Jefferies. The comedy show is written by Jason Reich and deals with the current happenings around the world. Brian McAloon serves as the director of the show with Alex Murray, Scott Zabielski, Jefferies himself and Tim Sarkes serving as the executive producers.

The show is set in the Sunset Las Palmas Studios in California and is edited by Chris McKinley and Tonya Dreher. The series does not shy away from tackling the most controversial issues and top stories of the week, and Jefferies has made quite a name for himself, having earned a steadily growing and loyal fan base. The show has had three successful seasons so far. Now the question is, will there be a ‘The Jim Jefferies Show’ season 4? We will delve into that question, but first let’s quickly look into the details of the series.

The Jim Jefferies Show Season 4 Release Date: When will it premiere?

Comedy Central has not made any official announcements yet about future of the show. However, we have to take into account the fact that the series is very popular among the fans, and Jefferies himself is an amazing host. When all of this is considered along with the fact that there are plenty of uncomfortable issues around the world that need a satirical spin for increased awareness, there really is no reason for Comedy Central not to renew the show for another season. Though there hasn’t been any update till now.

The Jim Jefferies Show Cast: Who is in it?

The host of ‘The Jim Jefferies Show’ is the comedian Jim Jefferies, who is known for his work in the comedy series ‘Legit’. The stand-up comedian plays the role of the news reader on the show and tackles the news with piercing insight, making the show a political satire. The show also sometimes features Brad Pitt who plays the role of a weatherman. After seeing the series, Brad Pitt became a fan of Jim Jefferies and was enthusiastic about becoming a part of the show, hence he took up the role. Jefferies is known for his off-color humor and his tendency to attack political issues. Apart from Pitt, the show has seen other notable names like Oasis band member Noel Gallagher, and stars like Seth Rogen appear on the show.

Season 4, if it happens, will see Jefferies return as the host. He might be joined by our generic weatherman, Pitt. We also hope to see more stars and new faces come on to the show as the host does not hold back with his humor or his stance on issues that are of concern to America and the world at large.

The Jim Jefferies Show Plot: What is it about?

‘The Jim Jefferies Show’ is a political satire that deals with the week’s top news. It features Jim Jefferies honest and unapologetic take on the cultural and political news. “You’d think I’d stop being surprised at how smart and funny Jim is about everything,” said the president of Comedy Central, Kent Alterman “I’m just glad we’re still giving visas to people from whatever shithole country he comes from.” It is a no holds barred kind of show and Jefferies just lets loose, talking about whatever is bothering him, be it politics, social issues, or pop culture.

What stands out in the show is the host and his way of dealing with humor itself. Jefferies tries to be a little belligerent at times when it comes to his common sense. He pretends not to understand something, playing dumb, just to hit the bottom line with a degree of clarity, before turning the situation around as if to ask the audience that if someone like him can get it, why can we not do the same.

Jefferies brings what The New York Times so eloquently describes as ‘enlightened crudity’ to his show. He always strikes a fine balance between an intelligent host pretending to be ordinary, while delivering some raunchy punch lines. Reliant on the stand-up format of comedy, with the setup of the joke and then the laughter, Jefferies is not beyond using graphical pointers to get his message across.

However, despite his compassionate humor, Jefferies is trying to be like many of the other hosts who are now attacking Donald Trump and his inaccurate statements. Perhaps, Jefferies would be better off embracing his own sharp humor as we saw in ‘Legit’ for this show as well, if he wants to stand out among the crowd of comedians poking fun at the President.

Without making any complicated political analysis, Jefferies keeps his jokes similar and direct — instead of using complex roundabout ways like the other hosts — to have a wider outreach.

In season 4, if it is commissioned, we will see more of Jefferies as he takes on the sociopolitical issues that only seem to worsen with time. We also hope that some guest stars are invited as these talk shows always attract more viewers if we can get to listen to what a celebrity has to say about a particular matter.

Check out the season 3 trailer below.