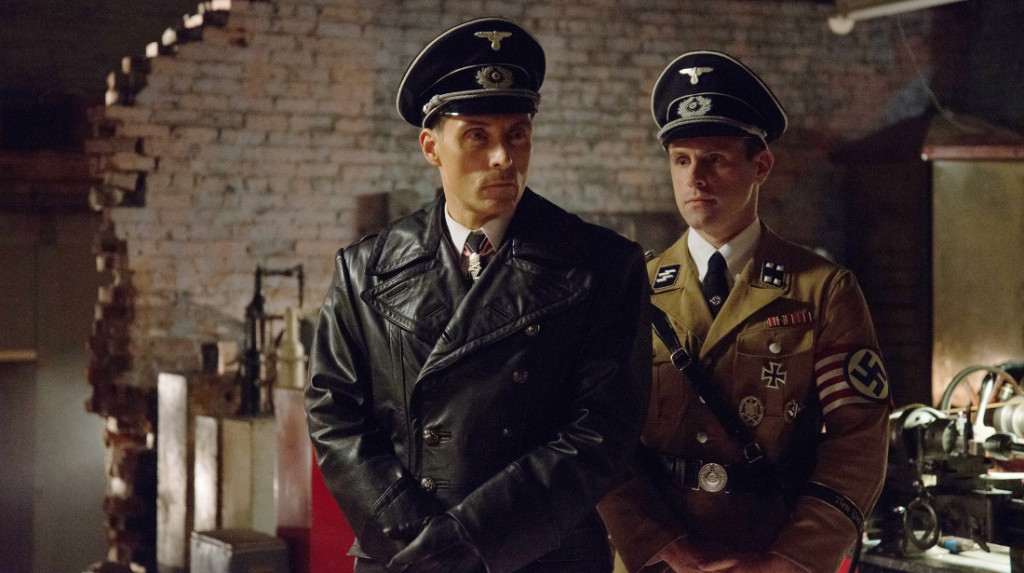 It was ‘Blade Runner‘ that pushed the works of Philip K. Dick into the spotlight of mainstream Hollywood, and now, one of his novels, ‘The Man in the High Castle’, which came out in 1962, has been made into a television show. As with most of the author’s works, this show includes elements of dystopic science fiction but also goes beyond to account for alternate universes and timelines.

‘The Man in the High Castle’ airs on Amazon Prime, and first premiered on January 15, 2015. It has been created by Frank Spotnitz, who is best known for his work on ‘The X-Files‘. The story is set in a dystopian alternate timeline, where we see Nazi Germany and the Empire of Japan have managed to divide the USA into the Greater Nazi Reich in the east, with New York City serving as the regional capital, and the Japanese Pacific States to the west, where San Francisco is the regional capital. The territories are separated by a neutral zone, that is, the Rocky Mountains. When the series starts in 1962, we are introduced to characters whose destinies intertwine when they come across footage that shows Germany losing the war. The show’s title is a reference to the mysterious figure who is believed to have created this footage.

Before you go on to read about ‘The Man in the High Castle’ allow us to point out that the show begins with a haunting rendition of Edelweiss. The rest has been summed up well by critics who have said, “By executive producer Ridley Scott, ‘The Man in the High Castle’ is unlike anything else on TV, with an immediately engrossing plot driven by quickly developed characters in a fully realized post-WWII dystopia.”

The Man in the High Castle Cast: Who is in it?

The cast of ‘The Man in the High Castle’ is led by Alexa Davalos, of ‘The Mist‘ fame, as Juliana Crain, an aikido trained young woman who rebels when she gets to know of the man in the high castle and his films. Rupert Evans plays Frank Frink, Juliana’s boyfriend who later begins to work with the American resistance. Luke Kleintank stars as Joe Blake, the newest recruit of the American resistance who actually works under SS Obergruppenführer.

Other cast members are Rufus as John Smith, an SS Obergruppenführer, DJ Qualls, who appeared in ‘Breaking Bad‘, appears as Ed McCarthy, Frank’s friend, and co-worker, while Joel de la Fuente is seen as Chief Inspector Takeshi Kido, the merciless head of the Japanese army’s police, stationed in San Francisco.

In season 4, apart from the recurring cast members, there will be some new faces like Frances Turner, known for ‘The Gifted‘, who will play the part of  Bell Mallory, a character who escapes a Nazi concentration camp and flees to the Japanese Pacific States to join a guerilla movement that is composed of black liberationists. Cle Bennett, who appeared in ‘Homeland‘, plays Elijah, who joins the movement with Bell. The final addition is Rich Ting who plays the part of Captain Iijima, someone working closely with the ruthless Takeshi Kido.

The Man in the High Castle Plot: What is it about?

‘The Man in the High Castle’, loosely based Philip K. Dick’s novel of the same name, “takes a look at what the world might look like had the outcome of World War II turned out differently. In this dystopian scenario, the Axis powers won the war, leading to the United States being divided into three parts, an area controlled by the Japanese, a Nazi-controlled section, and a buffer zone between the two. Despite the oppression, a new hope emerges when films turn up that seem to show a different world. A woman believes the films contain the key to freedom and is determined to find their mysterious guardian.”

Over the seasons, we have seen a war stirring, with resistance fighters clashing against the Axis powers and the two Axis powers butting heads with each other as well. In the past, ‘The Man in the High Castle’ has all been about the strive for answers and victories, not to mention resolutions, which get blurrier as the lines between good and evil mix.

The season 4, which is said to be the final one of the show, is expected to answer any remaining questions, tie up loose ends and bring the series to a proper conclusion. In the final season, we are expected to see the resistance become a full-blown rebellion, which will be driven by Juliana’s visions of a better world. In the meanwhile, a new Black insurgency is likely to emerge, which will fight Nazism and imperialism. As the empires reel from the backlashes, Chief Inspector Takeshi Kido is going to find himself torn between his bonds to his family and duty to his country, while Reichsmarschall John Smith will find himself drawn towards a portal that the Nazis have built to another world, as he grapples with the tantalizing possibility of stepping through it to a road not taken.

The Man in the High Castle Season 4 Release Date: When will it premiere?

An official statement was released, by executive producer Isa Dick Hackett, about the show coming to an end, which read “It has been a great privilege to work alongside our extraordinary High Castle team, in partnership with David Zucker and Scott Free, to bring my father’s classic novel to life, particularly during this tumultuous period in our real world. I believe fans will be thrilled and satisfied by the epic conclusion we have in store for them. I am very grateful for the ongoing support from Amazon as we produce this final season, and look forward to building on this extremely successful partnership. Stay tuned; there’s more to come!”

The Man in the High Castle Trailer:

You can check out the official trailer for ‘The Man in the High Castle’ season 4 below to get an idea of what is to come. If you have not seen the series and happen to enjoy serious science-fiction, this is the perfect time to acquaint yourself with the series before the final season arrives.