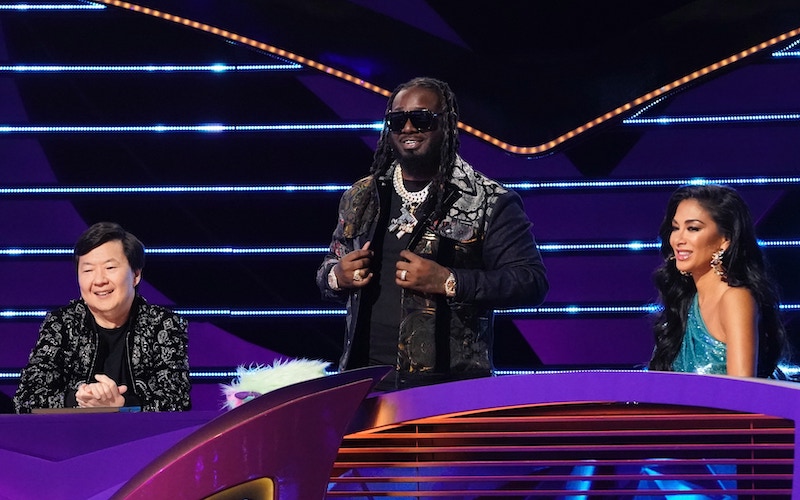 ‘The Masked Singer‘ Season 3 wraps up the Group B finale in this episode. Frog, Taco, Banana, and Kitty take the stage. With performances heating up, and the clues getting more enigmatic, you might be wondering about who gets eliminated at the end of this episode.

We have got you covered in that regard, as we also tell you when and where to watch the upcoming episode.

The Masked Singer Season 3 Episode 7 Release Date: When Does it Premiere?

‘The Masked Singer’ Season 3 Episode 7 is slated to release on Wednesday, March 11, 2020, at 8 PM ET. The upcoming episode will see an all-new group. Now we move on to Group C and will witness Astronaut, Bear, T-Rex, Night Angel, Swan, and Rhino, taking the stage.

Where to Watch The Masked Singer Season 3 Episode 7 Online?

This episode is centered around the theme of friendship, with Season 1 winner, T-Pain, joining as the guest panelist. All the performers take the stage together, singing “Larger Than Life” by the Backstreet Boys. We get some clues from the performance, with Kitty looking to seal the deal, and Banana saying it is more inspiring than doing laundry. Taco’s clue is that he enjoys a lot of salsas, while Frog says that he has opened the door for the biggest artists.

This week’s clue package includes something that individuals close to the performers disclose. Moreover, the performers give the panelists a friendship bracelet, which also contains clues.

Kitty is the first performer tonight, as she belts out Miranda Lambert’s ‘Mama’s Broken Heart’. Her BFF dishes out some gossip. Her friend with long green hair, comments on how long she’s known Kitty. She comments on how Kitty would come up with horror films for friends to star in and told a classmate that she could see a ghost. Kitty might be angelic but has a dark side.

Taco is up next performing “Can’t Help Myself” by The Four Tops. The clues include a ‘ME’ highlighted in a menu card. Taco’s friend speaks of how he helps people when they are down. We see baked beans, a washboard, and the mate saying cheers, as he pours what appears to be whiskey, on a wafting seafood platter.

He gives Nicole a friendship bracelet, which says ‘kiss’. Thicke feels it is Howie Mandel, while Jenny guesses Jerry Springer. Nicole guesses it might be Barry Manilow.

Banana also delivers a notable performance, with his rendition of “Lean On Me” by Bill Withers. His children seem to be the ones providing his clue package. They are probably his daughters, and they say how he taught them driving in go-carts, and served as a role model. Banana gives the bracelet to Jenny, and it says ‘nineties love’. She guesses it might be Michael Andretti, while Ken sticks to Larry the Cable Guy. Nicole feels it might be Brad Paisley and T-Pain guesses Johnny Knoxville.

Frog is the final performer, who belts out “You Dropped a Bomb on Me” by The Gap Band. He has a female friend, who seems to be invisible but wears a fur coat. Her clues tell us that she knew Frog when he was a tadpole and realized he’d be a superstar. She took him to a late-night talk show in LA, where he seemed to be mature beyond his years. He seemed to have an entourage even then.

We see some bathing products like shampoo, and a green bowtie as well. Frog gives his bracelet to T-Pain, and it reads ‘all we do is win’. The Season 1 winner guesses it is Ludacris, while Thicke still believes it is Omarion. Jeong feels it might be Tommy Davidson.

Taco is voted out today, and before he is unmasked, the judges make their final guesses. Nicole goes with Barry Manilow, interpreting the ‘ME’ as Emmys. Ken and Robin feel it might be Martin Short, Jenny goes with Jerry Springer, while T-Pain feels it might be Kelsey Grammer. Finally, Taco reveals himself to be Tom Bergeron.

Notably, we’d guessed the identity correctly, from the clues. The VHS tapes refer to ‘America’s Funniest Home Videos’, while the red trolley is a reference to the song for ‘Mr. Rogers’ album. The baked beans refer to Boston, where Tom is from. His friend in the clue package is Bob Saget, and he gives Nicole the bracelet because she’d performed to a Kiss song in ‘Dancing with the Stars‘.