When Will The Misery Index Season 2 Premiere on TBS? 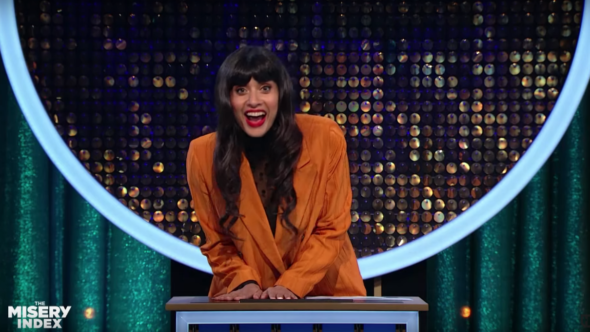 ‘The Misery Index’ is a game reality show which airs on TBS and is based on the popular card game ‘Sh*t Happens’. Created by Ben and Dan Newmark alongside Andy Breckman (‘Monk’ and ‘The Good Cop‘), it pits two 3-member teams against each other as they try to rank true, miserable yet hilarious real-life events on a scale of 1 to 100.

The first season of the show was well-received. Now the next question is: when will ‘The Misery Index’ season 2 release? Read on to know!

The Misery Index Season 2 Release Date: When Will it Premiere?

Ranked among the top-five new cable comedies, season 1 of the show garnered around 28 million viewers across linear, VOD, and digital platforms. Hence, TBS quickly renewed the show for another season via an announcement on December 3, 2019, ahead of the season 1 finale.

Brett Weitz, General Manager for TNT, TBS, & truTV, confirmed the news in a press release, saying: “Jameela and the Tenderloins have wholeheartedly translated the most miserable of mishaps into absolute amusement, giving the audience and contestants permission to be entertained by these misfortunes. We couldn’t be more excited to continue our relationship with these five brilliantly talented comedians.”

She is joined by The Tenderloins comedy troupe (Brian “Q” Quinn, James “Murr” Murray, Joe Gatto, and Sal Vulcano), who star in truTV’s ‘Impractical Jokers‘ — ranked as the number 1 original cable comedy series in primetime among adults aged between 18 to 49 and 18 to 34. The Tenderloins are highschool buddies who formed their group way back in 1999. They garnered huge success with ‘Impractical Jokers’ after multiple years of performing in live improv and sketch comedy shows as well as filming viral sketches and sharing them on the Internet.

All the aforementioned cast members are making their returns in season 2.

What Can The Misery Index Season 2 be About?

Host Jameela Jamil serves as ‘The Misery Index’s “ringleader” and asks a few “entertainingly cringeworthy questions” to each of the two teams in that particular episode. Each team consists of two members from The Tenderloins and one regular individual. The groups need to compete against each other “by attempting to rate hilarious and miserable real-life events on a scale of 1-100” based on the ‘Misery Index’ — a ranking formula developed by expert and seasoned therapists.

The format of the game comprises three rating rounds, with a numerical scale of 1-100 based on the “Three Pillars of Misery” — “physical pain, emotional trauma, and long-term psychological impact.” Each contestant begins by relating his/her miserable story, the rating of which is not immediately disclosed.

The rounds are called Misery Lane, More or Less Miserable, and Master of Misery. The first round gives a chance to win $500, the second round comes with a prize of $1,000 and the third round gives the winner a cash amount of $2,000. The one with the closest guess then proceeds to the bonus round, which doubles the original stake of $2,000 to $4,000 (if the participant can give an exact guess).

The final stage is called Margin of Misery, where the winning contestant is presented with three miserable stories, and he/she has to guess the rating (with a slight margin of error). The first scenario has a value of $5,000, the second story comes at a value of $10,000, and the third story can fetch an amount of $15,000. As you can see, the maximum potential winnings per episode are $35,500.

‘The Misery Index’ is ridiculously funny because it allows you to extract humor from mishaps and disasters faced by others. It attempts to explore how everyone’s life is messed up. Adding in a feel-good factor, it tries to emphasize that our lives may be bad but they could be worse. The episodes feature a string of misery stories that are unforgivingly funny and we cannot help but indulge in this dosage of a guilty pleasure.

For instance, there is this scene where the show poses an incredibly evil face-off between a kid who is left alone in the forest since he ate a Pop-Tart without permission and another 9-year-old child who is finally weaned off breastfeeding. Again, we meet a woman who gets a bout of diarrhea after every orgasm and a man who has been housing a leech (2 inches in length and still alive) inside his nose. Additional episodes tell stories of an employee getting fired, someone accidentally sexting his grandfather, an individual being stuck in an elevator for a whole night, and a person walking in on his grandparents having sex.

Are these incidents miserable enough? Wait till you see this guy who unclogs his toilet only to encounter a python slithering out of the pipe! In yet another event, a guy holds a dove and seeks to release it after he delivers a eulogy for a friend — only to realize that he ends up killing the bird while talking. Worse still, what about that guy who visits the surgeon to get his leg amputated but ends up with his other leg removed instead? On a brighter note, he revisits the clinic and is successful in finally getting the correct leg operated. Surpassing everything is Jamil’s favorite incident, where a woman chops off the you-know-what of her unfaithful husband. But a doctor re-attaches it. So, she sneaks inside the hospital and repeats the act again, throwing it outside the window — only to be picked up and stolen by a raccoon!

The creators of ‘The Misery Index’ have made sure that none of the highlighted incidents feature a human who is seriously maimed or deceased. These are just miserable happenings that become comedy fodder for viewers, something that will form the basis of the format for season 2 as well.

You can check out the official trailer of ‘The Misery Index’ season 2 below: