Where to Stream The Morning Show? 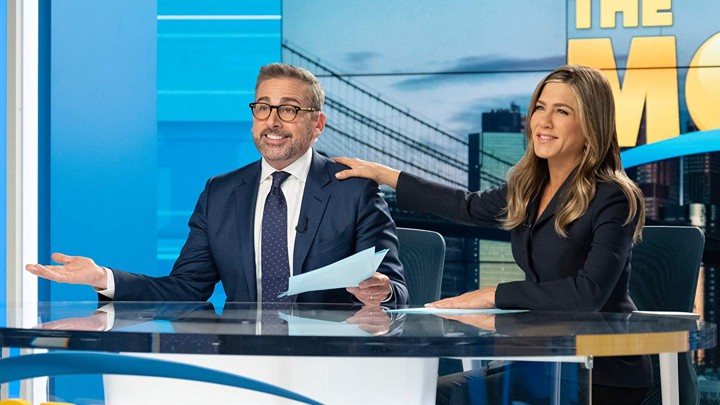 Apple is one of the biggest companies in the whole world, and anything that they come out with will naturally be bigger and better than anything we have ever witnessed. This is exactly what we have seen with the launch of their new streaming platform, Apple TV+. The first show which premiered on this channel is ‘The Morning Show‘ which created a huge buzz soon after its announcement because of the star-studded cast comprising of Jennifer Aniston, Reese Witherspoon, and Steve Carell.

‘The Morning Show’ centers around people working in the television industry itself, with a special focus on morning news shows. The series is inspired from the book ‘Top of the Morning: Inside the Cutthroat World of Morning TV’ written by journalist Brian Stelter. Aniston’s character, Alex Levy, is the protagonist of the series, and it is her journey in this highly competitive world at the top of the television industry that we follow. With television still being one of the most popular media for infotainment, this is a show that is bound to tickle your fancy. So are you excited to know where you can watch ‘The Morning Show’? We are here to tell you just that. But first, here is what the show is exactly about:

What is The Morning Show About?

‘The Morning Show’ centers around a show with a similar name on which Alex Levy and Mitch Kessler (Carell) are newscasters. This show is one of the most popular things on American television and has almost shaped the nation’s conscience for quite some time now. The smooth journey for the two hosts suddenly ends when Kessler gets accused of sexual misconduct and is immediately fired from the show. This incident not only damages the reputation of ‘The Morning Show’, but also causes immense harm to the career of Levy whose popularity always depended on the chemistry she shared with Kessler. It is at this point of time in her life that Levy comes across Bradley Jackson (Witherspoon), a field reporter who becomes her fierce rival while Alex is desperately trying to hold on to her reputation as America’s favorite news anchor.

‘The Morning Show’ tackles issues that are becoming more and more prevalent in today’s world. From the eminent TV host Charlie Rose to Fox’s Roger Ailes, many big names of the television industry have been exposed when the #MeToo movement started and took down such influential people who have been getting away with sexual misconduct for years now. The series has also managed to gather more attention because this is the first time Aniston is taking up the main role in a TV series after the conclusion of the legendary ‘Friends’ in 2004.

Besides being a TV series very pertinent to our times, ‘The Morning Show’ also boasts of brilliant performances by Aniston and Reese Witherspoon (who has very recently been absolutely brilliant in ‘Big Little Lies’). Steve Carell, with his small but very important role, is also someone who has done his job perfectly.

Is The Morning Show on Netflix?

While Netflix does boast of some of the best original TV shows, ‘The Morning Show’ is one that has not been made available on the streaming platform. Instead, you can check out the adult animated sitcom ‘BoJack Horseman‘ on Netflix which deals with the life of a former TV star who is now living at the absolute edge of the industry.

Is The Morning Show on Hulu?

Hulu is one of the biggest streaming platforms in the world right now, and it does boast of some fantastic original shows which have been loved by the audiences as well as the critics. You can watch some wildly popular shows like ‘The Handmaid’s Tale‘ and ‘The Act‘ on Hulu. Unfortunately, you will not be able to stream ‘The Morning Show’ on Hulu.

Is The Morning Show on Amazon Prime?

Amazon Prime has some truly amazing shows on its platform, not only from America, but from all over the world. Prime can easily be called the second most important and influential streaming platform in the world today after Netflix, but unfortunately, this platform is also not the one where you can watch ‘The Morning Show’.

Where Can I Stream The Morning Show?

Apple has recently launched their own streaming platform, Apple TV+, and this is the only place where you can watch ‘The Morning Show’ as of now. The Apple TV app, which can be found on all Apple devices, can be used by viewers to stream the series. Apple TV+ is a subscription-based channel that needs $5 per month for you to keep watching movies and shows on it.

Can I Stream The Morning Show for free?

If you really want to watch The Morning Show without going for the subscription, there is one way in which you can do so. Apple TV+ has a seven-day free trial, and you can use that to watch the series for free. But make sure you start watching only after all the episodes of Season 1 are released on the platform.