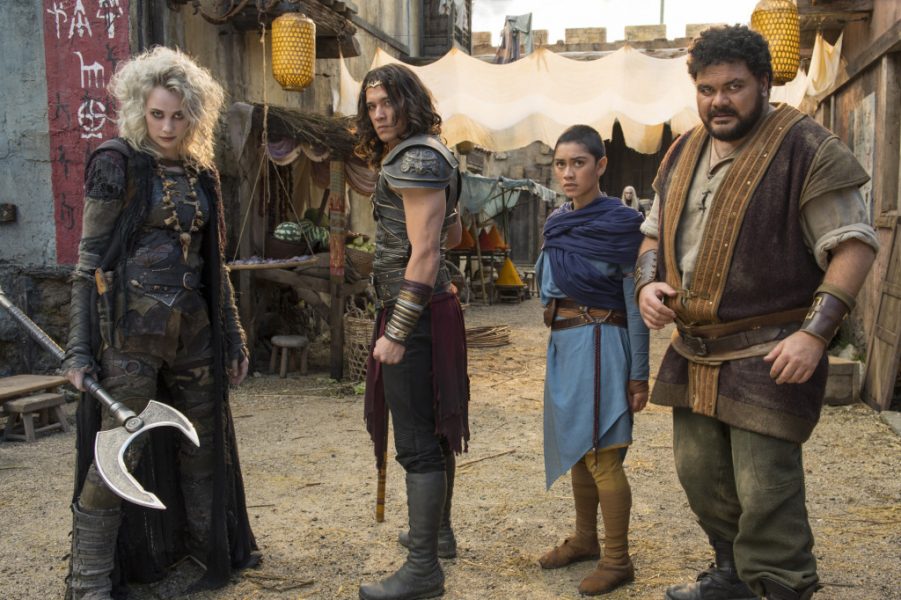 ‘The New Legends of Monkey’ is a television series that airs on Netflix, Australia’s ABC network, and Television New Zealand (TVNZ). Written by Jacquelin Perske, Craig Irvin, and Samantha Strauss, the show is the inspired by the 1970s-80s Japanese television show ‘Monkey’ which, in turn, was based on a 16th century Chinese novel called Journey to the West, which is attributed to the Chinese novelist Wu Cheng’en. For those unaware, Journey to the West is a novel which has seen nearly a dozen television and big screen adaptations, some of which include Jackie Chan and Jet Li starrer ‘The Forbidden Kingdom’ (2008), Donnie Yen and Chow Yun-fat starrer ‘The Monkey King’ (2014).

Almost three decades after the original show aired, ABC, Netflix, and TVNZ, on April 20, 2017, announced that it was making a live-action show called ‘The New Legends of Monkey’ based on Journey to the West. Filming for the show took place in New Zealand, and half-a-year of production, the first three episodes of Season 1 premiered in Australia on January 28, 2018, while the remaining seven episodes were released daily up until February 4, 2018. A couple of months later, the show debuted worldwide on Netflix on April 28, 2018.

The New Legends of Monkey Cast: Who is in it?

While the show has quite a few characters there are four protagonists. Chai Hansen plays the role of the Monkey King (as known as Sun Wukong in the novel). Luciane Buchanan, meanwhile, plays the Buddhist monk Tripitaka (known as Tang Sanzang in the novel). Tripitaka’s two helpers, Pigsy (also known as Zhu Bajie) and Sandy (also known as Shā Wùjìng) are played by Josh Thomson and Emilie Cocquerel, respectively.

If ‘The New Legends of Monkey’ does get renewed for a second season, we expect all the main cast members and quite a few of the recurring cast members to make a comeback and reprise their roles.

However, it should be mentioned here that the show came under quite some criticism for “whitewashing” the cast – although the characters are all Chinese, none of the cast members are of Chinese descent, and only one of them, namely Chai Hansen, is of Asian descent, with his father being Thai.

The New Legends of Monkey Plot: What is it about?

Being based on Journey to the West, ‘The New Legends of Monkey’ has high fantasy elements and is based in a world where the earthly realm has been taken over by demons, who have forced the gods into hiding. The demons rule the land and oppresses humans, and the gods do not have any power to overthrow them.

In this setting, a scholar hatches a plan to bring together some warriors and monks to free the legendary Monkey King, who was imprisoned under a mountain 500 years ago. However, on the night the scholar and his group are supposed to embark on their quest, a powerful demon raids his house and kills everyone except his adopted daughter. With his dying breath, the scholar passes on the details of his plan to his adopted daughter, who assumes the identity of Tripitaka and ventures out into the dangerous world to free the Monkey King.

However, Tripitaka’s faces a hurdle in her quest when she heads into a town and is forced to work at a tavern. Although she gains a room and a job, her quest comes to a standstill. But, when the demon who killed her adoptive father also comes to the town in search of her, she secretly steals the magical crown and makes a run for it. Although the demons scour the town for her, she manages to escape with the help of another monk. Having escaped, Tripitaka then heads to the Monkey King’s tomb where she places the magical crown on the legendary warrior’s visage, thus breaking him free from imprisonment. With the Monkey King free, the duo return to town and enlist the help of Pigsy and Sandy, who are gods in disguise, and together the group ventures out into the world to retrieve lost, ancient scrolls of wisdom that have the power to purge the land and rid it of demons.

As far as reception goes, ‘The New Legends of Monkey’ enjoys critical acclaim, despite the criticism of whitewashing its cast – it has a perfect score of 100% on review aggregator website Rotten Tomatoes. On IMDb, the show has a decent rating of 6.7/10.

The New Legends of Monkey Season 2 Release Date: When does it premiere?

Season 1 of ‘The New Legends of Monkey’ premiered on April 28, 2018. Since then neither ABC nor Netflix have made any announcements pertaining to the future of the show. While this delay does come off as bad news, it is better to be optimistic and wait a bit more. Our best guess is that if the show does get renewed, Season 2 of‘The New Legends of Monkey’ can release sometime in 2020,

However, nothing can be said as of now, and we have no option but to wait. We are keeping an eye out for news pertaining to the future of the show, and we will update this section when we hear more.

The New Legends of Monkey Trailer:

While we wait for news on the future of the show, here is the trailer for Season 1 to give you a glimpse into the show and the fantastical journey that awaits if you should you choose to watch it.