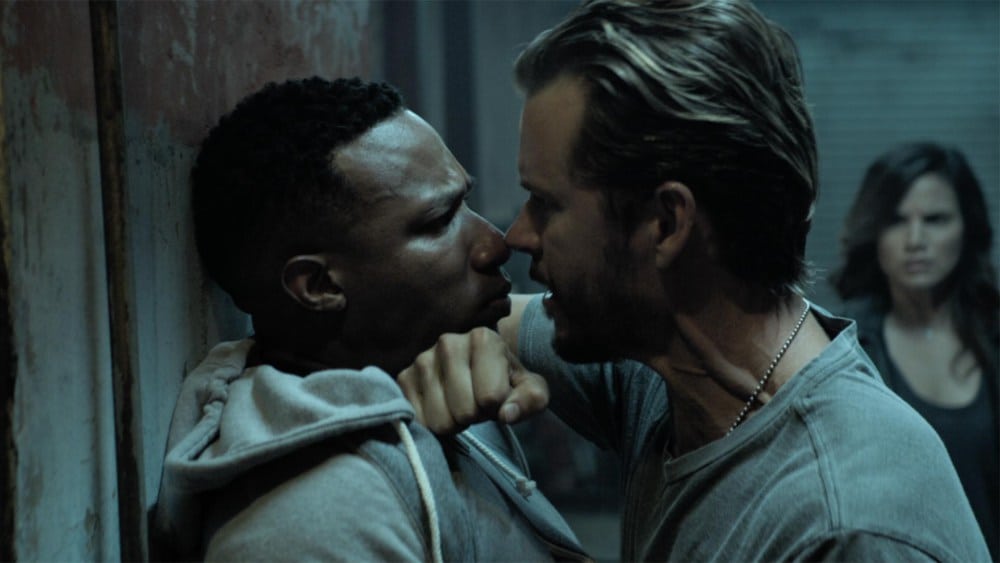 A relatively new show, Season 1 of ‘The Oath’, consisting of 10 episodes, made its way to viewers’ screens on March 8, 2018. A little over a month later, on April 24, 2018, Sony Crackle announced that it had renewed the show for a second season. Subsequently, Season 2, consisting of eight episodes, premiered on February 21, 2019. Now, fans of the show are wondering whether ‘The Oath’ will return again with another season of intense drama.

The Oath Cast: Who’s in it?

As far as the cast of ‘The Oath’ is concerned, the show boasts a lot of heavy-hitters.

The “protagonist” of the show, Steve Hammond, is played by Ryan Kwanten of ‘True Blood’ fame, while his brother, Cole Hammond, is played by Cory Hardrict, who starred in ‘American Sniper’. Meanwhile, Sean Bean of ‘Game of Thrones’ fame plays the patriarch of the Hammond family, Tom Hammond, and Linda Purl of ‘Homeland’ joins him as Steve and Cole’s cancer-stricken mother, Gwenn Hammond.

Apart from the Hammonds, Katrina Law of ‘Spartacus: Blood and Sand’ plays Karen Beach, and Joseph Julian Soria of ‘Army Wives’ plays Pete Ramos. Michael Malarkey of ‘The Vampire Diaries’, Kwame Patterson of ‘The Wire’, and Eve Mauro of ‘CSI: Miami’ also star in the show in the roles of Sam Foster, Neckbone, and Theresa Winters, respectively.

It should be noted here that some of the aforementioned characters, like Sean Bean’s one, are season specific, and do not appear in the two seasons that have aired thus far. These characters aside, there are several other characters who make recurring or episodic appearances throughout the show. If the show does get renewed for Season 3, we would expect Ryan Kwanten, Cory Hardrict, Katrina Law, and Joseph Julian Soria to make a comeback at least.

The Oath Plot: What is it about?

What if those who are sworn to serve and protect us take advantage of their power and authority to turn into hardened criminals themselves? This is the central question at the heart of ‘The Oath’, and the show chronicles the lives of some of these cops-turned-criminals as they lead their dual lives, and uphold their vows of loyalty to protect each other in times of adversity.

Set in a fictional American metropolis, the show revolves around some ultra-secret gangs with names like Berserkers, Ravens, Vipers etc. that exist within police departments. These corrupt and secret societies, which exist in the shadows, are shown to be nigh impossible to join. However, those officers that make the cut are bound to their gangs for life, and have to stick their necks out for each other at all times, even in prison. It is interesting to note here that the idea for the show was inspired from creator John Halpin’s years of experience as an undercover cop, so you might be tempted to wonder whether such secret societies actually exist in the real world.

In this setting, the show tracks the two primary protagonists, Steven and Cole, who lead a gang called the Ravens and justify their foray into crime owing to the incarceration of their father and the medical expenses required for the treatment of their cancer-stricken mother. Despite this rather stiff, and kind-of-overused plot, things get interesting when the FBI starts investigating the Ravens, and tries to use their leverage on the gang to try and get all the other gangs inside prison. However, in ‘The Oath’, no one is portrayed to be good, and even the FBI agent in charge of the investigation gets involved in the dirty business. What follows is some drama, and much corruption and action.

Yet, while the cast of the show is great, the scope of it is massive, and the simple narrative serves as a good premise, ‘The Oath’ falls really flat when it comes to execution. It is visually unappealing, stylistically bland, and its over-the-top self-seriousness becomes ridiculous at times, thereby ruining whatever potential for greatness it might have had.

Unsurprisingly thus, ‘The Oath’ does not enjoy any degree of extraordinary popularity among its viewers, and has a mediocre rating of 6.5/10 on IMDb. As far as television critics are concerned, most have expressed mixed reactions to the show and its wasted potential. However, it is not rated on Rotten Tomatoes.

The Oath Season 3 Release Date: When will it premiere?

Since Sony Crackle does not release viewership details to the public, it is difficult to gauge how popular ‘The Oath’ exactly is. However, when the network had announced the second season, the chief digital officer of Sony Pictures Television Networks, Eric Berger, had claimed good viewership, saying, “Our audience has truly responded to this authentic, raw, and compelling series. Thanks to Joe, 50 Cent and our stellar ensemble and production team for bringing this powerful story to life. We look forward to taking the next step together.”

Season 2 premiered on February 21, 2019, but since then, Sony has not made any announcement pertaining to the future of ‘The Oath’. We expect Sony to take a call by the end of May 2019. Our best guess is that The Oath season 3 might release sometime in 2020. We will update this section with what the future holds in store for ‘The Oath’ when Sony makes an official announcement pertaining to its fate.

While we await news on the future of ‘The Oath’, here is the trailer for Season 2 to give you a glimpse into the show and the story thus far.