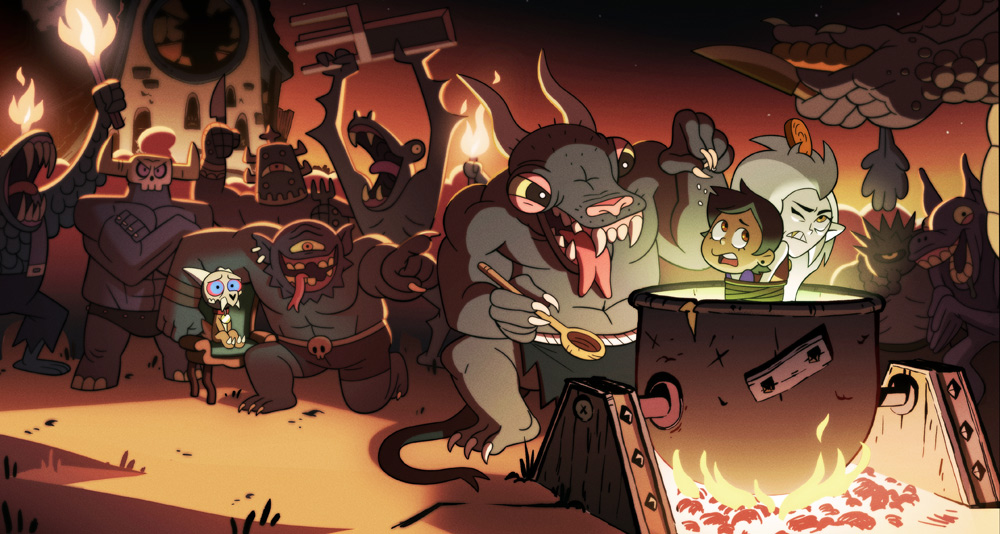 ‘The Owl House’ is a fantasy comedy about a teenage kid named Luz, whose life changes when she accidentally comes across a portal that transports her to a world filled with witches, demons and of course, a shed-load of wizardry.

‘The Owl House’ has been created by Dana Terrace whose previous works include ‘Gravity Falls’ and the ‘Duck Tales’ reboot. Ricky Cometa serves as the art director of this animated horror comedy. He is well known for working as the background painter/animator on ‘Steven Universe’ and ‘Costume Quest.’

It is a kind of show that is going to suck you in by forcing you to think that every episode is only loosely connected to each other, but as you relax, it will punch you in the gut revealing that there’s been an overarching story the entire time. A perfect blend of spookiness and warmth, the show’s dark yet funny premise and vibrant imagery has got people super excited.

The Owl House Cast: Who is in it?

Sarah-Nicole Robles gives her voice to the protagonist Luz, who is a lively and spirited teen, on a mission to become a witch. Sarah is known for her work in ‘Boss Baby’ (voice) and ‘Grey’s Anatomy.’ Joining her is Emmy Award-nominee Wendie Malick (‘American Housewife’) as the feisty and mighty witch Eda, who later becomes Luz’s mentor. ‘Gravity Falls’ fame Alex Hirsch voices the endearing little member of Eda’s army, King. Hirsh is also the voice behind the owl Hootie, who is a conscious doorknocker of ‘The Owl House.’

In addition to the show’s regular cast of voice actors, Golden Globe Nominees Matthew Rhys (‘The Americans’) and Isabella Rossellini (‘Blue Velvet’ and ‘Shut Eye’) appear as guest stars on the show.

The Owl House Plot: What is it About?

‘The Owl House’ narrates the tale of Luz, a spunky teen who is full of life but feels like she doesn’t belong anywhere. One fine day, she chances upon a portal that takes her to a secret world, filled with extraordinary spectres, phantoms and other beings. She is the only human in ‘The Boiling Isles.’ While exploring the realm, Luz meets with a witty and piquant witch, Eda and her sidekick King. King is a tiny warrior whose only desire is to be taken seriously.

Luz soon befriends them and shares her desire to be a witch. Lacking magical powers, Luz asks Eda to serve as her mentor and help her fulfill her mission of becoming a witch. Acting as Eda’s apprentice, Luz learns the tricks and techniques of wizardry at The Owl House. Eda and King become her family away from home in such a short time and together, the pack saves ‘The Boiling Isles’ from dangerous demons and other-worldly threats.

The Owl House Season 1 Release Date: When Will it Premiere?

Get excited to meet Luz, Eda, King and the rest of the Boiling Isles! 🦉 Here is the first batch of episode titles for #TheOwlHouse, premiering Jan 10, 2020 on @DisneyChannel! pic.twitter.com/qoyqjUuaFI

Based on the show’s popularity even before its release, Disney has already ordered ‘The Owl House’ season 2.

Not just that. Disney NOW has also revealed that it is planning to launch a game set in the world of The Owl House. The game enables the players to help Luz fulfill her dream of becoming a witch by collecting points and artifacts, finishing tasks and also by playing mini in-games.

Check out the official trailer of ‘The Owl House’ season 1 and feast your eyes on the mystical oddities!