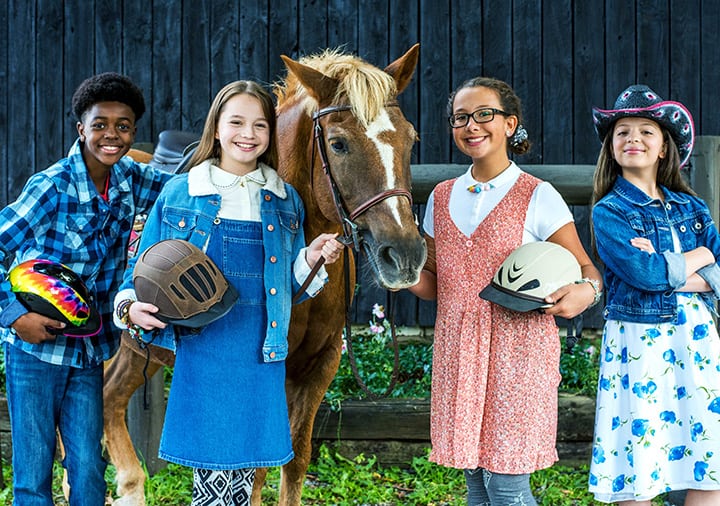 ‘The Ponysitters Club’ is a Canadian children’s web television series that is available on Netflix. Created by Elizabeth Turner and Nancy Yeaman, the show is based on a children’s book by Victoria Carson and follows a group of children who protect and raise horses and ponies on a ranch dedicated to serving abused animals.

A pretty new show, Season 1 of ‘The Ponysitters Club’, consisting of 10 episodes, premiered on August 10, 2018, and was received well by young audiences and parents alike. Subsequently, Netflix renewed the show for a second season, and Season 2, also consisting of 10 episodes, premiered a few months later on November 16, 2018. Now, fans of the show are wondering whether it will return for a third season. Here’s everything we know about the prospects of another season.

The Ponysitters Club Cast: Who is in it?

Being a show for children, ‘The Ponysitters Club’ does not have a very long list of cast members.

The main cast members in the show include Morgan Neundorf as Skye, Cailan Laine Punnewaert as Shelby, Hugh Wilson as Grandpa, Madeline Leon as Billy, Khiyla Aynne as Trish, Zyon Allen as Ethan, Maya Franzoi as Olivia, and Victoria Tomazelli as Isabella.

If the show does return for another season, we expect all the main cast members to make comebacks and reprise their roles.

The Ponysitters Club Plot: What is it about?

The story revolves around Skye, a dyslexic young girl who lives with her mother Shelby and her grandfather. The family is known to be particularly affectionate towards animals and Skye shows a lot of compassion towards and love for nurturing animals as she grows up watching animals in her family’s rescue ranch. Skye happens to see a lot of animals and horses, in particular, being taunted and abused by the people around. So, she decides to rescue and protect these animals with the help of her buddies. With her friends, Olivia, Trish, and Ethan, Skye forms a club called The Ponysitters Club whose mission is to rescue animals in distress and shower them with love and affection by giving them a permanent home in Skye’s rescue ranch. Skye develops a particular interest in Puzzle, one of the rescued horses, and their bond strengthens as the show progresses. The show propagates a beautiful message of love and compassion and how these are badly required in today’s world which is mechanical, materialistic, and largely devoid of empathy.

The show beautifully depicts the pure love displayed by the young children, despite one of them being dyslexic and another having cerebral palsy. The show is considered to be a refreshing replacement for otherwise clichéd children’s series which either deal with clichéd adventures or fascinating gizmos. The creators of the show have been lauded for their efforts to make the current generation of young children understand the value of love and empathy, especially in a world where young children often spend their time on the internet or on their Playstations. Given the bleak and lifeless conditions in which children of the current generation grow up in, it is a pleasure to watch Skye’s rescue ranch full of hopping chickens, playful calves, and gallant horses.

That being said, there’s no plot per se, and the show suffers from the lack of a good script. However, what the show lacks in terms of script is compensated for by its heartwarming depictions of love, empathy, kindness, friendship, and loyalty. Further, the show also places a lot of emphasis on the value of having a good family life, and the three generations which run the rescue ranch are shown to have a strong bond that cannot broken. Additionally, the show also lays some emphasis on having an ethnically diverse cast, and also highlights how people of differing physical abilities can bond together. Thus, on the whole, the show is one which is not just family-friendly, but also inspires children to have positive values which are lifelong assets for any who possess them.

Summing up, ‘The Ponysitters Club’ is a show which children aged seven years and above will enjoy, while also learning important life lessons in the process. However, it is not a show which adults can particularly enjoy, and it’s best left for children to gorge into.

As far as reception is concerned, we don’t know what critics collectively think of the show since it doesn’t have scores on review aggregator websites. Among audiences, it does have some popularity, and it enjoys a decent rating of 6.9/10 on IMDb. Even on Common Sense Media, which rates the suitability of shows for children, ‘The Ponysitters Club’ has a good rating of three out of five stars, with the only shortcoming of the show being that it doesn’t offer much in terms of educational value.

The Ponysitters Club Season 3 Release Date: When is it coming out?

‘The Ponysitters Club’ Season 2 premiered on November 16, 2018. Although some time has elapsed since then, Netflix has yet to announce what plans it has in store for the show. As of now, no renewal or cancellation announcement has been made and that puts us in a tight spot as we don’t know how well the show fared in terms of TV ratings and viewership.

That being said, we expect Netflix to renew the show for another season, considering the fact that the streaming service has been stepping up its offerings for kids. Our best guess is that if the show does get renewed, ‘The Ponysitters Club’ Season 3 can release sometime in November 2019. We will update this section as soon as we hear more.

While we wait for Netflix to make an announcement on the future of the show, here is the trailer for Season 2 to give you a glimpse into the show and the story thus far. If you haven’t seen the show yet head over to Netflix to catch all the episodes of the previous seasons.