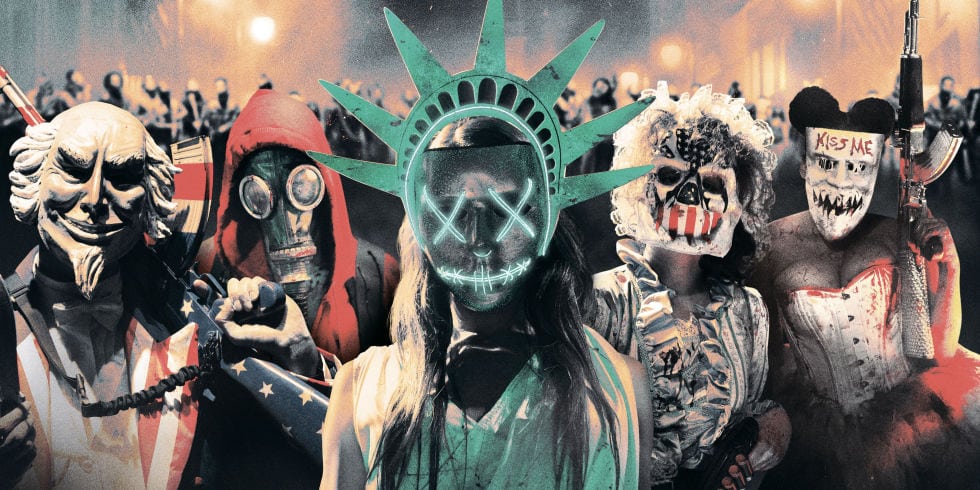 ‘The Purge’ is a TV adaptation of the horror movie franchise of the same name. James DeMonaco, who is the mind behind the film franchise, is the creator of the show as well. The show airs on the USA Network and first premiered on September 4, 2018. ‘The Purge’ has been produced by the same team of producers as the film series. The team consists of DeMonaco, Jason Blum, who has worked on films like ‘Whiplash‘ ‘BlacKkKlansman‘, and ‘Get Out‘, Michael Bay, who is best known for his ‘Transformers‘ movies, Brad Fuller, and Andrew Form.

The events of the show take place in the same universe as the films. The movies contained four installments. Fans flocked to the show expecting the same level of horror and thrill as was portrayed in the series of films. Although the series is based on a fresh, it did not sit too well with the critics who said the new premise was a bit boring and seemed bloated. Though, due to its unique concept, the first two seasons of the show have appealed to viewers. Now the question is: will there be a The Purge Season 3? Let’s find out.

The Purge Season 3 Release Date: When will it premiere?

As far as the next season goes, we don’t have an official announcement yet. Though considering the dwindling ratings, don’t be surprised if the network decides to pull the plug on the show. If the show does get renewed, ‘The Purge’ Season 3 can release sometime in October 2020. We will update this section as soon as we hear more.

The Purge Cast: Who is in it?

The cast of ‘The Purge’ is led by Gabriel Chavarria as Miguel and Jessica Garza as Penelope Guerrero. In the show, Miguel is the elder brother of Penelope. He is a US Marine who returns home on Purge night after getting a cryptic message from his sister. On the other hand, his sister is a member of a cult that pledges to be sacrificed. However, she finds her faith questioned when she is exposed to their realities.

Hannah Anderson appears as Jenna Betancourt, who starts off as an anti-Purge proponent but decides to go out on Purge night. When she confronts the violence, she is forced to introspect and face some deep and perhaps disturbing truths about herself as well as her marriage.

Joining the cast in season 2 is Derek Luke as Marcus Moore, a well-settled and dedicated family man; Max Martini as Ryan Grant; Paola Núñez as Esme Carmona; and Joel Allen as Ben Gardner.

Season 3, when it happens, is expected to see most of the lead cast reprising their previous roles — barring Max Martini and Paola Núñez, whose character arcs have ended in season 2.

The Purge Plot: What is it about?

‘The Purge’ is set against the backdrop of an altered America which is ruled by a totalitarian form of a political party. The series follows some characters who seem to be unrelated and living in the same city. As time goes by, each character is forced to reunite and come to terms with their past and discover just how far they will go and the things they will do to survive. The series takes place on Purge Night, but it is coupled with non-purge action.

We are shown a 12 hour period wherein all theft, vandalism, arson, murder, and various other crimes are made legal. In the dystopic anarchist setting, Miguel, the Marine, is seen searching for his sister, who has joined a death cult. Other characters have their own motives. Some are driven by revenge, while some see Purge night as an opportunity to raise capital for themselves.

However, everything goes awry when societal shackles are taken off. In the modern-day and age when there are often calls to eschew certain governments besides political practices that often edge on anarchism, ‘The Purge’ serves as a stark reminder about the depravity that humans are capable of and shows how an anarchist situation might actually play out. Overall, it also sets an interesting dichotomy between a totalitarian government which keeps baser human instincts in check, and all these repressed things come out when Purge night is declared.

Season 2 picks up the story from season 1 and follows the characters as they deal with the consequences after Purge night and get ready for the next Purge. Marcus teams up with his friends and delivers the needed medical attention to Michelle. Ben, who has already a lot of blood on his hands, is tossed outside by Marcus to allow Purge Night to finish the job.

However, toward the end, we discover that Ben is still alive and all set for another night packed with brutal, mindless slaughter. Esme and Ryan are both killed off by NFFA agents. Marcus’ son Darren and Esme’s ally Vivian receive a lump sum of heist money, donated by Ryan’s friends.

Purgeworld is now controlled by two diverse factions. The ones like Ben who think it’s their right to exercise their rights to violence and those like others who wish to expose the real truth behind Purge Night. Season 2, in fact, leaves off with an open end, setting up the stage to form an organized, informed, and well-funded uprising that would take down an oppressive regime. If season 3 closes off this arc, we would finally be satisfied that ‘The Purge’ does manage to close its story arcs in a fulfilling manner.

Here’s season 2 trailer. If you have not seen the series, we definitely recommend you give it a watch for the violent exposition of mayhem and sheer chaos that lies at the heart of human society.