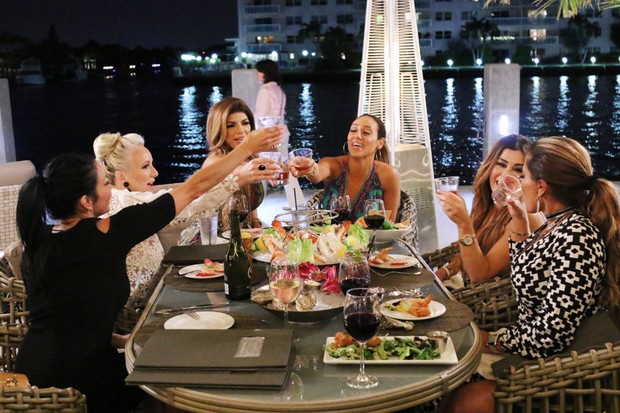 The Real Housewives of New Jersey is an American reality television series which revolves around the lives of four wildly rich home-makers who hail from New Jersey in the United States. The show first premiered on May 12, 2009, on Bravo Network. The show is a spin-off of the original The Real Housewives of Orange Country, which became so successful that it led to the formation of several spin-offs based in different cities like New York City, Dallas and Atlanta.

The Real Housewives of New Jersey Cast: Who is in it?

The Real Housewives of New Jersey comprises of an elaborate cast of which Teresa Giudice has remained throughout it’s all seasons. The original cast of the show included Giudice (she has four daughters with husband Giuseppe “Joe” Giudice), Caroline Manzo (she is married to Albert Manzo, but is not seen after the fifth season; Lauren is her daughter and Albie and Chris are her two sons), Danielle Staub (“friend of the housewives”), Jacqueline Laurita (She is married to Dina and Caroline’s brother Chris Laurita and returns in the series as a full-time housewife in the seventh season in 2016), Dina Manzo (she is married to Tommy Manzo, but is not seen after the seventh episode in the first season. She is again seen in the sixth season in 2014)

The Real Housewives of New Jersey Plot: What is it about?

Season 9 begins with Teresa planning to enter a bodybuilding competition. Only a few months are left for her husband Joe to be released from the prison. Melissa celebrates her birthday with the group. Teresa revisits the Gorga and Giudice argument. When all the ladies decide to travel to a cattle ranch in Oklahoma, Teresa and Melissa are seen holding grudges against each other. All the wives meet at Dolores’ hatchet-throwing party later where she gives a chance to all to take out their anger and frustration.

Teresa gets agitated when Melissa shares a family secret, and all the ladies decide to take Melissa’s side. She also argues with Joe Gorga over their father and everyone is shocked when they hear the surprising accusations she makes. Later on, Teresa, Margaret, and Melissa decide to hold a bachelorette party for Danielle. In the next episode, Melissa makes a shocking revelation to her sisters that they have a fourth sister. Margaret plans to host a brunch, but their morning turns into a battleground.

In the next episode, Margaret, Joe Gorga, and Teresa attend Danielle’s wedding, but tension arises when Teresa meets her brother. Melissa worries their family fights could ruin Danielle’s wedding day. Margaret is not able to handle the pressure of Danielle’s wedding demands which leads to huge chaos. Jackie talks with Dolores and tries to understand what is causing Teresa to be angry.

In the next episode, the quarrel between Jackie and Teresa goes out of hand at Joe’s communion. Jennifer becomes upset when she finds out that Jackie has written an article about her family. She decides to invite all the gang to the vineyard to improve their bond. Jackie gets an invitation as well, but she decides to use this situation as an advantage to lash out at Jackie for writing an article on her family. Later on, Teresa prepares to throw a party in Milania for a song release.

After preparing for a few months or so, Teresa’s fitness competition is scheduled to be held soon. The group travels to Coba, Mexico, but tension arises between Danielle and Margaret. As the Coba trip continues, Margaret puts false allegations on Jennifer, and all the ladies decide to side with Jennifer. Melissa tries to connect every piece of information to find out about her father. She discovers something extremely shocking. On the other hand, all the ladies are in the interest of persuading Teresa to remove Danielle from their friend circle. The drama goes on..

The Real Housewives of New Jersey Season 10 Release Date: When will it premiere?

Here’s the first look of The Real Housewives of New Jersey Season 10. If you haven’t seen the show yet head over to Prime Video to catch all the episodes of the previous seasons.