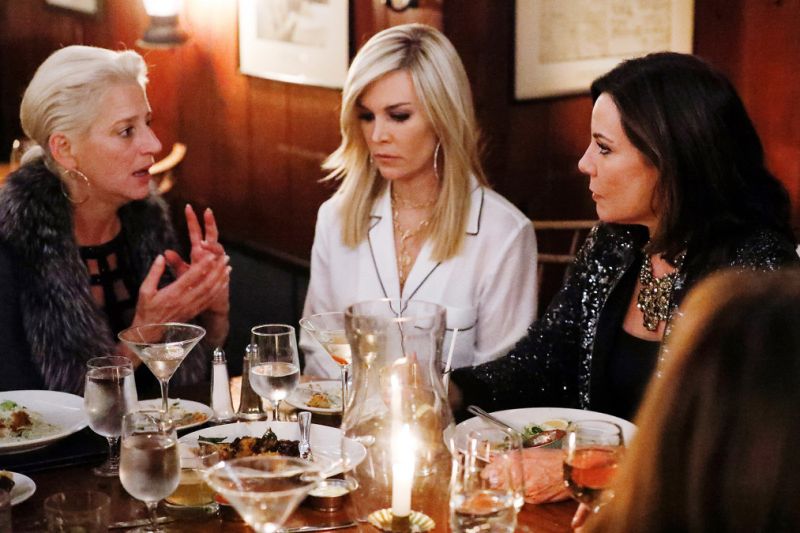 The 12th season of The Real Housewives of New York City premiered this Thursday and brought with it a slew of fresh new antics and drama. The season has some changes though. We won’t meet original cast member Bethenny Frankel since she has departed from the series. In her place, we are introduced to Leah McSweeney, the founder of the women’s apparel brand, Married to the Mob.

Joining Leah are returning stars Luann de Lesseps, Ramona Singer, Sonja Morgan, Dorinda Medley, and Tinsley Mortimer. Yes, we are all back to the familiar NY groove and the ladies are bound to keep us entertained for the next several weeks. Now, in order to ensure that you are all caught up with the latest shenanigans, we bring you the details of the upcoming episode, i.e ‘The Real Housewives of New York City’ Season 12 Episode 2.

When is The Real Housewives of New York City Season 12 Episode 2 Release Date?

Titled, “Stooping to a Lower Level”, Bravo describes the episode as follows: “In the city, Tinsley defends herself to Sonja and Leah over her continuing feud with Dorinda; to celebrate the end of summer the ladies head out to Ramona’s house in the Hamptons for a long weekend; Tinsley’s flu leaves her voiceless.”

Where to Stream The Real Housewives of New York City Season 12 Episode 2 Online?

The premiere episode begins with the ladies reacting to Bethany’s departure as they receive the news on their phones. While Sonja expresses that she feels abandoned, Dorinda tells that she wants to cry. Ramona, on the other hand, tells that everyone can now be a bit free as they did not know how to react when Bethany was around. Luann adds her opinion as well. She says: “Like they say on Broadway, the show must go on … without you.”

Luann’s probation after her arrest is over and she teams up with Sonja to visit 100 Centre Street. The two have a heart-to-heart talk, settle their differences, and reconcile. Tinsley meets Leah at her boxing gym while being accompanied by her trainer Martin. Dorinda is suffering from a broken rib and Sonja is dejected that her daughter has been transferred to UPenn School. Ramona laments about her single life and then, we meet Elyse (new friend in season 12). There’s a party at Dorinda’s and Leah is seen to be fitting in nicely.

However, a fight soon breaks out between Dorinda and Tinsley. According to the former, Tinsley withholds information and they don’t really know anything about her. Tinsley finally leaves the party and luckily, on her way out, happens to meet Skott!

Read More: Where is ‘The Real Housewives of New York City’ Shot?