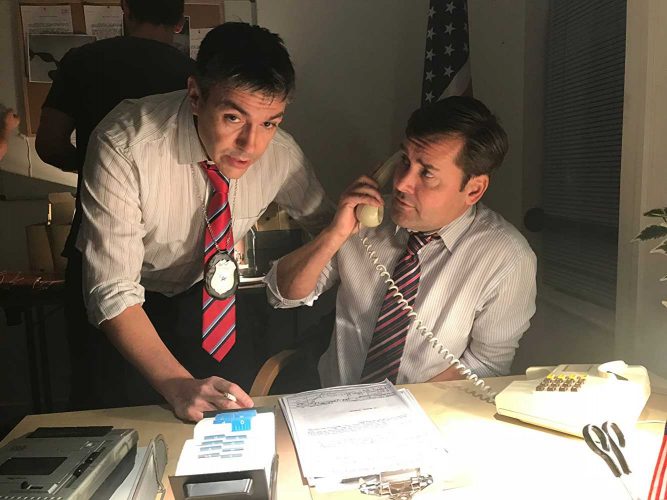 ‘The Real Story Of…’ is an American documentary series that airs on Reelz. It first premiered in 2016 and quickly managed to attract a niche audience. The show falls into a rare category where docu-series reflects on a pop-culture aimed at a casual audience without watering-down of its content. It also satiates the interest of any movie buff, with a fresh investigative look into the stories that gyrate around certain cult films and Hollywood legends.

A casualized form of investigative journalism had emerged to cater to an audience that seeks a lightweight informative aspect with the traditional primetime slot of entertainment even before the 2000s, and to this date, the genre has not really evolved much at its core. The chief difference of the Discovery subsidiary ID of today and its equivalent earlier networks dedicated towards docu-series on popular topics is mostly the widespread development of cinematography and flashy modern post-production in TV filming.

The Real Story Of… Cast: Who is in it?

Unlike the usual textbook docuseries that feature a host with a lot of screen time to regulate the episodes and make the bits of information accessible for a casual watch, ‘The Real Story Of…’ does away with the trope of a narrator’s screen presence. In the situations that it emulates and enacts, there is no scope for actors to appear recurrently in all episodes, let alone an ensemble cast.

The cast is almost impossible to predict, and the actors and actresses in these are selected from a pool of actors who only appear in minor roles in both scripted and unscripted TV. That said, David Galea, the actor playing Henry Hill in the show’s take on Martin Scorsese’s ‘Goodfellas‘ and the story behind it, also Thomas Doss in the ‘Hacksaw Ridge‘ episode, as well as Ash Holmes have recurred, and might come back in potentially major roles in the upcoming season. We also hope to see new characters as they play out the real stories behind more of the popular movies that have gone on to shape the history of cinema as we know it today.

The Real Story Of… Plot: What is it about?

The basic plot of ‘The Real Story Of…’ is a detailed examination of the truth that lies beneath Hollywood films that apparently seek to tell the true stories through the medium of film.

Each episode of ‘The Real Story Of…’ takes up critically acclaimed films with a gripping production backstory hanging behind them and/or films which enjoy a cult status in the industry, in an attempt to piece together the puzzle of these Hollywood legends. To put it simply, the show is a myth buster of sorts that targets these famous films through the decades – be it the turn-of-the-century mob gangster film ‘Donnie Brasco’ (1997) that paved the way for Johnny Depp’s career in the genre, which was covered in the 2016 pilot of the show, or Scorsese’s esteemed classic ‘Goodfellas’ (1990).

What basically stands out about the show is the degree of research that goes into uncovering the truth behind the seemingly true narratives that we see on screen. Naturally, it is not the intention of directors to deceive us and to levy such a charge against someone like Martin Scorsese who, having grown up in Little Italy, was more than familiar with how the mob worked and inculcated this degree of realism in his movies.

However, directors do tend to take creative licenses while interpreting a story and turning it into a movie. This is exactly the case for most movies, and this is where ‘The Real Story Of…’ comes in. It does not seek to be creative, instead, choosing to just depict the story as is, juxtaposing how the story played out differently in certain bits from the films we have come to love. Thus, the series is not just indispensable for film enthusiasts, but it is a great watch for lovers of history as well. Moreover, due to the content they offer, there are various investigations which will appeal to a wide range of audiences. The series has to research into mob history, the history of wars, and maybe we might even see supernatural investigations if the show branches out to include some of the recent horror movies which are based on true events.

Since Hollywood still holds a vast repository of cult classics and anecdotes and legends surrounding them, we can expect more enlightening episodes in a new season that is sure to engage all film enthusiasts.

The Real Story Of… Season 5 Release Date: When will it premiere?

‘The Real Story Of…’ Season 4 premiered on February 1, 2019. While there has been no news about Reelz renewing or canceling the show yet, one should be fairly certain of the series continuing on the network. This is primarily because it has a large fan following among lovers of cinema, and history aficionados. Moreover, there are plenty of films whose backstories have not yet been investigated on this show. With no dearth of the source material and strong fan support, there is a great chance of the series being renewed. If and when the show gets renewed, ‘The Real Story Of…’ Season 5 should release sometime in February, 2020. We will update this section as soon as we hear more.

The Real Story Of… Trailer:

While we wait for it to come out, you can check out this video here, to refresh your memory about the show. Also, head over to Reelz to catch the show if you have not seen it before. It is thoroughly entertaining and informative.