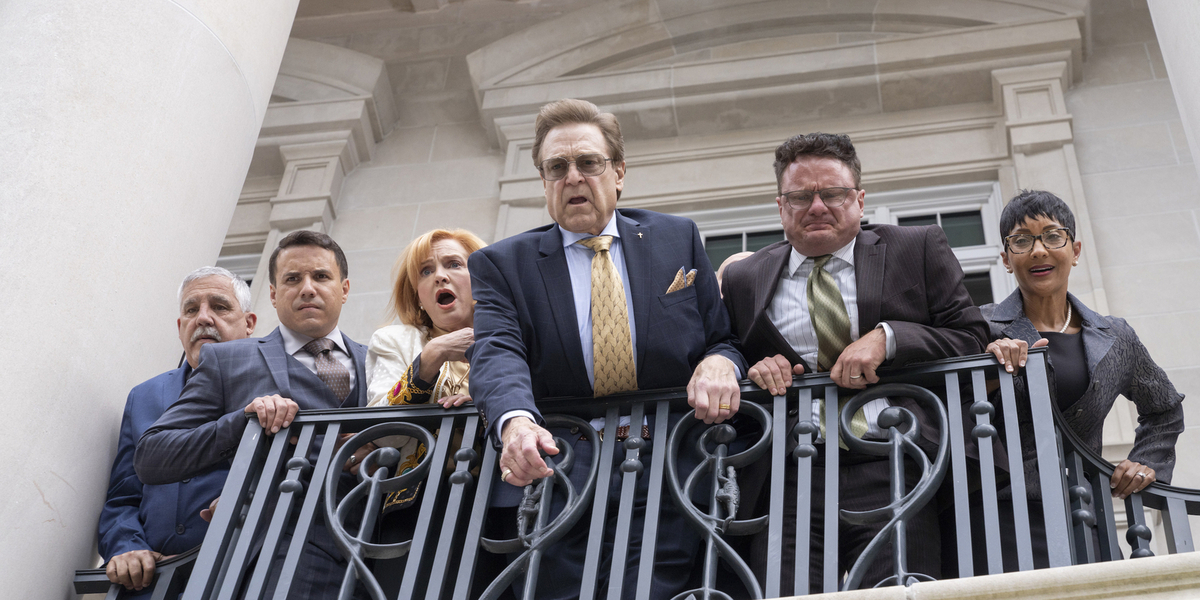 Created by Danny McBride, ‘The Righteous Gemstone’ is a black comedy series on HBO that packs a star-studded cast ensemble relentless force to sway the audiences. The story revolves around the titular Gemstones and their family-run Televangelist megachurch. The family includes patriarch Eli and children Jesse, Judy, and Kelvin Gemstone. While Judy feels stifled in the family among her two brothers, arrogant Jesse and his “gang” live a gloriously scandalous life amidst private parties, baptisms, and fundraisers.

The series garnered a positive critical reaction thanks to its passionate comic ambiance, production value, and lively performances by John Goodman and others. In the finale of the first season, Billy gets his due when Eli drives him out of the church, and in a parallel development, Amber sends Jesse out to join their son in Haiti. The second season is already knocking at the church doors. Watch out for spoilers in the designated section, but let us first reveal the premiere date of ‘The Righteous Gemstone’ season 2.

‘The Righteous Gemstones’ season 2 episode 1 is set to release on January 9, 2022, at 10 pm ET, on HBO. The second season is kicking off with a double episode premiere as the second episode will air soon after the first. Following that, new installments of season 2 will release weekly on Sundays. Typically, the episodes have a running time of 33-60 minutes each.

Where To Stream The Righteous Gemstones Season 2 Episode 1 Online?

You may catch season 2 episode 1 on HBO at the date and time mentioned above. However, if you have skipped the broadcast window, fret not, since the show is available on HBO Max and Hulu. Moreover, you can catch the action in live TV options such as DirecTV, Xfinity Stream, and YouTube TV. The episode is also available for on-demand streaming on Amazon Prime Video, Google Play, Vudu, Microsoft Store, and iTunes.

The first episode of the second season is loftily titled ‘I Speak in the Tongues of Men and Angels,’ retaining the over-the-top nature of the show. The episode will see Jesse back from Haiti and ready to take on God’s work. He will take his chances on a business endeavor with West Coast Televangelist Lyle Lissons and his wife. The power couple will also be interested in doing business with Jesse. So, they will attempt to convince him to invest top dollars in their Christian resort, Zion’s Landing.

But the Televangelist community will receive a significant blow when a fellow preacher becomes subject to a fierce media crackdown. On the other hand, Eli has come a long way since the beginning of the series. Following his epiphany in the first season’s finale, Eli will get back in touch with Junior, a mysterious figure tied to his past. The episode will slowly reveal that Junior is the brother of Eli and an uncle to Judy, Jesse, and Kelvin. The beginning of the season will set us right up for more roving madness to come, and we can’t be more elated!

Almost all central cast members will be back for the second season. At the same time, you should root for a few pleasant surprises. Danny McBride, the creator of the series, plays the prominent role of Jesse Gemstone, and he will be back for the second haul. Also retaining their roles are John Goodman (Eli Gemstone), Edi Patterson (Judy Gemstone), and Adam Devine (Kelvin Gemstone).

Other prominent members of the cast include Cassidy Freeman (Amber Gemstone), Tony Cavalero (Keefe Chambers), Tim Baltz (BJ), Skyler Gisondo (Gideon Gemstone), and Greg Alan Williams (Martin Imari). Furthermore, the second season will introduce Eric Roberts in the garb of Junior Gemstone (Eli’s estranged brother), Eric André as Lyle Lissons, a popular televangelist, and Jessica Lowe as Lindy Lissons, Lyle’s wife. Moreover, veteran star Jason Schwartzman will be seen in the recurring role of Thaniel, an investigative reporter interested in the history of the Gemstone family. You may have seen Schwartzman in several Wes Anderson movies, from ‘Rushmore’ to ‘The French Dispatch.’

Read More: Where Is The Righteous Gemstones Filmed?