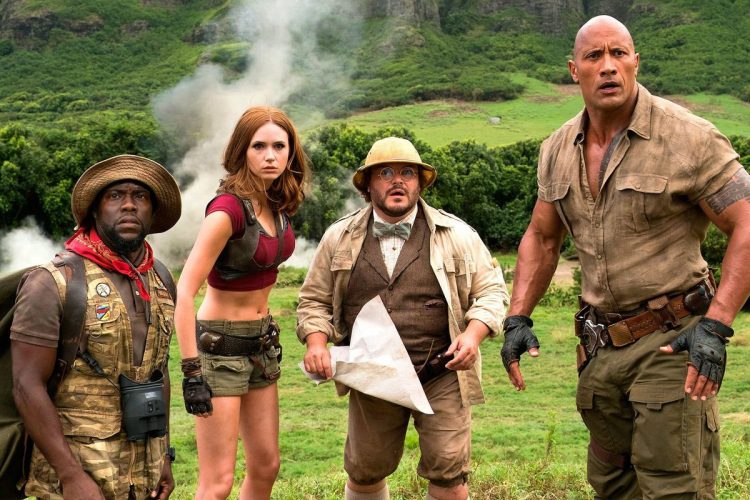 ‘Jumanji 3’ that is the sequel to ‘Jumanji: Welcome to the Jungle‘ is currently in the process of being produced. The cast members have posted various behind the scenes shots on social media, leading interested fans to believe that they are all having a great time. One of these includes Karen Gillian, known for playing Nebula in the Marvel Cinematic Universe, and playing Ruby Roundhouse in ‘Jumanji: Welcome to the Jungle’, posting a hilarious video of co-star Jack Black singing in his sleep. Now, one of the most famous cast members of the film, Dwayne ‘The Rock’ Johnson, has posted a picture of himself with Karen Gillian. He claims the picture offers a new and ‘awkward’ look at the two. You can check out the picture here.

As you can see, the picture shows both Johnson and Gillian who look like they are rocking some new costumes and appear to be “two extremely awkward teenagers in love” as Johnson described in his post. Johnson went on to write in the post, “hoot our new #JUMANJI with my partner in crime @karengillanofficial and if we look like two extremely awkward teenagers in love while trying to manage our insane superpowers in our JUMANJI universe – that’s because we are,” he wrote. “Absolutely love working and getting absurdly awkward with this gal. #RubyRoundhouse aka #KillerOFMen #DrSmolderBravestone #AwkwardTeenLove #JUMANJI THIS CHRISTMAS!”. For those unaware, the plot of the film follows four children who get stuck in a video game called ‘Jumanji’ and discover that they can play as characters who have their own skill sets. During the course of their exciting adventures Spencer who plays the game as Dr. Smolder Bravestone, that is, Dwayne Johnson’s character falls in love with Martha who plays the game as Ruby Roundhouse, Karen Gillian’s character.

In the sequel to ‘Jumanji: Welcome to the Jungle’, the original quartet will be seen reprising their roles. The talented cast will be bolstered by the presence of Awkwafina of ‘Crazy Rich Asians‘ fame, Danny DeVito of ‘It’s Always Sunny in Philadelphia’ and Danny Glover of ‘Lethal Weapon’ fame. Dwayne Johnson spoke to The Hollywood Reporter about the stunning cast, saying, “From Awkwafina to Danny DeVito to now one of my action heroes, Danny Glover — it’s been awesome having so many actors and OG legends raise their hands wanting to come and play in our Jumanji universe. ‘Who turns into who?’ will always be the fun magic sauce for our audience”.

As of now, not much is known about the plot of the upcoming film. However, it goes without saying that ‘Jumanji: Welcome to the Jungle’ was a huge hit among fans. Although the franchise had a hiatus since 1995, the 2017 film managed to make a killing at the box office. The movie made $40 million domestically and $557 million in international markets, which totaled to $962 million while the reported budget of the film was $90 million.

The sequel to ‘Jumanji: Welcome to the Jungle’ will also be directed by Jake Kasdan and will be based on a script by Jeff Pinkner and Scott Rosenberg. ‘Jumanji 3’ is out in theaters on December 13, 2019.