Where to Stream The Secret Life of Pets 2? 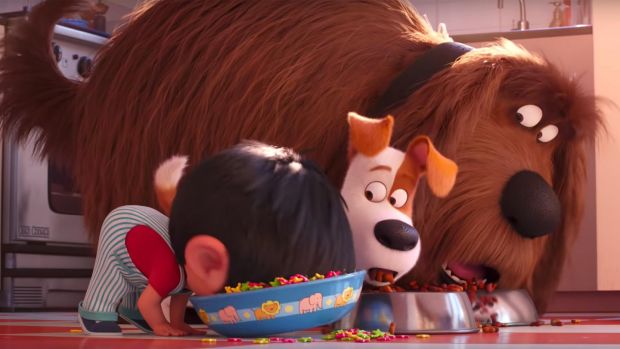 It’s forgone conclusion now that Disney dominates the animation box office, with occasional brilliant gems coming from Pixar.  Rarely do we see anything noteworthy from other production houses. This is what makes ‘The Secret Life of Pets 2‘ so refreshing. Produced by Illumination, this computer-animated comedy is a sequel to ‘The Secret Life of Pets’ and picks up where the previous film left off.

The second film doubles up on the fun and adventure as we see our favorite pets return, and embark on a new journey with exciting opportunities and important lessons. Although the film has received mixed reviews, it has been, more or less, a commercial success.

What is The Secret Life of Pets 2 About?

‘The Secret Life of Pets 2’ picks up where the previous film left off. We see the owner of Max (voiced by Patton Oswalt) and Duke (voiced by Eric Stonestreet), Katie, get married. She has a child of her own, Liam, and though Max initially feels uncomfortable around Liam, he later grows close to the kid, and even develops an itch thinking about how dangerous the outside world might be for Liam.

Things change when the family goes for a trip. Max and Duke arrive on a farm and find themselves in a strange new lifestyle since they do not know how to behave on a farm. Moreover, the farm’s sheepdog, Rooster, is also an unfamiliar entity. However, Rooster and Max bond and Rooster even helps boost Max’s confidence as they team up to find a missing sheep. Meanwhile, before Max had left, he had given his favorite toy, Busy Bee to Gidget. Gidget promptly manages to lose Busy Bee in an apartment filled with cats and inhabited by a cat lady. However, using the tricks of how to be a cat, taught by Chloe (voiced by Lake Bell), Gidget breaks in, and strangely enough, gets hailed as the ‘queen of cats’ by the residents of the apartment.

A parallel story begins to unfold as Chloe and Snowball (voiced by Kevin Hart) meet Daisy (voiced by Tiffany Haddish). Daisy explains that she needs Captain Snowball, that is, Snowball’s superhero persona, in order to rescue a white tiger from the clutches of an abusive circus owner, Sergei. They do manage to sneak in and try and rescue the tiger but run into difficulty from Sergei’s wolves, and in the heat of escape, Daisy drops her flower clip, which the wolves use to track her down. Meanwhile, this group seeks temporary refuge at Pops’, before going to Max’s. Around the same time, Duke and Max get back from their farm trip. Sergei and his wolves track down Daisy and recapture the tiger.

However, the pets are united and won’t let another animal be taken captive. They rescue the tiger with a little help from Gidget and her new cat friends. They battle Sergei’s monkey and Sergei’s wolves. Eventually, Sergei is also suppressed by the animals, and they get a ride back home from Gidget, who had managed to get the cat lady’s car. Everything goes back to normal and we see Liam go to preschool, as Max’s family says their goodbyes to the growing kid.

It remains to be seen what adventure lies in store for our pets in the next movie, and if Liam will be a part of it. For now, let us tell you where to watch ‘The Secret Life of Pets 2’.

Is The Secret Life of Pets 2 on Netflix?

Netflix has an amazing library when it comes to films and television shows. The premier content provider has something for everyone, and thus their animated content is also rather extensive. While ‘The Secret Life of Pets 2’ is not on Netflix, you can still enjoy an animated show about animals on an adventure, by checking out ‘Madagascar: Escape 2 Africa‘ and ‘Bolt‘.

Is The Secret Life of Pets 2 on Hulu?

Hulu has a quickly growing library and the platform has a tendency to make smart additions, so as to cater to their expanding viewer base. While ‘The Secret Life of Pets 2’ is not on the platform if you want a movie where animated animals talk and go on an adventure, be sure to check out ‘Shrek‘.

Is The Secret Life of Pets 2 on Amazon Prime?

Amazon Prime has a library that can give any platform a run for its money, and it has easily established itself as a top competitor to Netflix in terms of content. While ‘The Secret Life of Pets 2’ is not on Amazon Prime, you can kick back and enjoy ‘Hotel for Dogs‘ for some light-hearted fun.

Where Can I Stream The Secret Life of Pets 2?

Unfortunately, until ‘The Secret Life of Pets’ arrives at one of the major platforms, it is unlikely that it will be available for streaming elsewhere. It would be best if you remained a little patient since it has not been too long since the movie came out.

When will The Secret Life of Pets 2 be Available on DVD and BluRay?

‘The Secret Life of Pets 2’ is not out on DVD or BluRay yet. It is scheduled to come out on August 27, 2019. However, it is understandable if you cannot wait that long. In that case, you can head here and preorder your copy of the movie today.

Can I Watch The Secret Life of Pets 2 Online For Free?

Unfortunately, ‘The Secret Life of Pets 2’ is still not done with its theatrical run, so it will be difficult to watch it online for free via legal means. We suggest you hold on until it comes to one of the streaming platforms, where you can use the free trial period to watch the movie.

Alternately, you can pay for the art you consume, and head to a theater near you that is still playing ‘The Secret Life of Pets 2’ and check it out there.