The Seven Deadly Sins Season 5 Episode 14: What to Expect?

Based on a manga series written and illustrated by Nakaba Suzuki, ‘The Seven Deadly Sins’ or ‘Nanatsu no Taizai’ is a high-fantasy anime series that has gained a worldwide audience for its immersive storyline and well-developed magic system. At the start of the story, Princess Elizabeth Liones sets out to find the legendary group of knights known as the Seven Deadly Sins. During her journey, she encounters a barkeep, who turns out to be Meliodas, the Sin of Wrath and the leader of the Sins. With his help, she seeks out the rest. She eventually discovers that she is the reincarnation of goddess Elizabeth and her and Meliodas’ fates are intricately tied together due to ancient curses and a forbidden romance.

‘The Seven Deadly Sins’ season 5 episode 14, titled ‘Farewell, Seven Deadly Sins,’ is set to release on April 14, 2021, on TV Tokyo and BS TV Tokyo. Studio DEEN, the anime’s current producer, worked together on the 5th season with the Korean animation studio, Marvy Jack. Susumu Nishizawa directed the episodes, with Rintarō Ikeda serving as the main scriptwriter. Hiroyuki Sawano, Kohta Yamamoto, and Takafumi Wada provided the music. The first 12 episodes have Akihito Okano’s “Light That” as the opening theme and SawanoHiroyuki[nZk]:ReoNa’s “Time.” The rest of the episodes have Sora Amamiya’s “Eien no Aria” as the opening theme and UVERworld’s “NAMELY” as the ending theme.

In Episode 13, Meliodas has an emotional reunion with Elizabeth and the rest of the Seven Deadly Sins. An exhausted Ludociel lies in the arms of his brother and confesses that he has grown tired of the senseless war between the goddess and demon clans. He observes that it is not likely over even if the Demon King is dead. Elizabeth tells him that she wishes for him to find peace before Ludociel becomes fragments of pure white orbs and ascends toward the sky. Meanwhile, the demons stop fighting and retreat. 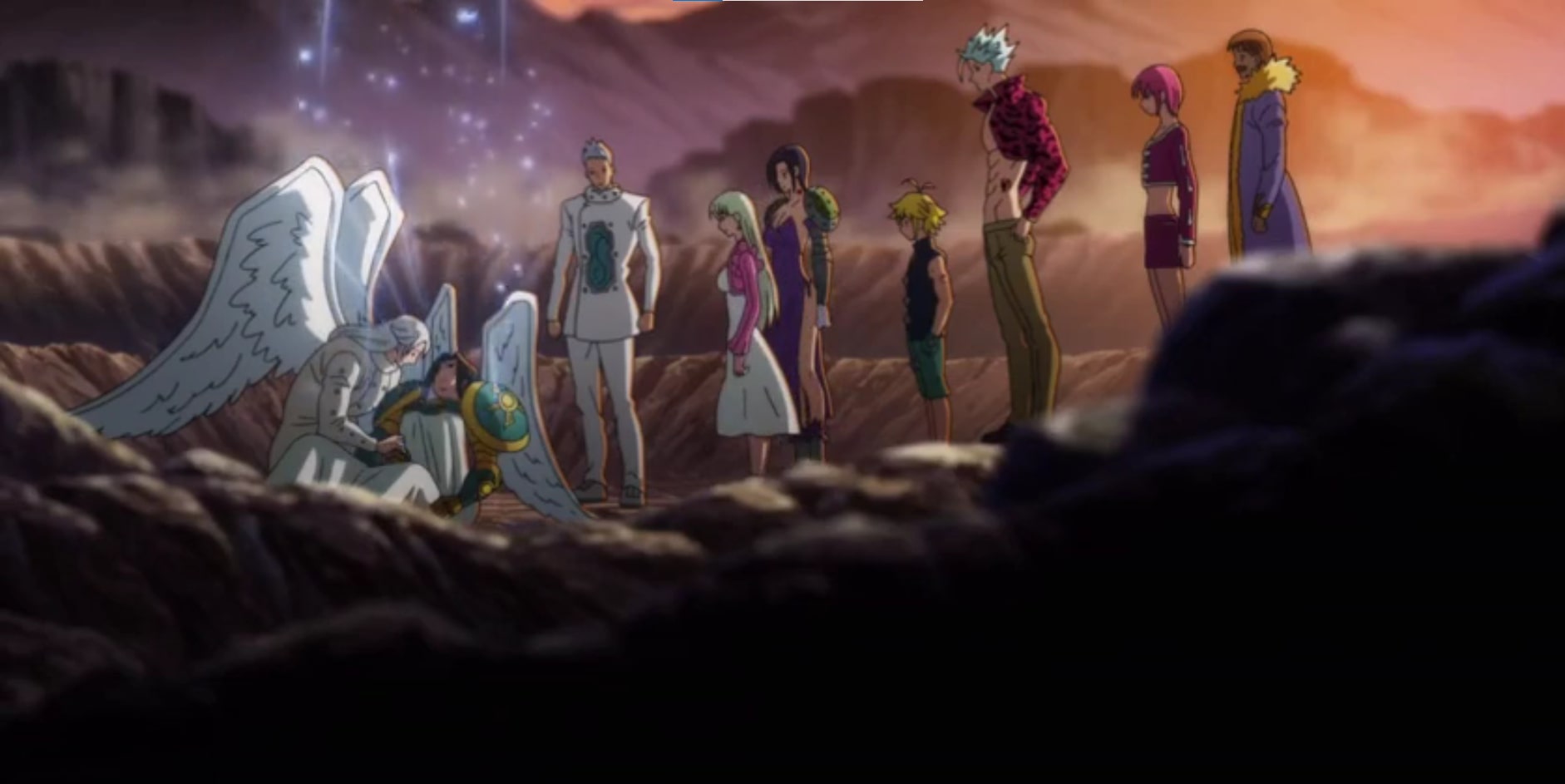 After Merlin manifests Meliodas and Elizabeth’s curses, the everlasting life and eternal reincarnations respectively, into their physical forms with Curse Discovery, Meliodas seemingly destroys them with his original power.  Before returning to the Liones with the others, Elizabeth and the Sins make a detour, and Meliodas frees Gelda, keeping his promise to his younger brother, who seems to have gone missing since his fight with the Demon King. Gelda leaves, vowing to find her lover no matter where he is. 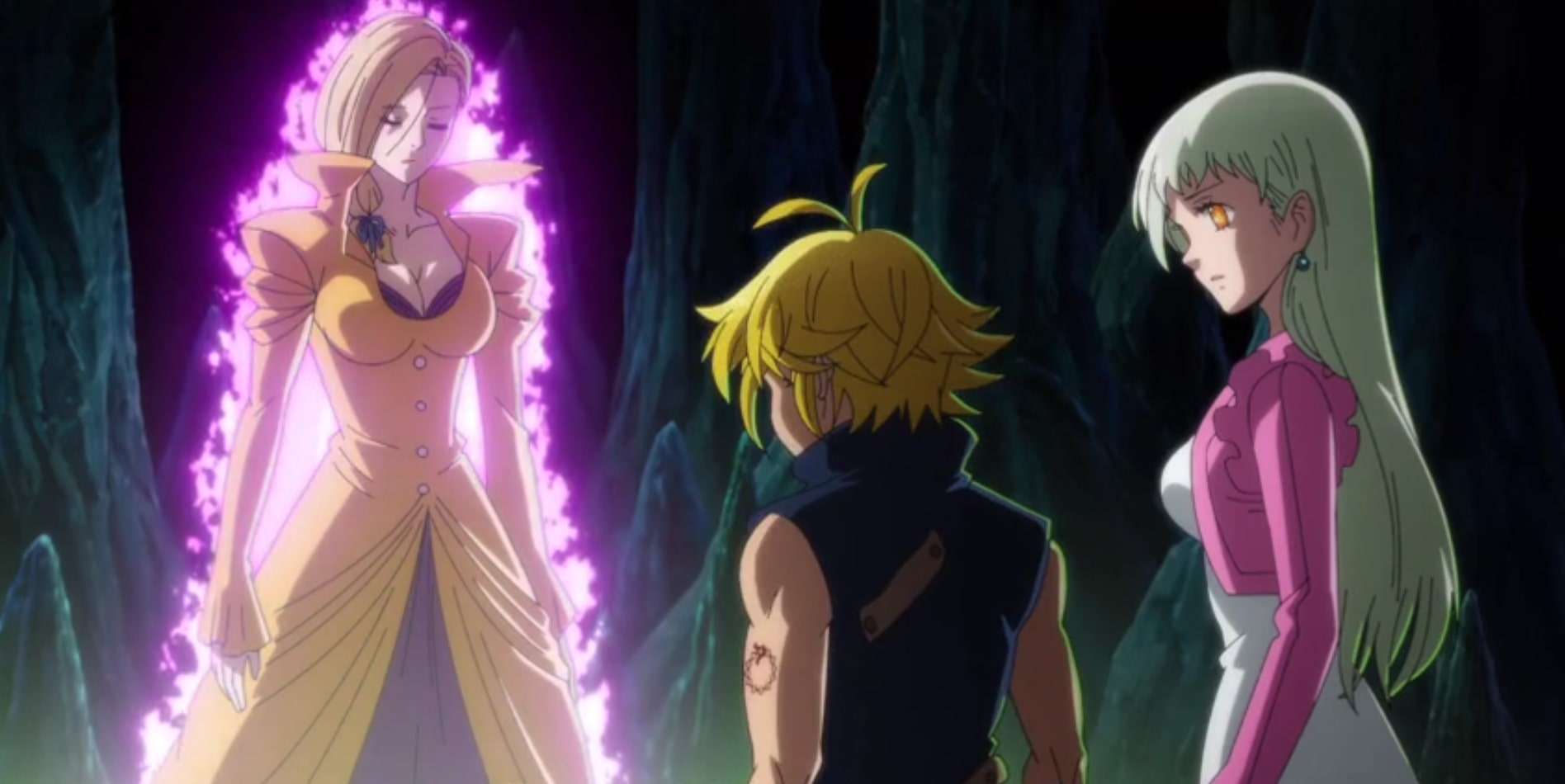 As friends and lovers reunite in Liones, Ban and Meliodas sing Wild’s lullaby to Hawk. In the post-credits scene, at Boar Hat’s rooftop, Ban asks Meliodas how much time Meliodas has left, making the latter realize that Ban knows about his imminent departure.

In episode 14, it might be revealed to Elizabeth and the other Sins that Meliodas has to return to the Demon Realm. Elizabeth might decide to accompany him. Meliodas might get to say a proper farewell to his comrades this time. He might find out that Elizabeth’s curse has been restored because the Demon King has found a new vessel in his brother. Meliodas and Elizabeth might set out on another adventure to rescue Zeldris.