The Seven Deadly Sins Season 5 Episode 20: What to Expect?

Based on the original Japanese manga series written and illustrated by Nakaba Suzuki, ‘The Seven Deadly Sins’ is a high-fantasy anime. The story begins when Princess Elizabeth Lioness embarks on a journey to find the eponymous group of knights and convince them to help free her kingdom from the corrupt Holy Knights. She first meets their leader, Meliodas, and later is introduced to the others one by one. She eventually discovers that her and Meliodas’ fates are perpetually tied because of ancient curses placed on them.

‘The Seven Deadly Sins’ season 5 episode 20, titled ‘Mortal Enemies,’ is set to release on May 26, 2021, on TV Tokyo and BS TV Tokyo. The anime’s current producer, Studio DEEN, worked together on the 5th season with the Korean animation studio, Marvy Jack. Susumu Nishizawa directed the episodes, with Rintarō Ikeda serving as the main scriptwriter. Hiroyuki Sawano, Kohta Yamamoto, and Takafumi Wada provided the music. The first 12 episodes have Akihito Okano’s “Light That” as the opening theme and SawanoHiroyuki[nZk]:ReoNa’s “Time.” The rest of the episodes have Sora Amamiya’s “Eien no Aria” as the opening theme and UVERworld’s “NAMELY” as the ending theme.

In episode 19, Escanor continues to fight the Demon King by himself with the power of Ultimate Sunshine and even gains the upper hand. But then the Demon King frees himself from his grasp. As his friends step in to help, Escanor declares that this is his fight alone. But then Meliodas confronts Escanor, making him recall why Meliodas allowed him to join the Sins. As the Demon King creates a colossal monster of darkness, Escanor tells the others that he has always wanted to sacrifice his life for them. As he jumps towards the monster, all the other Sins join him. Meliodas tells him if he wants to endanger his life for them, it is only fair that they endanger their lives for him. 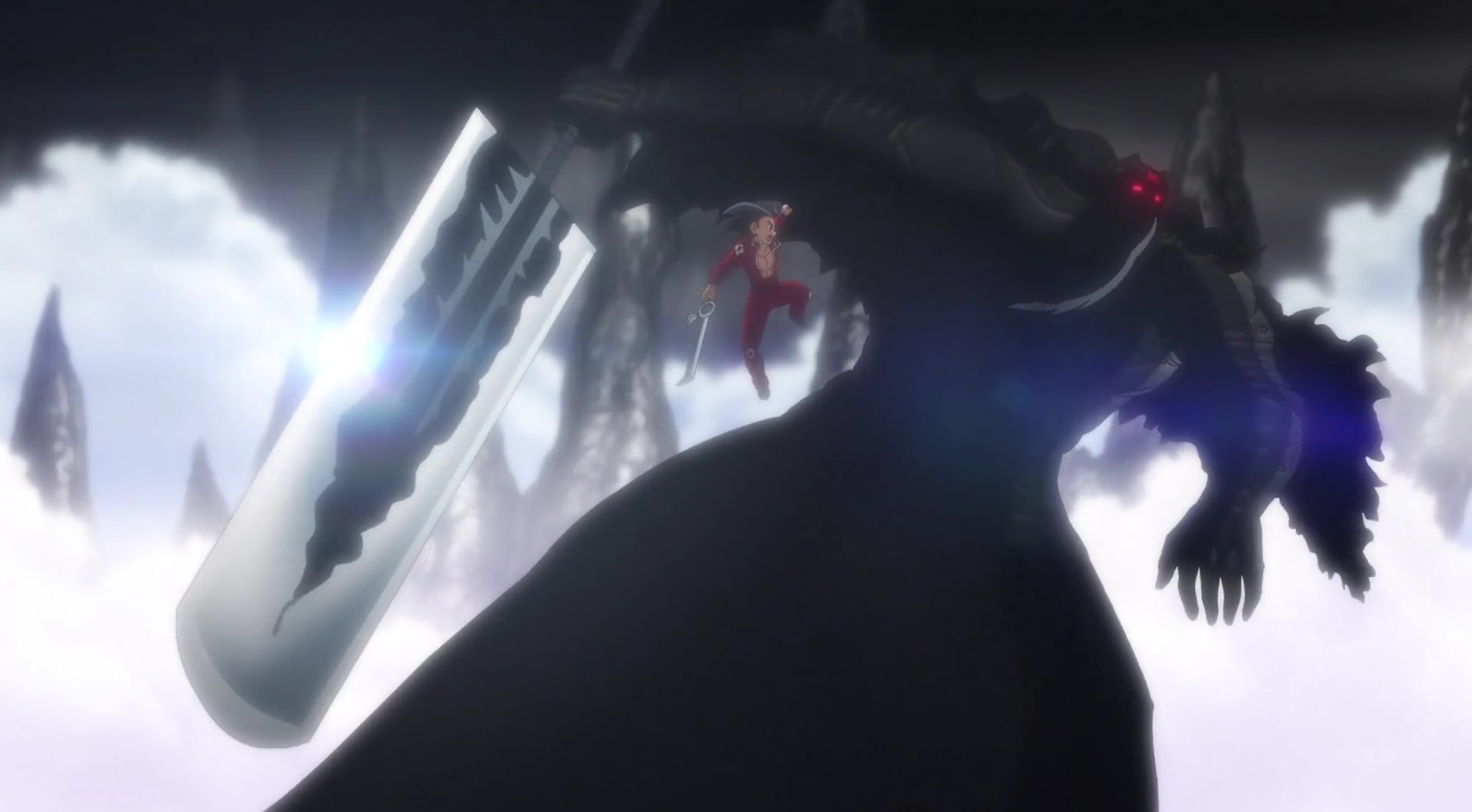 Meanwhile, Zeldris easily sees through his father’s ruse in the spirit realm and declares that he trusts his older brother. The Demon King laments that it pains him that he has to kill his beloved son. Zeldris rejects the notion, knowing full well that his father never loved him. Eventually, he forces the Demon King out of his body.

In the real world, a brief emotional reunion happens between Meliodas and Zeldris. The Commandments split and fall all over Britannia. A horrified Merlin explains that as both Meliodas and Zeldris have rejected him, the Demon King wants to turn the entire Britannia into his vessel. In episode 20, the Sins will likely continue fighting against the Demon King, who might cast Death Zero, stupefying the Sins with gravity magic. Merlin subsequently might cast Limit Breaker, which will enable the Sins to use all their powers.