The Seven Deadly Sins Season 5 Episode 22: What to Expect?

Based on the original Japanese manga series written and illustrated by Nakaba Suzuki, ‘The Seven Deadly Sins’ is a high-fantasy anime. It follows the grand adventures of the eponymous group of knights who return to the Kingdom of Liones to save it from the Holy Knights. It is revealed that their leader, Meliodas, has a long history with Princess Elizabeth Liones that goes back thousands of years. Season 5 (season 4, according to non-Netflix counts, as season 2 or ‘Signs of Holy War’ is considered a 4-episode-long special), also known as ‘The Seven Deadly Sins: Dragon’s Judgement,’ premiered on January 13, 2021. Here is everything you need to know about its upcoming episode.

‘The Seven Deadly Sins’ season 5 episode 22, titled ‘A Taste of Chaos,’ is set to release on June 9, 2021, on TV Tokyo and BS TV Tokyo. The anime’s current producer, Studio DEEN, worked together on the 5th season with the Korean animation studio, Marvy Jack. Susumu Nishizawa directed the episodes, with Rintarō Ikeda serving as the main scriptwriter. Hiroyuki Sawano, Kohta Yamamoto, and Takafumi Wada provided the music. The first 12 episodes have Akihito Okano’s “Light That” as the opening theme and SawanoHiroyuki[nZk]:ReoNa’s “Time.” The rest of the episodes have Sora Amamiya’s “Eien no Aria” as the opening theme and UVERworld’s “NAMELY” as the ending theme.

In episode 21, as Gil, Howzer, and Griamore celebrate the end of the Holy War, Vivian arrives out of nowhere and cryptically says, “When the balance between light and darkness crumbles, chaos follows.” She later reveals that she has often heard Merlin say it. Meanwhile, the Sins enjoy the celebrations. Elizabeth asks Merlin if the latter wants the burn wound to be removed from her skin. In response, Merlin asks if it’s ugly. Elizabeth replies that it’s beautiful. The Sins then speak about their wishes. When Merlin’s time comes, she takes her comrades to the magic lake and brings out Arthur’s body from the Boar Hat, intending to resurrect him. 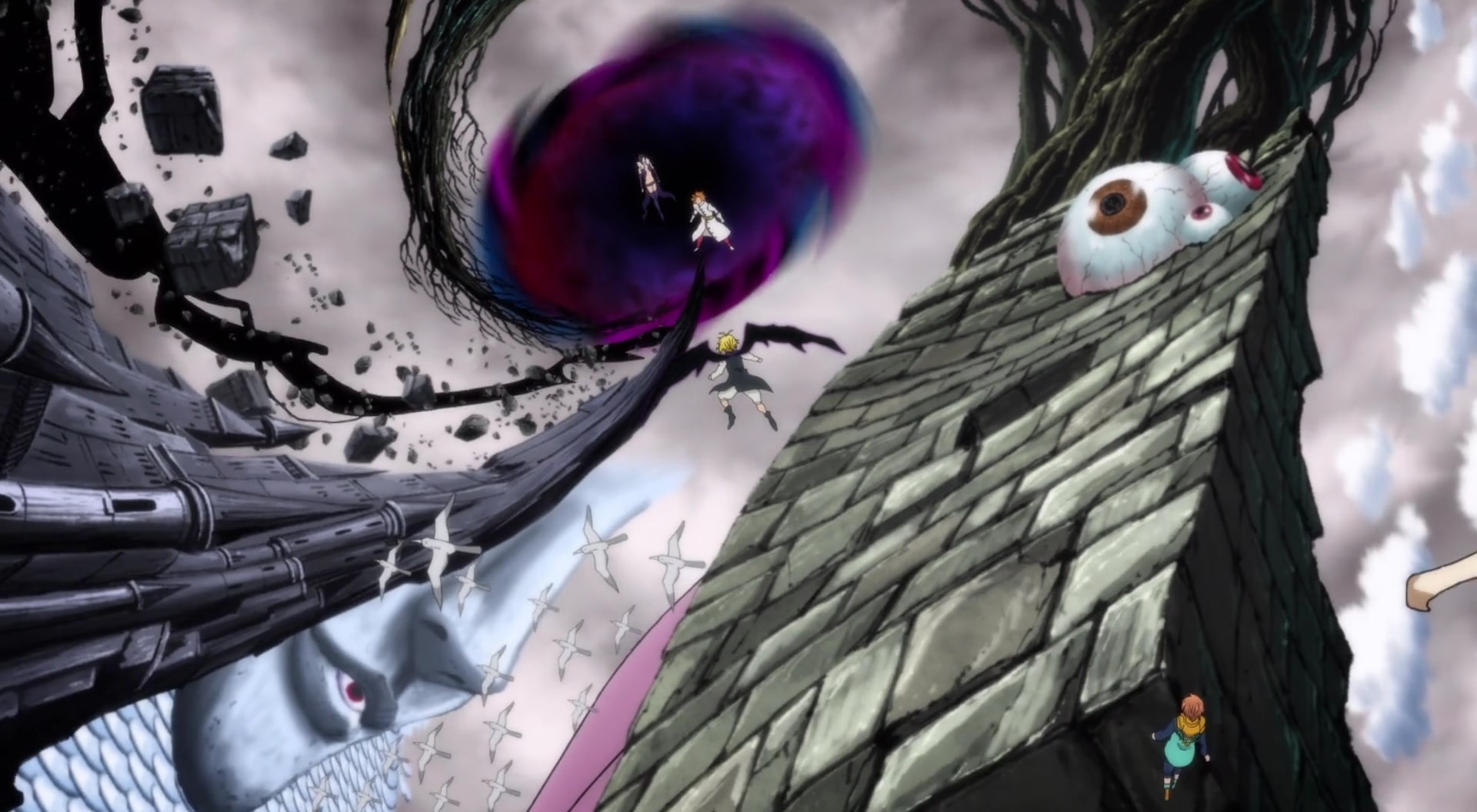 The spell seems to work. Excalibur, which was impaling Arthur’s body, vanishes, and Arthur wakes up. Merlin observes that of all the races, humans are capable of most contradictions and contradictions invite chaos. She also declares that only a priestess of chaos can choose the ruler of chaos. And evidently, she has chosen Arthur. She implores Arthur to embrace the magic within him and become what he was always meant to be. The chaos magic suddenly takes hold of Arthur and unleashes an absurd world. Ultimately, with Merlin’s help, Arthur brings his new magic under control.

The Princess of the Lake tells the Sins about Merlin’s past. After she met Meliodas, she was romantically drawn to him, but her feelings were never reciprocated. Then Meliodas met Elizabeth, and that was the end of her romantic aspirations. She subsequently devoted herself to gathering knowledge. She learned that chaos created the Supreme Deity, Demon King, and World Tree. However, the Supreme Deity and Demon King locked Chaos away. The Princess of the Lake reveals that Merlin has made her life’s mission to free Chaos. In episode 22, Merlin’s plan will likely be further revealed. It is possible that she helped create the Sins to trap the Supreme Deity and kill Demon King so that Chaos would return to the world.