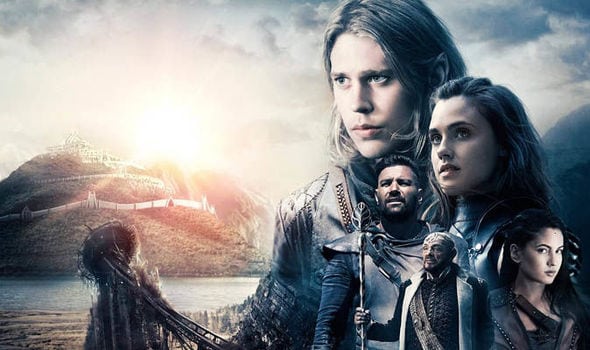 ‘The Shannara Chronicles’ is an American fantasy based TV show, created by Alfred Gough and Miles Millar. It draws inspiration from ‘The Sword of Shannara’ series of novels that have been penned by Terry Brooks. The series has been filmed in New Zealand with Farah Films, Millar Gough Ink, Raygun One, Sonar Entertainment, and MTV Production Development being the production companies.

‘The Shannara Chronicles’ first aired in the US on MTV, but it soon moved on to Spike, which is now known as the Paramount Network. For those unaware, the series first premiered on January 5, 2016. Although the show did not take long to gain a steady fan following, especially among those who had read the books, it did not exactly go down very well with critics, who said that the show appeared to be heavily influenced, and although the elements of fantasy could put it in the same category as the critically acclaimed ‘Game of Thrones‘, the narration and progression required surer footing for the show to truly realize its full potential.

The Shannara Chronicles Cast: Who is in it?

The main star cast of the series comprises of Austin Butler, who plays half human and half-elf, Wil Ohmsford; Poppy Drayton who is seen as the Elven princess named Amberle Elessedil; Ivana Baquero as Eretria, a human who happens to be raised by Rovers-a group of thieves; Manu Bennett as Allanon, a human and the last druid who has been living for more than 300 years.

Aaron Jakubenko plays King Eventine’s son, Ander Elessedil, whereas Marcus Vanco is seen as Bandon, who is an Elvyn gifted to see future when he touches someone. Malese Jow is in the role of a half human and half-elf named Mareth Ravenlock. Vanessa Morgan plays Lyria, a human in a romantic relationship with Eretria and Gentry White plays bounty hunter named Garet Jax.

While these are some of the main characters, the expansive world of the series ensures the need for several supporting and guest characters, who play important roles in their own capacities, and makes the narrative all the more exciting.

The Shannara Chronicles Plot: What it is about?

The main plot of ‘The Shanarra Chronicles’ is basically a fantasy world series that follows an exciting storyline. After the relinquishment of the human race, an Elvin Princess -Amberle, half-elf Wil and Eretria start their journey to find a way out to stop the evil army of demons from taking over the realms. Right at the start, we see demons, who had been banished, returning to the Four Lands. Naturally, it falls upon the protagonist, Wil, to save the realm, and become the hero he was destined to be.

What stands out about the series is its ability to effectively tap into tropes that are going to hold universal appeal. At one level, these tropes include the destiny motif, the motif of a quest, and that of dead parents. At another level, we see the elements of fantasy play out, while these universal motifs unfurl in a world populated by elves, changelings, demons, and gnomes. Despite this, the show falls into the pitfalls of most fantasy shows and becomes predictable.

While several critics have noted that the series has the potential of being a teen-friendly ‘Game of Thrones’ there is frankly no comparison. While the latter has more or less fixated on a chosen character, for now, it was sure to subvert and obscure the very characteristics of the fantasy genre towards the start. ‘The Shannara Chronicles’ makes no such attempt, and perhaps this is why the networks did not take a particular liking to the series, resulting in its frequent change from channel to channel.

However, if we are to compare this series to HBO’s current golden goose, we must also note that ‘The Shannara Chronicles’ does a great job at establishing the kingdom, and building the mythical lore over the seasons. Moreover, it has also shown itself to be capable of sacrificing key characters for the shock value and to ensure that the plot remains fascinating. For gamers, the show almost feels like a fantasy RPG (role-playing game) that we get to see on the television. Sometimes the storytelling feels a little shaky and rushed, but the series has its heart in the right place, with all the racial and sexual diversity that it has tried to include.

When it comes to a balanced critique of the show, one is really torn. On one hand, the show reworks some classic tropes in an interesting manner, and all it asks from viewers is one chance to allow it to dazzle you with the world it portrays. On the other hand, it is cliched in those very tropes and the extremely standard quest journey that it offers up. Although the series has the potential to be going places, it appears that what the fantasy show fails to do is be fantastical.

Variety does a wonderful job of summing up the series, saying, “It’s almost too easy to list the qualities “The Shannara Chronicles” does not possess, originality chief among them. The TV show is based on a series of books by Terry Brooks, who in turn modeled his world closely on that of J.R.R. Tolkien’s “Lord of the Rings” saga. Elves, quests, magic objects and demons are all present and accounted for in this tale. No spoiler alert is needed to point out that the fate of the world hangs on the dangerous quest of an unlikely protagonist. But a television series doesn’t have to be unique to be worth watching, and fantasy fans hankering for a breezy (if low-budget) epic are likely to find things to enjoy in this energetic saga. The subset of TV viewers who liked to spend a lazy Saturday bingeing on the adventures of Xena or watching “Legend of the Seeker” may well enjoy what “The Shannara Chronicles” brings to the elvish council table.”

Since the series does not seem to have a certain future yet, anything about the upcoming season would only be speculative. However, if you want my personal opinion, in a world where ‘The Hunger Games‘ and ‘The Maze Runner‘ franchises have succeeded, ‘The Shannara Chronicles’ holds immense potential. The show targets audiences that would be into fantasy franchises but are likely not to be so affected by the ‘Lord of the Rings‘ as to find this series derivative. Moreover, if a new season does come out, there are plenty of options as to where the story could take us. Since the author has provided plenty of source materials, the show could go in an entirely new direction, and base itself in a totally different setting. Nonetheless, we hope to see more of the fantasy world of Four Lands.

The Shannara Chronicles Season 3 Release Date: When will it premiere?

‘The Shannara Chronicles’ Season 2 premiered on October 11, 2017, and ended on November 22, 2017. Later, On January 16, 2018, it was declared that the series was being canceled after the second season due to its low rating, having managed to engage hardly any audience and that it would be handed over to other networks. Sonar, the production company had already started looking for other networks to take up the show.

Since Netflix, the streaming giant, has the first two seasons of the show, there is a good chance that they might pick up the series, and take it from there. Netflix is always on the lookout for content that will appeal to a younger audience, and this is the kind of show to do that. Amazon too could be a potential option since they are expanding their fantasy repository as well. However, for now, it is too early to tell about any network or platform being finalized. Hopefully, if it gets renewed we might be able to see ‘The Shannara Chronicles’ Season 3 release sometime in 2021, or later. For now, prospects of Season 3 remains uncertain.

While we wait for any kind of update on season 3, check out the season 2 trailer to refresh your memories. If you haven’t seen the show yet head over to Netflix to catch all the episodes of the previous seasons