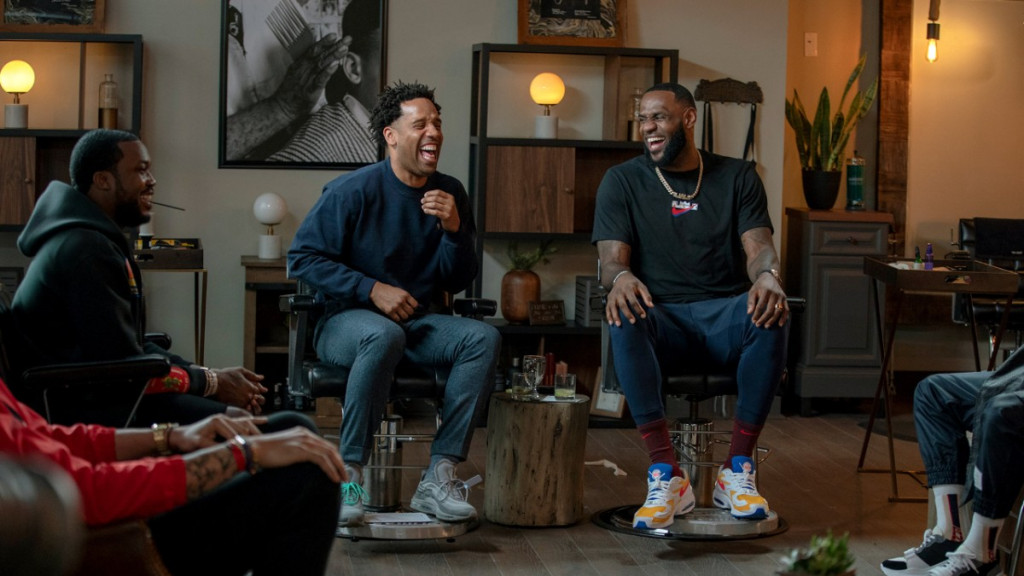 ‘The Shop’ is an American talk show television series that airs on HBO. It debuted on  August 28, 2018. It has been created by Paul Rivera and has LeBron James, Maverick Carter, Peter Nelson and Rick Bernstein as the executive producers. The theme of the series is set in a barbershop where the leads talk and discuss stuff related to world events, music, pop culture, sports and business and so on. It is the place for the experience of a free flow of spirited discussions and conversations. The show was filmed and produced in Los Angeles the previous week and particularly at West Hollywood’s barber-surgeons’ guild.

James described “The Shop” in his words as ”This show is real, it’s candid, and it’s the essence of conversation.” Later, he added something about how social media has taken over the art of actual talking. So, the show is very much about the real world conversation between regular people and how they view it. James also thanked HBO for believing in their idea and providing them the platform for helping them create something special for the generation. Talking about how he got the idea for the show, he said, “when I was a kid, being in barbershops meant listening to adults talk about sports, clothing, politics, music, everything happened in the shop. It was so real and so candid — no one had a sense of, well I can’t be myself here.”

The idea of ‘The Shop’ came out of a previous collaboration between James and Carter called ‘Unscripted’, which gave sports personas like Ronda Rousey a platform to give testimonials and share their experiences. Notably, to gather knowledge on how discussions and entertainment went on in a barber’s shop, the series decided to visit barbershops all around the world so that the expression and showcase of talent could be more real and entertaining.

‘The Shop’ has had two successful seasons so far. Here’s everything we know about the upcoming season.

The Shop Cast: Who is in it?

‘The Shop’ has LeBron James and Maverick Carter as the stars who appear in every episode. Since the format of the show involves guests coming in and having discussions, it is logical to expect the guest stars to change each episode. Some of the notable stars who have been on the show include Snoop Dogg, Nas, Ice Cube, Jamie Foxx, Drake, and Jimmy Kimmel.

In the upcoming season, we hope to see even more stars who will keep the conversation flowing and make the show even more interesting, going forward.

Read More in TV Preview: The Purge | This is Us

The Shop Plot: What is it about?

Every episode of “The Shop” is a mixture of expressions, conversations, and discussions about diverse fields of the modern world, just as the talks go on in a typical, regular barbershop. There are frank talks and opinions being shared while the camera is rolling. It is totally about their viewpoints, contradictions they make and their perspectives on the conversations our generation needs to be involved in right now.

This series gives a real, and unique experience of a barbershop to its audience. Barber shops and the atmosphere in there is incredibly unadulterated and free-flowing, to say the least. It consists of just real people doing some real talking rather than indulging in the social media crisis which has risen above us today.

The cast showcases regular people and their emotions on a subject related to the modern world and a world of crisis as well on the modern sport, politics, pop and contemporary music, business, celebrities, and every other society or cultural event which society covered. The cast has added a real charm to the series. People who have been to a real barber shop in their childhood would recall how life was before we got stuck on social media and how our discussions have ceased to be practical.

HBO describes the show as “The Shop gives viewers a one-of-a-kind barbershop experience, which for many provides a sanctuary for free-flowing and spirited discussions. The series will visit barbershops around the country to gather distinguished individuals who can speak honestly on sports, music, pop culture, world events, business, and other culturally relevant topics.” James also chipped in about his vision aligning with HBO’s, and said, “The Shop is exactly why we created Uninterrupted. Anyone who has been in a real barbershop, like the ones where I grew up, knows why this show can be so incredible. I’m really excited HBO believed in our idea and is helping us create something special.”

What stands out about the show is how the personal facade allows celebrities to speak candidly on matters like race, families, and issues that affect society. While viewers feel like they are in on the conversation, they are not actually in the conversation. However, if there is one part of the show that we keep coming back to, it is the candidness. Slate was very impressed in their appraisal of the show, calling it “an Unfiltered Glimpse Into the Black Experience in Present-Day America”.

Hopefully, the upcoming season will continue in a similar fashion as we see newer guests come and speak their hearts out on the show, and it is necessary to get the perspective of how a black person might be feeling right now, considering the political clime of America.

The Shop Season 3 Release Date: When will it premiere?

‘The Shop’ Season 2 aired on March 1, 2019. While there has been no news of the renewal of Season 3 yet, considering the popularity of the show and its sociopolitical relevance, HBO is likely to greenlight another season. If and when it is greenlit, chances are Season 3 will release sometime in March or April, 2020, since each the seasons have come out every year, up until now, and the production of a show of this format does not take much time.

‘The Shop’ Season 3 does not have a trailer yet. However, you can check out the video below to get a better idea of what the show is about.