The Significance of Stairwell in Severance, Explained

‘Severance’ is a thriller series that follows the employees of Lumon Industries. The corporate giant subjects its employees to an advanced scientific procedure known as “severance,” which separates their work-related memories from personal ones. As the narrative progresses, viewers learn more about severance, the method used to conduct it, and its after-effects.

During the first two episodes, viewers also learn about the severed floors of Lumon and the Stairwell that leads to this space. We are sure viewers must be curious to learn more about the Stairwell, its meaning, and its significance. In that case, here’s our take on the Stairwell’s function and true nature! SPOILERS AHEAD!

What Is the Meaning and Significance of Stairwell?

The Stairwell is first introduced in the series premiere episode of ‘Severance.’ In the episode, Mark Scout leads the orientation of new recruit Helly. Lumon has hired Helly to replace former employee Petey on the Macro data refining team. Helly is assigned to the team that works on the severed floor. On this floor, all the employees have undergone the severance procedure. Therefore, they cannot recollect their personal memories while at work. However, this spatial differentiation of the brain only lasts when a person is on the severed floor. On the other hand, outside work, a person cannot recollect their memories from work. 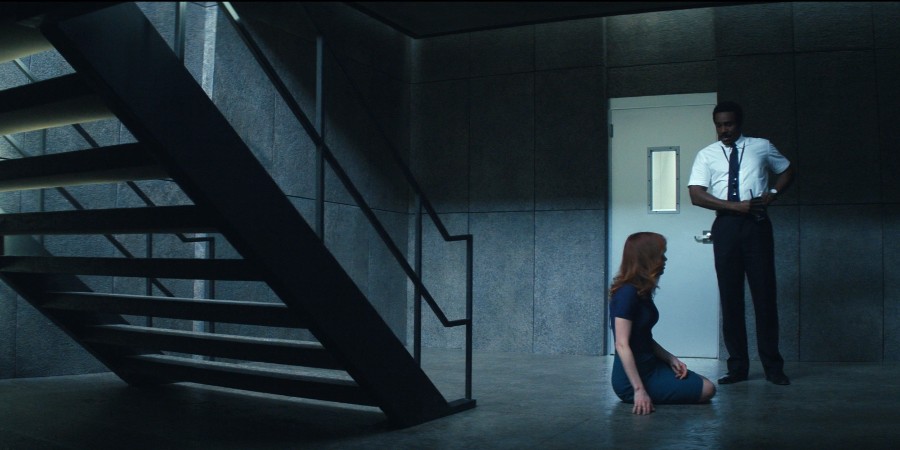 The Stairwell is the gateway to the severed floors of the company. After answering the questions, Mark leads Helly to the Stairwell. After leaving, Helly is drawn back to entering the severed floor multiple times. She is left completely befuddled at this whole phenomenon, not knowing what to make of it. As viewers, we are left wondering what’s the significance of the stairwell.

In reality, the severance process splits a person’s consciousness into two parts. One consciousness exists in the severed space while the other exists in the outside world. Therefore, it can be said that the Stairwell is a tool for aiding a person in switching between the two consciousnesses. After Milchick’s explanation, Helly gets the hang of the process. Earlier, Helly would forget small details that she should be able to retain despite the severance, such as her name. However, after getting accustomed to the severance, she is able to retain such facts, as evident later in the episode.

The previously mentioned scene ends with Helly finding herself in the elevator, suggesting that Helly has mastered the visceral transitioning between her two consciousnesses. The elevator is another gateway to the severed floor but is only effective if a person has accustomed to the process. In that regard, the Stairwell course serves as the final step in the severance procedure. The operation only prepares a person for severance, but the Stairwell actually separates the memories and forms a new consciousness.

Early in the show, it is stated that severance is a permanent process. However, viewers know that Petey has unsevered himself. Therefore, it is safe to say that the Stairwell will play an important role in the show’s future episodes.

Read More: Who Are the Outies in Severance, Explained