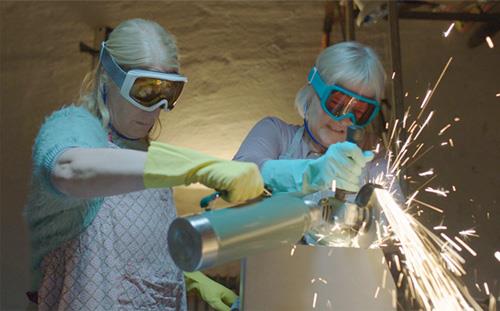 ‘The Simple Heist’ or ‘Enkelstöten’ is a Swedish black-comedy show directed by Felix Herngren and Emma Bucht. It airs on Acorn TV and first premiered on November 15, 2017. The show centers around a math teacher and a gastroenterologist doctor who is suffering from a financial pinch after losing all their savings. Both the ladies are in their mid-fifties who decide to follow a crooked path after serving as respected citizens. However, once they make plans to rob a bank office in Stockholm, they begin to realize just how wrong things can go for them. Notably, the show is based on a book of the same name by Tomas Arvidsson and was first made into a miniseries in the 1980s.

The modern-day adaptation deviates in some aspects but the series brings a touch of unique comedy to entertain the viewers. It has gained more that one million views on SVT after it’s release. “Not pure Swedish comedy,” says Felix, “because it’s too local, but a mixture between the two, drama and comedy, could work abroad I think.” “We tried to work together once, and we fought immediately, so we promised each other not to work together again,” he said, “but this time the process was different and turned out to be therapeutic. This had a healing effect because we could talk about someone else’s relationship that was exactly like ours, but not ours. From being a bit horrifying at first, it went to being something we talked about every minute; when we were waking up, eating breakfast, until late at night.”

The Simple Heist Cast: Who is in it?

The cast of ‘The Simple Heist’ is led by Sissela Kyle as Cecilia Stensson and Lotta Tejle as Jenny. They are the protagonists who decide to get rich quickly as part of their retirement plan. Other major cast members include Tomas von Brömssen as Jan, Ralph Carlsson as Gunnar, Pontus Olgrim as Patrik, Danilo Bejarano as Oscar, David Wiberg as Bengt and Kristin Andersson as Harriet.

The Simple Heist Plot: What is it about?

The Simple Heist revolves around gastroenterologist Cecilia who suffers financially after she loses all her stocks in an investment. She decides to keep it hidden from her husband named Jan. However, things change for her when she comes across her patient Stellan, who is dying and confides in her his plan of robbing a bank. The idea appeals to her and she shares that with her friend Jenny, and together they start planning to rob a bank in Stockholm. They follow a bank worker to get inside the bank safely. Later on, they drug him and take his access card. But everything starts to go wrong when they start executing the heist. They somehow manage to rob the bank, but they are unable to open the locked machine cassettes which contain all the bank money. Finally, with the help of some criminals, they are able to open the cassettes and successfully steal all the money.

The next day, the police find the empty cassettes in the Stockholm bank. Jenny begins panicking when she learns about the police investigation. Later on, Jenny and Cecilia’s lives take a shocking turn when an unknown person starts to blackmail Cecilia. She receives threatening emails from this person who knows their secret, which forces her to think about spilling their robbery secret to the police. Cecilia then meets Jenny to talk about threatening emails.

In the next episode, Jenny and Cecilia agree to share they burgled money with Stellan. But as they are about to give him his share, their money is robbed by the criminals who assisted them to open the locked cassettes. Later on, Cecilia has to bring her grandkids under the surveillance of the criminals unwillingly. She realizes that they are in deep trouble when she uncovers that these are criminals are linked with a dangerous biker gang. In the end, Jenny and Cecilia realize that it is not too late to turn themselves in. They surrender when the police track them down.

The new adaptation varies greatly insofar as it makes the protagonists females instead of males as the book has them. However, the greater success of the show has to be in the comic tone that it maintains throughout. Sweden and places surrounding it are known for Nordic noirs and the gritty quality they bring to their shows is very revealing. The Simple Heist is a welcome change that shows the expanding horizon of their entertainment industry and proves that they can do comedy just as well, with some added twists to keep things all the more interesting. In the upcoming season, we hope the show outdoes itself.

The Simple Heist Season 3 Release Date: When will it premiere?

You can check out the trailer of ‘The Simple Heist’ below. If you have not seen the series, be sure to check it out to get a unique blend of comedy, crime, and drama.