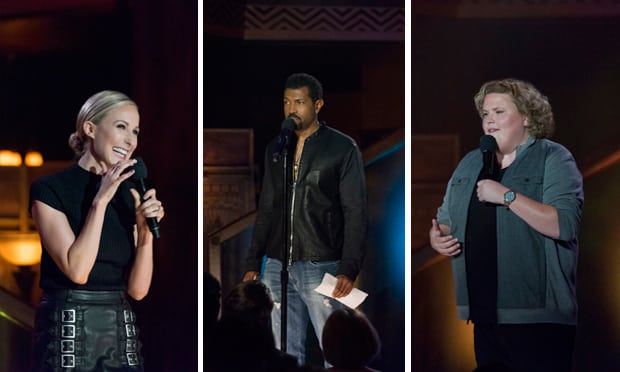 ‘The Standups’ is an American comedy web series that airs on Netflix and first premiered on July 4, 2017. It has been directed by Troy Miller, who is considered to be somewhat of an innovator when it comes to alternative comedy and has worked on shows like ‘The Office‘ and ‘Arrested Development‘.

The premise of this original is about fledgling standups in their liberating monologues. The streaming service makes a compilation of 30-minute recordings of these stand-up comedians and releases them. We see some of the freshest voices taking the stage to share sly jokes, awkward anecdotes, and hilarious confessions.

Every season sees a new roster of comedians presenting their material. Established comics like Bill Hader, Tina Fey, and Amy Poehler have praised the show and encouraged Netflix to continue with it as it gives a great boost and opportunity to untested talents. If you enjoy this show, you can also check out ‘The Marvelous Mrs. Maisel‘ and ‘I’m Dying Up Here‘ which provides a fictional account of what it is like to be a stand-up comedian.

The Standups Cast: Who is in it?

Since ‘The Standups’ gives the stage to some of the freshest voices in the comedy scene in LA, we see different comedians as the cast members in each episode of the seasons of the show. However, in the past few seasons, some of the most notable standouts have been Kyle Kinane, Gina Yashere, and Aparna Nancherla. In their selection of comedians, Netflix has proven that it is wise to have as broad a spectrum as possible so that the jokes are all the more relatable and comedy can be used to its fullest potential, that is, to draw attention to some of the serious topics concerning society.

In this light, Kinane is a more straightforward comedian who likes to jump into his jokes about the oncoming fascist apocalypse. Yashere hits all the nuances as a gay black female immigrant and it is fun to hear the take she has on America. She jokes that she ticks off four out of six of Trump’s phobias. However, Aparna has been the most revelatory for me, since she challenges the very stage presence associated with comedians, that is brash, loud and not afraid to speak up. Here is a woman who takes the stage as a diminutive person and rarely raises her voices, and yet she manages to enthrall the audiences with her performances. One can only hope that we will discover more such treasures in the upcoming season of the show.

The Standups Plot: What is it about?

The official synopsis The Standups’ reads as follows. “It takes time and hard work for comics to reach the point of their careers where they are household names — if they ever achieve that stature. Prior to reaching that level of fame, comics usually spend a lot of time in comedy clubs honing their craft and trying to get noticed by others in the industry who can help boost their profile. A big step in gaining a higher profile is getting a TV special. The Standups”gives some of comedy’s freshest voices on such a stage.”

The series is somewhat of an assertion of the independence from the traditional one hour format used by professional comedians. Under the masterful direction of Miller, each episode’s content and jokes seem to be woven seamlessly into the next, which makes this ideal for binging, which is something that Netflix is always actively trying to promote. While you are in for a treat of completely fresh faces and new content, there is a trade-off involved in the show.

One has to keep in mind going in that the comedians are mostly just starting out, and have thus not yet had a chance to hone their skills. This results in some rough edges that exist in the deliveries and a couple of awkward pauses between jokes, which you will not find in more experienced acts, of maybe Hasan Minhaj or Ricky Gervais. Nonetheless, here you get a wide array of humor, some of it crass, some of it loud, some of it brilliantly dry. Obviously, if you watch the show, you will find yourself gravitating more towards certain comedians whose wit formation appeals to you. That is the ultimate beauty of the show for me, there is something for everyone.

Hopefully, in the upcoming season, the show will continue in a similar manner and we will continue to be amazed by the fresh talent that this series gives a platform to.

The Standups Season 3 Release Date: When does it premiere?

‘The Standups’ Season 2 premiered on March 20, 2018. Netflix has not yet officially renewed the show for another season. However, seeing as how the streaming platform is focused on building its library of stand comedy shows, it is not likely that this gem of a show will be allowed to slip through the cracks. In all likelihood, an official confirmation is taking time since Netflix is looking for talented comedians who can go on stage in the upcoming season. Another season will most likely be greenlit and we can expect ‘The Standups’ season 3 to release sometime in March, 2020. However, do stay tuned for an official update on the release date.

Check out the trailer for ‘The Standups’ Season 2 below. If you have not seen the series, and enjoy a good laugh, be sure to check it out.