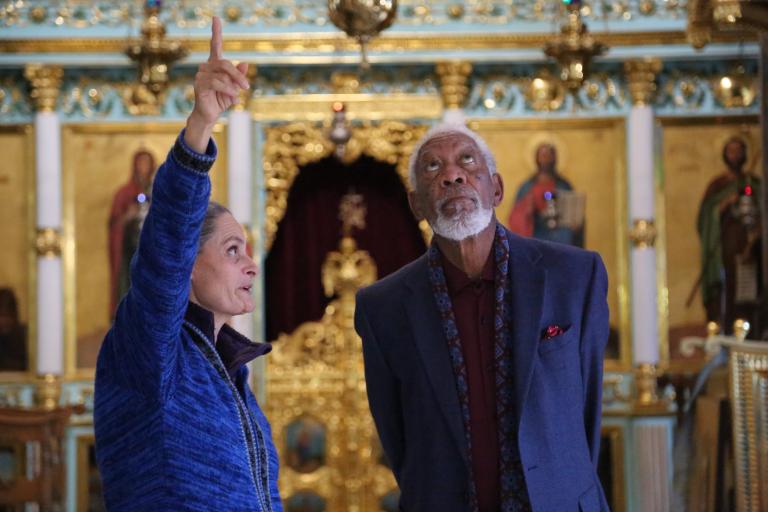 Every human being, no matter how faithful to the higher power he or she is, has at least once in his lifetime questioned whether there is actually an entity who looks after the entire creation and decides the fate of the universe. In the National Geographic documentary seeking the true story of God, Morgan Freeman leads us into the heart of some of the biggest religions in the world. He tries to look deeply into all the rituals, practices, theories behind religion and understand about their beliefs in God. National Geographic released the first season of the series in 2016 and the second season in 2017. While the first Season contained six episodes, the second Season contains three. Nat Geo has announced that the third Season will again cover Freeman’s explorations of the concepts of God and religion in six episodes.

With his impeccable delivery, Morgan Freeman almost brings the audience into his world and takes them on a journey with him. Freeman is himself executive producing the show as he travels around the world to explore themes which make people worship and devote their lives to a higher power. In Season one, Freeman questioned ‘what lies beyond death?’ as he asked priests from various different religions all around the world to explain what their religion has to say about the afterlife and of their versions of heaven and hell. He then inquires into what different religions have to say about the apocalypse, a time when life on Earth would cease to exist. Then Freeman delves into the identity of God in each religion and what different religious doctrines across the whole world have to say about Creation. Another interesting topic Morgan addresses is why evil exists in the first place if God is the root of everything that is happening around us?

‘The Story of God’ has had three successful seasons so far. Here’s everything we know about its upcoming season.

The Story of God Cast: Who is in it?

Morgan Freeman serves as the narrator of the show as he goes all around the world trying to find out the real reason behind the enormous faith, love, and fear of God that has always been present in human civilization. In one of the episodes, Freeman tries to explore the concept of the Devil as present in various religions across the world. He meets a Roman Catholic priest to understand the idea of the Devil in Christianity. Then he talks to a Buddhist priest who performs certain rituals to get rid of any evil energy from the temple.  During the entirety of the season, Freeman mostly interacts with people of faith and also possess extensive knowledge about their religions to give him a clearer picture of what he is looking for. Earlier, Morgan had delved into questions like why each religion has a Messiah or prophet of its own who leads them towards salvation and closer to God? Morgan has also tried to find out the reason behind the concepts of heaven and hell.

There are umpteen number of religions and a larger number of rituals which are all founded on the belief that the creator will be kind to our souls. While the ways are different, the goal is almost the same. The universal language which bonds the human race is the understanding that we are too small in the hands of destiny, and that there is someone more profoundly powerful than us who is controlling everything that we see around us.

The Story of God Plot: What is it about?

Morgan Freeman is on a journey throughout the world to understand how the concept of God has had a huge role to play in the ways in which we understand what we see around us and the methods we choose to deal with it. One of the quotes of Morgan in the show goes, “What happens when someone sees or feels the presence of God?” Morgan obviously is talking about certain people who have said that they have felt the presence of some sort of higher power in their lives. In one of the episodes, he even comes across a woman who claimed that she knew what heaven actually looks like.

Morgan is on a quest to find out whether the different traditions followed in different religions across the world wage a barrier between different civilizations, or do they actually connect us with a higher power whose presence is all-pervasive. A Buddhist monk whom Morgan talks to in the show says, “Your worst enemies are within yourself” suggesting that the human mind is the harvesting ground for all the evil thoughts and desires. Some believe that closeness of God in our lives will help us bury these demons within ourselves. And this is where every religion speaks the same tongue. The destruction of evil comes from the realization that there is a benevolent and kind master whom we need to please. And the only way to do that is to live a life of piety and honor.

A question here is naturally raised- is fear of God the only thing that is preventing human beings from turning into savages and doing what we feel like? Has civilization not yet managed to reach a point when harmony should be maintained only because it makes everyone’s life easy and we do not encroach upon the lives of other human beings because we respect their rights to freedom and free will just like we would want them to respect ours? Religion has indeed become a guiding light for many people and Morgan Freeman, in his journey to find answers about God, is wanting to know the reasons and philosophies behind practises of religion.

The Story of God Season 4 Release Date: When will it premiere?

‘The Story of God’ Season 3 premiered on National Geographic Channel on Tuesday, March 5. The six episodes were telecast weekly. As far as the next season goes, we don’t have an official announcement yet. Though considering the popularity of the show, we would be surprised if it doesn’t get renewed. The first two seasons came within a year of each other, whereas the third came after hiatus of almost two years. Our best guess is that if the show does get renewed, Season 4 of The Story of God can release sometime in Q4 2020.

The Story of God Trailer:

Take a look at the mesmerizing trailer of the stunning show right here: